ACLU Sues Ferguson School District For Having Too Many White People 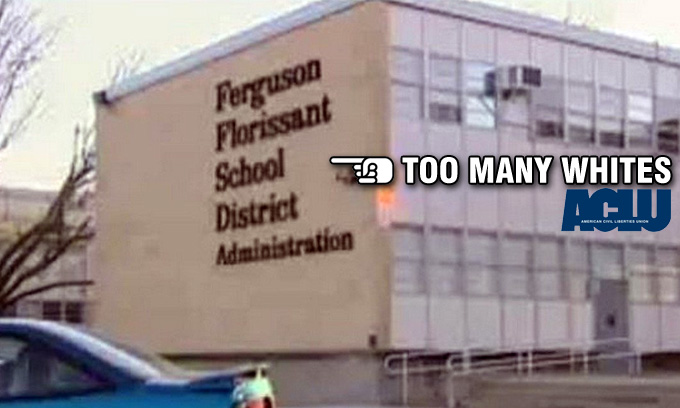 The American Civil Liberties Union (ACLU) filed a lawsuit on behalf of the NAACP against the school district that represents Ferguson, MO. The lawsuit more or less states that there’s just too damn many white people, not just on the school board, but in the voting district as well. It is a legal challenge to democracy brought forth by an organization that champions the Constitution.

The Ferguson-Florissant School District, located in the greater St. Louis area, uses an at-large system to elect the members of its school board. The federal lawsuit claims that this system dilutes the black vote, causing blacks to be underrepresented on the board. Seventy-seven percent of the district’s students are black, but only one of the seven board members is.

Oh no, that sounds bad. What are those dastardly white people doing to steal school board seats away from the black majority? Well, it turns out the blacks aren’t a majority in the school district at all:

While more than three-fourths of the district’s students are black, the area’s voting-age population is majority-white. The ACLU suit contends that the district’s at-large system results in the black vote getting drowned out. It calls for a new system where the district is broken down into sub-regions, each of which would elect one person to the district school board. (my emphasis).

You see, Ferguson-Florissant School District is made up of many communities, not just the embattled town of Ferguson. It was created by a 1975 desegregation order to include diverse communities, and wouldn’t you know it, some of those communities include white people. Even more treacherous is that somehow the whites represent a majority.

So this lawsuit isn’t about giving blacks equal representation, it is about diminishing white voters influence even though there are more of them. Who am I to argue with an organization that claims to champion civil rights, but doesn’t that seem like a civil rights violation against white people?

Besides ignoring the democratic process of holding fair elections, this lawsuit assumes that black people are both interested in public service and vote. The city of Ferguson is majority black and yet the city council is almost entirely white. You can’t chalk that up to gerrymandering or at-large elections. The blacks of Ferguson do not want the low-paying jobs of city council members and they don’t care enough to vote the white people out of office. I’m sure a similar dynamic is in place for the school board.

Let’s look at this from a different perspective. I live in California and I’m a conservative. My vote doesn’t count for jacksh*t. Republicans are severely underrepresented here, but I don’t see the ACLU suing the state to get more GOP candidates in office.

And you know what? That’s fine. There are way more liberal ding-dongs in this state than levelheaded conservatives. I wish it weren’t so, but it is. I chose to live here and I’ve accepted the fact that I’m outnumbered. That’s how democracy works. The will of the people determines who gets elected.

It’s one thing to say votes are being suppressed or candidates are being denied the right to run, but neither of those are the case here. The ACLU is looking to take away a white majority’s voting power and give it to a black minority. No matter how well intentioned they say they are, this is wrong, un-American, and most of all: racist.