Ahmadinejad joins the club, pushes "new world order" (or does he?) 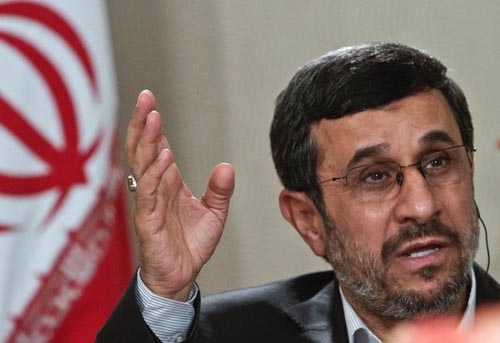 Taking a break from their "coverage" of Syria and Libya in what is seemingly a quest to demonize the whole of the Middle East and North Africa, the mainstream media has returned its gaze to Iranian President Ahmadinejad.

In an interview given to Associated Press in the UN General Assembly, where he will speak on Wednesday, Ahmadinejad fielded questions regarding ’Syria, sanctions and nuclear weapons’.

He spoke of his vision, which AP dubbed his "new world order":

"God willing, a new order will come and will do away with ... everything that distances us," Ahmadinejad told The Associated Press in an interview Tuesday, speaking through a translator. "All of the animosity, all of the lack of sincerity will come to an end. It will institute fairness and justice."

He said the world was losing patience with the current state of affairs. "Now even elementary school kids throughout the world have understood that the United States government is following an international policy of bullying," he said. "I do believe the system of empires has reached the end of the road. The world can no longer see an emperor commanding it."

"Everyone is aware the nuclear issue is the imposition of the will of the United States," he said. "I see the nuclear issue as a non-issue. It has become a form of one-upmanship." Ahmadinejad said he favored more dialogue, even though negotiations with world powers remain stalled after three rounds of high-level meetings since April.

He said some world leaders have suggested to him that Iran would be better off holding nuclear talks only with the United States. "Of course I am not dismissing such talks," he said, asked if he were open to discussions with the winner of the American presidential election.

Israeli leaders, however, are still openly contemplating military action again Iranian nuclear facilities, dismissing diplomacy as a dead end. Israel and many in the West suspect that Iran is seeking to acquire nuclear weapons, and cite its failure to cooperate fully with nuclear inspectors. Iran says its nuclear program is for peaceful purposes only.

Ahmadinejad also proposed forming a new group of 10 or 11 countries to work to end the 18-month Syrian civil war. Representatives of nations in the Middle East and elsewhere would meet in New York "very soon," he said.

Critics have accused Tehran of giving support to Syrian President Bashar Assad in carrying out massacres and other human rights violations in an attempt to crush the uprising against his rule. Activists say nearly 30,000 people have died.

Ahmadinejad said the so-called contact group hopes to get the Syrian government and opposition to sit across from each other. "I will do everything in my power to create stability, peace and understanding in Syria," Ahmadinejad said.

Far from being outlandish or the ravings of a psychotic, Ahmadinejad’s political-speak is neither unreasonable nor far removed from the doctrines of western leaders. In many ways, his suggestions sound downright restrained and moderate, if not more tenable than some of the hardline stances as taken by western governments.

And yet is what Ahmadinejad striving for any different from the goals of other global leaders?

It is of note that nowhere in the article does Ahmadinejad actually SAY "new world order", but suggests ’order’ could hopefully do away with the current chaos. It could be interpreted many ways. The press has ever misinterpreted Ahmadinejad to suit their purposes as illustrated in the GlobalResearch article, "Wiped off The Map”. The Rumor of the Century, Fabricated by the US Media to Justify An All out War on Iran.

Why would AP want to use the term ’new world order’?

For years the words "New World Order" were the realm of "public intelligence analysts" (aka conspiracy theorists), the most famous usage in modern history coming from former US president George HW Bush in 1991. But of late, many leaders have been using the term to describe their plans for the future.

In 2009, former president of the Soviet Union Mikhail Gorbachev said, "Only in cooperation with Russia and the United States can Europe play its role in the global process of creating a new world order."
Also in 2009 globalist billionaire George Soros suggested, “I think you need a new world order that China has to be part of the process of creating it and they have to buy in, they have to own it in the same way as the United States owns…the current order."
At the conclusion of the G20 Summit in London in 2009, then Prime Minister Gordon Brown announced, "I think a new world order is emerging with the foundation of a new progressive era of international co-operation."
Last year the Vatican called for a "New World Economic Order".

It’s interesting that factions which allegedly are diametrically opposed, echo the same world view and sentiment over and over. How can these nations be ’enemies’ when they seem to be working together towards the same goal?

If we listen to what the leaders are actually saying, rather than acknowledge the spin the media gives these words, it’s revealed that there is not much difference among them. And if that’s the case, why the sabre rattling? Why the sanctions? Why the constant threats? Why the NATO bombardments of civilians? Why regime change? Why wars?

Could it be that Amahdinejad and Iran, knowingly or unknowingly, is simply controlled opposition? Perhaps Syria? Perhaps Russia? China? What is being arranged behind the scenes to make it appear as if there is conflict, when in fact they all might be reading from the same script? Did Iran’s President intend to call for a "New World Order", so much like his western opposition? Or was AP stretching and distorting his words?

How often we’re bombarded by dire threats of these nations, these governments, these leaders. Former enemies are ’friends’, former ’friends’, enemies (Al-Qaeda Now a US Ally in Syria). The press puts words in mouths and paints nations good or bad, axis or allies, driving it home with key phrases like ’terrorists’, ’nuclear bomb’, ’new world order’.

In the end the public watches it all unfold, but never with much understanding as to why it needs to happen, or even how to stop it.

Are we simply audience to a grand play for the benefit of the elite?