Oct 26, 2009 Source: space.com
You would think that an unpiloted space plane built to rocket spaceward from Florida atop an Atlas booster, circle the planet for an extended time, then land on autopilot on a California runway would be big news. But for the U.S. Air Force X-37B project — seemingly, mum's the word. 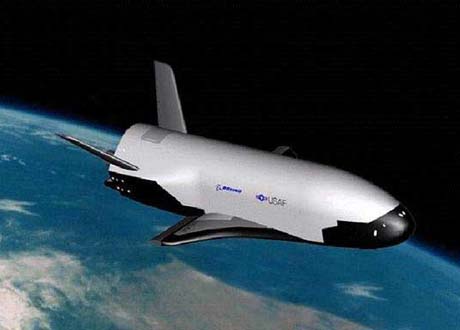 Now being readied for an orbital shakeout, the X-37B (shown here in an illustration) is an unpiloted military space plane. Launched from Florida, the vehicle will make an auto-touchdown in California. Credit: USAF
There is an air of vagueness regarding next year's Atlas Evolved Expendable launch of the unpiloted, reusable military space plane. The X-37B will be cocooned within the Atlas rocket's launch shroud — a ride that's far from cheap.

While the launch range approval is still forthcoming, SPACE.com has learned that the U.S. Air Force has the X-37B manifested for an April 2010 liftoff. 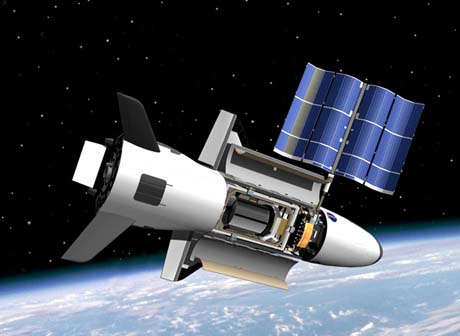 NASA's Marshall Space Flight Center image shows on-orbit functions for the reusable X-37 space plane, now under the wing of the U.S. Air Force. Credit: NASA/MSFC.
As a mini-space plane, this Boeing Phantom Works craft has been under development for years. Several agencies have been involved in the effort, NASA as well as the Defense Advanced Research Projects Agency (DARPA) and various arms of the U.S. Air Force.

Over the last few months, I've been in touch with DARPA, Boeing, the Pentagon, the U.S. Air Force Space Command, as well as NASA itself. Either you get a "not in our portfolio" or are given a "go to" pass to another agency. Just a few weeks ago, I even commandeered a face-to-face "no comment" from a top Pentagon official for Air Force space programs about X-37B.

The tight-lipped factor surrounding the space plane, its mission, and who is in charge is curious. Such a hush-hush factor seems to mimic in pattern that mystery communications spacecraft lofted last month aboard an Atlas 5 rocket, simply called PAN. Its assignment and what agency owns it remains undisclosed.

But in a brief burst of light eking from the new era of government transparency, I did score this comment from NASA.

While the program is now under the U.S. Air Force, NASA is looking forward to receiving data from the advanced technology work.

"NASA has a long history of involvement with the X-37 program. We continue to monitor and share information on technology developments," said Gary Wentz, chief engineer Science and Missions Systems Office at the NASA Marshall Space Flight Center. "We are looking forward to a successful first flight and to receiving data from some advanced technologies of interest to us, such as thermal protection systems, guidance, navigation and control, and materials for autonomous re-entry and landing."

The vehicle itself is about 29 feet long with a roughly 15-foot wingspan and weighs in at over five tons at liftoff. Speeding down from space, the craft would likely make use of Runway 12/30 — 15,000 feet long by 200 feet wide — at Vandenberg Air Force Base in California.

Vandenberg serves as an emergency space shuttle landing strip, as a second backup after California's Edwards Air Force Base – which has also been noted as a landing spot for the X-37B.

Once in orbit, what such a vehicle might enable depends on the eye of the beholder. Intelligence gathering, kicking off small satellites, testing space gear are feasible duties, as is developing reusable space vehicle technologies.

The mission of the RCO is to expedite development and fielding of select Department of Defense combat support and weapon systems by leveraging defense-wide technology development efforts and existing operational capabilities.

"The problem with it [X37-B] is whether you see it as a weapons platform," said Theresa Hitchens, former head of the Center for Defense Information's Space Security Program, now Director of the United Nations Institute for Disarmament Research (UNIDIR) in Geneva, Switzerland.

"It then becomes, if I am not mistaken, a Global Strike platform. There are a lot of reasons to be concerned about Global Strike as a concept," Hitchens told SPACE.com.

The implications of the program as a possible space weapon are surely not lost on potential U.S. competitors, Hitchens said, who may well see anti-satellites (ASATs) as a leveler.

"Would this thing be vulnerable to ASATs? Yes, if it stayed on orbit any length of time," Hitchens added. "While I see value of such a platform as a pop-up reconnaissance or even communications platform, if weaponized it becomes yet another reason for other nations to consider building dangerous ASATs," she cautioned.

Another mission question is, to what extent the X-37B might play into the recent announcement that NASA is partnering with the U.S. Air Force Research Laboratory to develop a technology roadmap for the commercial reusable launch vehicle, or RLV, industry.

All that said, and after years in the making, the X-37B is approaching its first globe-trotting, milestone making and historic flight – that much is known.

Kathleen McErlain - Too Many Secrets, Humanity's Fight to Expose The Secret Underground Worlds

Ted Twietmeyer - What NASA isn't Telling you about Mars