Jan 3, 2013 By Henrik Palmgren | redice.tv
New Mexico plays host to many mysterious events and locations, such as the famous ’Roswell Incident’ and the strange disappearance of the "ancient strangers" - the Anasaz .

Yet another bizarre feature in the New Mexico desert is worth a look.

The Church of Spiritual Technology, believers in the Scientology religion and scripture, owns the base (and underground vaults) near Trementina, New Mexico.

The purpose of the base is reportedly to "provide storage space for an archiving project to preserve Scientology founder L. Ron Hubbard’s writings, films and recordings for future generations. Hubbard’s texts have been engraved on stainless steel tablets and encased in titanium capsules underground." (Source) 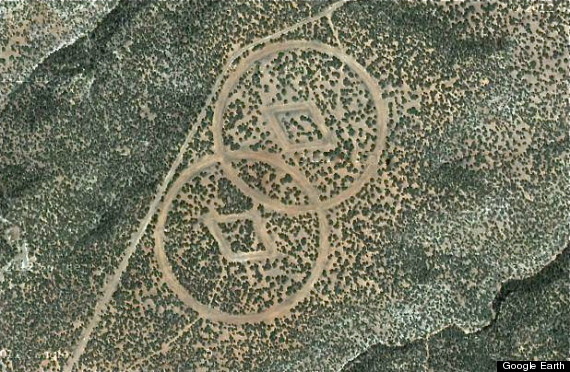 A BBC reporter with close ties to the Church of Scientology, which claims members like Tom Cruise, John Travolta and Kirstie Alley, alleges that the church has constructed an “alien space cathedral” in the desert of New Mexico.

According to John Sweeney, who previously investigated the church for the 2007 BBC television documentary “Scientology and Me,” the site in New Mexico site is called Trementina Base and features large-scale geometric shapes that resemble crop circles. The huge inscriptions – two overlapping circles with diamonds at their center – measure 22 miles across and were allegedly created as a coded message to aliens.

But, Sweeney writes in his new book, "Church of Fear: Inside the Weird World of Scientology,” the circles are only a signpost for what’s hidden underground. In an excerpt published by the Sun, he describes how the site was built in the 1980s, at a cost of “millions of dollars,” to protect sacred church teachings in the event of a nuclear holocaust.

Sweeney claims that one of his primary motivations for the trip was witnessing evidence of the church’s belief in aliens. 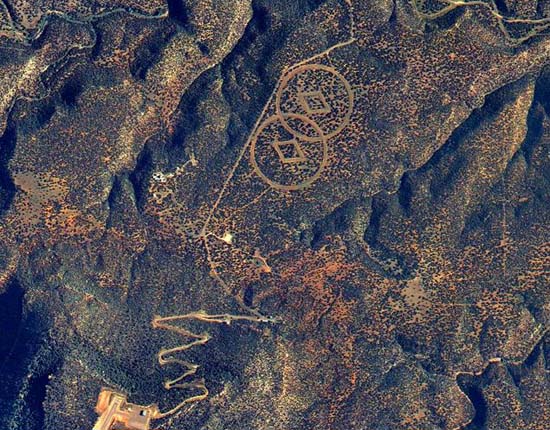 An ariel view of Trementina Base, in the New Mexico desert, where the Church of Scientology has allegedly carved a huge message visible from space. The site is said to house the writings of the shadowy religion’s founder, L. Ron Hubbard. Source

The base itself is not new, but speculation has renewed over the strange symbols drawn into the New Mexico desert. What is the meaning and purpose of the large geoglyphs?

The glyphs were originally reported by the media in 2005, and even though the Church of Scientology has created them so big as to be clearly visible from high altitude, they apparently wanted them to remain a secret to the earthbound:

According to a Washington Post report, the Church’s first reaction was to attempt to suppress the information:

The church tried to persuade station KRQE not to air its report last week about the aerial signposts marking a Scientology compound that includes a huge vault "built into a mountainside," the station said on its Web site. ... Based in Los Angeles, the corporation dispatched an official named Jane McNairn and an attorney to visit the TV station in an effort to squelch the story, KRQE news director Michelle Donaldson said.

The symbol itself is the logo of the Church of Spiritual Technology, but there are theories as to why the symbols would need to be displayed in such a manner:

Former Scientologists familiar with Hubbard’s teachings on reincarnation say the symbol marks a "return point" so loyal staff members know where they can find the founder’s works when they travel here in the future from other places in the universe.

"As a lifetime staff member, you sign a billion-year contract. It’s not just symbolic," said Bruce Hines of Denver, who spent 30 years in Scientology but is now critical of it. "You know you are coming back and you will defend the movement no matter what. . . . The fact that they would etch this into the desert to be seen from space, it fits into the whole ideology."

Logo of the Church of Spiritual Technology

The twin circles are sometimes known as Vesica Piscis. This is the intersection of two circles, which can represent many things, including solar or lunar eclipses, openings or gateways, sacred mathematics, geometry, and architecture.

Like the circle and the vesica piscis, the Diamond, or Lozenge, has many meanings.

"The lozenge motif dates as far back as the Neolithic and Paleolithic period in Eastern Europe and represents a sown field and female fertility. [...] In 1659, philosopher Sir Thomas Browne published The Garden of Cyrus subtitled The Quincunciall Lozenge, or Network Plantations of the Ancients where he outlined mystical interconnection of art, nature and the Universe. He suggested that ancient plantations used the quincunx pattern that revealed the "mystical mathematics of the city of Heaven"[4] and proof of the wisdom of God."

The symbol can represent honesty and constancy and it can be a token of noble birth. The shape is not restricted to any religion or belief, in fact it is used more frequently than not in heraldry, decoration, and religious art around the globe. The lozenge is often employed due to its pure symmetrical mathematical structure.

In an age where underground bases and vaults (WhiteHouse underground tunnels, Site 911 in Israel, excavations under the Basilica by the Vatican) are becoming standard operating procedure for government and religious institutions, the public might do well to pay attention to the symbols that go along with such plans.

Perhaps their behaviour and messages are signalling more than we think.