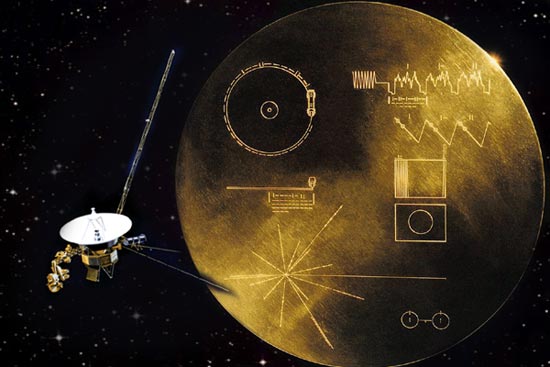 Aliens have hijacked a Nasa spacecraft and are using it to try to contact earth, a UFO expert has claimed.

Hartwig Hausdorf, a German academic, believes that the reason Voyager 2, an unmanned probe that has been in space since 1977, is sending strange messages that are confusing scientists, is because it has been taken over by extraterrestrial life.

Since its launch, Voyager 2 has been sending streams of data back to Earth for study by scientists, but on April 22, 2010, that stream of information suddenly changed.

Nasa claimed that a software problem with the flight data system was the cause but Mr Hausdorf believes it could be the work of aliens.

This is because all other parts of the spacecraft appear to be functioning fine.
He told the German newspaper Bild: "It seems almost as if someone has reprogrammed or hijacked the probe – thus perhaps we do not yet know the whole truth.”

Voyager 2 carries a disk with greetings in 55 languages on it in case the craft encounters other life forms.

Dr Edward Stone, a scientist on the project, said the desk, called the Golden Record, is "a kind of time capsule, intended to communicate a story of our world to extraterrestrials.

"The Voyager message is carried by a phonograph record-a 12-inch gold-plated copper disk containing sounds and images selected to portray the diversity of life and culture on Earth."

left Earth 33 years ago, now it’s claimed the Voyager 2 spacecraft may have been hijacked by aliens after sending back data messages NASA scientists can’t decode.

NASA installed a 12-inch disk containing music and greetings in 55 languages in case intelligent extraterrestrial life ever found it.

But now the spacecraft is sending back what sounds like an answer: Signals in an unknown data format!

The best scientific minds have so far not been able to decipher the strange information – is it a secret message?

Alien expert Hartwig Hausdorf said:"It seems almost as if someone had reprogrammed or hijacked the probe – thus perhaps we do not yet know the whole truth" Read more in Bild.

Engineers are working to solve the data transmissions from the Voyager 2 spacecraft near the edge of the solar system, NASA’s Jet Propulsion Laboratory said today.

The spacecraft late last month began sending science data 8.6 billion miles to Earth in a changed format that mission managers could not decode.

Engineers have since instructed Voyager 2 to only transmit data on its own health and status while they work on the problem.

Launched in 1977, Voyager 2 and its twin, Voyager 1, explored the giant planets Jupiter, Saturn, Uranus and Neptune and kept on going. Nearly 33 years later, they are the most distant human-made objects.

Voyager 1 is 10.5 billion miles from Earth and in about five years is expected to pass through the heliosphere, a bubble the sun creates around the solar system, and enter interstellar space.