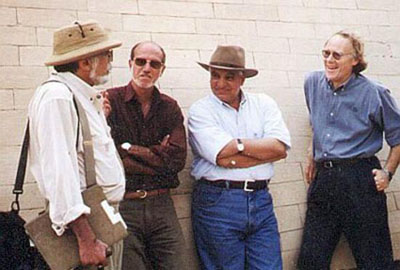 Get the popcorn, things are about to get interesting. Robert Bauval, who has locked horns with Egyptologist Zahi Hawass regularly over the past two decades since he proposed the ’Orion Correlation Theory’ explanation of the Giza pyramid layout, has just posted the following statement to his Facebook account:

I have instructed my lawyers to collaborate with a legal cabinet in Egypt to prepare a libel and defamation case against Zahi Hawass. The direct and open accusation Mr. Hawass has made against me are:

(1) That I collaborated and paid the two german amateur archaeologists to steal the cartouche of the pharaoh Khufu inside a relief chamber of the Great Pyramid.

(2) That I wrote a book/s claiming that the "Jews" built the Pyramids of Egypt.

(3) That myself and my family are of the Jewish Faith. (I am a Christian Catholic).

These accusations are totally and utterly false. Accusations (1) and (2) are exptremely damaging to my person and my work. All three accusation also put me in grave danger in Egypt which has been gripped by dangerous Islamists who are anti-Semitic/Jewish. [...]