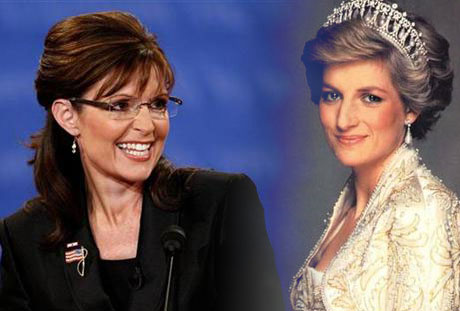 The governor of Alaska and the princess are tenth cousins, while Palin and Roosevelt are ninth cousins once removed, said Ancestry.com, online genealogists based in Provo, Utah.

The genealogical connections are not the first to gain attention in the U.S. presidential campaign. Last year, Lynne Cheney said she found while tracing her family roots that her husband Vice President Dick Cheney was a distant cousin of Democratic presidential nominee Barack Obama.

"When you've got candidates who have deep roots in America, there's a good chance that they're going to have some famous cousins," said Ancestry.com's chief family historian Megan Smolenyak.

"We've all got literally millions of cousins. The trick is finding that one little connection that results in something like Sarah Palin being related to FDR or Diana," she said.

Palin and the late princess descended from John Strong and his wife Abigail Ford, Ancestry.com said.

Strong was born around 1605 in England and emigrated to the United States, where he died in Massachusetts in 1699, Ancestry.com said.

alin and Roosevelt share ancestor John Lothrop, who was born in England in 1584 and also emigrated to America, where he died in Massachusetts in 1653, Ancestry.com said.

Obama, the son of a white woman from Kansas and a black man from Kenya, can call six U.S. presidents, including George W. Bush, his cousins.

"His kinships are across the political spectrum,"