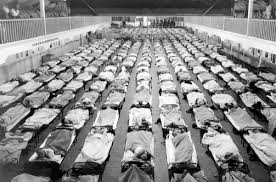 The extinct influenza virus that caused the worst flu pandemic in history has been recreated from fragments of avian flu found in wild ducks in a controversial experiment to show how easy it would be for the deadly flu strain to reemerge today.

Scientists said the study involved infecting laboratory ferrets with close copies of the 1918 virus – which was responsible for the Spanish Flu pandemic that killed an estimated 50 million people – to see how easy it can be transmitted in the best animal model of the human disease.

But other researchers have denounced the research as foolhardy and dangerous. Critics said that any benefits of the attempts to recreate 1918-like flu viruses from existing avian flu strains do not justify the catastrophic risks if such a genetically engineered virus were to escape either deliberately or accidentally from the laboratory and cause a deadly influenza pandemic.

However, Professor Yoshihiro Kawaoka of the University of Wisconsin-Madison dismissed the criticisms of his research saying that it is necessary for the development of influenza vaccines and other countermeasures designed to minimise the risks of a future flu pandemic.

“These critics fail to appreciate the precautions and safeguards built into our work, the regulation, review and oversight these studies receive….The risks of conducting this research are not ignored, but they can be effectively managed and mitigated,” Professor Kawaoka said.

Robert Kolter, professor of microbiology at Harvard Medical School, said: “The scientists doing this work are so immersed in their own self-aggrandisement, they have become completely blind to the irresponsibility of their acts. Their arguments in favour of such work, i.e. increase ability for surveillance, remain as weak as ever.”