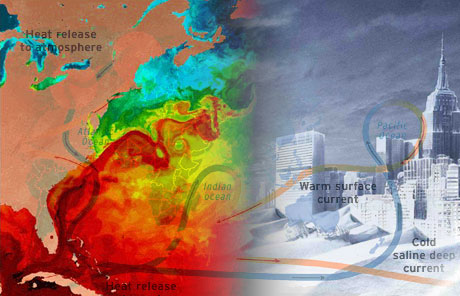 It was the biggest climate event of the last 10,000 years and caused the most dramatic change in the weather since humans began farming. And it may yet hold important lessons about climate change in the 21st century.

Just over 8000 years ago, a huge glacial lake in Canada burst, and an estimated 100,000 cubic kilometres of fresh water rushed into the North Atlantic. Researchers now say they know for sure that this catastrophic event shut down the Gulf Stream and cooled parts of the northern hemisphere by several degrees for more than a hundred years.

They say the findings show modelling studies are right to suggest that something similar could happen with equal abruptness as the planet warms under human influence. The film The Day After Tomorrow, which portrays such a scenario, may have exaggerated – but not by much.

Lake Agassiz was a giant lake that formed at the end of the last ice age as the huge Laurentide ice sheet melted (see a simulation of the process Video). The lake occupied most of the modern-day Canadian Midwest between the Hudson Bay and the US border.

Freshwater flood
Climate historians have previously established that the lake burst suddenly, emptying down the Hudson Strait and into the Labrador Sea west of Greenland.

This is very close to a key point in the global ocean circulation system, where Atlantic water brought north on the Gulf Stream freezes, and dense, saline, leftover water plunges to the ocean floor.

Investigators have speculated that the huge slug of water from the emptying lake could have refreshed the ocean water so much that this plunging ceased, shutting down the circulation, including the Gulf Stream, which keeps countries around the North Atlantic warm.

That, they said, would explain why Greenland ice cores show temperatures in the area plummeting by up to 8 °C.

Now Helga Kleiven at the University of Bergen in Norway and colleagues claim to have found proof that this is exactly what happened.

Abrupt changes
They carried out a detailed study of sediments on the floor of the Labrador Sea and found clear signs of major changes exactly when the lake emptied and the temperatures dropped.

The changes include a flood of fine sediment from the land, coinciding with a sharp drop in the amount of particles of magnetite normally carried to the area by deep ocean currents. The study also shows that the changes were abrupt, happening within a decade or so, in warm climate conditions not unlike those of today.

Modern concerns arise because melting ice, especially on Greenland and in Siberia, is making the North Atlantic less saline. Oceanographers worry that this might eventually be sufficient to shut down the ocean circulation, says Kleiven, just as happened 8000 years ago, "particularly given the concerns about the impact of future warming on the Greenland ice sheet."

The next step, Kleiven believes, is to use the findings to work out exactly how much freshwater may be needed to shut down the circulation.