Antidepressants Now MOST Prescribed Drug Of All 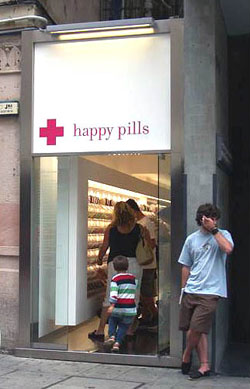 This past week the CDC released some very shocking news - antidepressants are now officially the most prescribed drugs on the market today.

And why is that news shocking? Let's take a look at the facts:

#1 In 2004 the FDA began to warn the public that they were seeing an increase in suicides among youth with the use of antidepressant medications.

#2 In 2005 the official warning came from the FDA that antidepressants double the rate of suicide for those under age 18. This was a sweeping warning for any antidepressant ever introduced to the market and any to ever be approved in the future. (This warning was the next closest thing they could impose next to an outright ban of the drugs.)

#3 The FDA also warned all users of these drugs at the same time that any abrupt change in dose of one of these drugs, whether increasing or decreasing the drug, could produce suicide, hostility or psychosis.

#4 In December 2006 the warning for increased suicide was extended by the FDA to anyone under the age of 25.

#5 In August 2007 Dr. Thomas Insel, head of the National Institute of Mental Health in speaking of new studies being conducted with the use of Ketamine ("Special K" is the street name for this sister drug to PCP - Angel Dust) in the treatment of depression said that antidepressants produce the same effect as Ketamine. The only difference noted was that Ketamine produced these effects instantly where antidepressants take a few weeks to produce that effect. They were impressed that Ketamine would rid a patient of depression immediately where the antidepressants would take several weeks to do the same, yet when one is aware that Ketamine and PCP are dissociative anesthetics, no one would expect the patient to FEEL anything! [For two decades I have warned that these antidepressants are much too similar in action to the hallucinogens PCP and LSD.]

#6 The news came out in January 2008 that the initial studies done on antidepressants demonstrated that these drugs are of no more benefit than a placebo. Why was no one aware of that? Doctors and patients were no aware of this because the very large majority of the negative studies were never made public.

#7 Although the benefit of antidepressants is non-existent, these drugs have a very long list of serious and very deadly side effects.

#8 The most popular antidepressant on the market, Effexor, now has "homicidal ideation" (obsessive/ruminating thoughts of killing and how to kill) listed as a side effect. The manufacturer had this data for over a decade, yet they chose to not disclose that until a few years ago. Before that warning was added: [I will mention just a handful of cases of professionals who should have known.]

Andrea Yates, a nurse, drowned her five children while taking this drug. Then, while Andrea's case was in court a female doctor in Illinois on the same drug, killed one son and severely injured another. In Tennessee another female doctor also on Effexor slit her 7 year old son's throat and then her own. And then it really hit home for Wyeth when one of their own employees, Cassandra Burgess, whose job it was to take adverse reaction reports on Effexor was killed along with her parents and daughter by her husband who was taking Effexor. He then took his own life. So even though she heard the adverse reports daily on Effexor she still missed the signs in her own husband (although they were there if you knew what signs to look for) soon enough to save herself and her family.

The role of the FDA is to judge the risk to benefit of medications. After seeing the studies demonstrating no more benefit than a placebo, yet deadly enough to produce brutal homicides, why are these drugs still on the market? And why on earth are they the most popular medications?! And the biggest question of all . . . WHY IS IT OKAY IN AMERICA OR ANYWHERE ELSE TO HAVE PRESCRIPTION MEDICATIONS THAT CAN PRODUCE HOMICIDAL TENDENCIES AS A SIDE EFFECT ???????!!!!!!!!!!!!!!!!!

We now have medical studies showing that antidepressants:

- are of no more benefit than a sugar pill

- keep patients from forming or maintaining meaningful romantic relationships and that marriage relationships of 40 + years suddenly end with the numbness that comes from these drugs thus destroying many families via divorce.

- produce amazingly high incidents of psychotic breaks leading to an increase in Bipolar Disorder of over 4000% in one decade!

- double the level of cortisol with one dose (steroid effect)

- produce Diabetes, Alzheimer's, Autism, Fybromyalgia - all of which have skyrocketed in the last two decades that these drugs have become so widely used

All of this helps to answer the question everyone is asking, "What on earth is happening to our world?!"

And once again I ask the same question I have asked for two decades now, "WHY are the antidepressants still on the market?"

[For any scientific material backing up ANY of the above statements please feel free to contact me.]

Ann Blake-Tracy, PhD, Executive Director, International Coalition for Drug Awareness www.drugawareness.org & www.ssristories.org Author of Prozac: Panacea or Pandora? - Our Serotonin Nightmare & the audio, Help! I Can't Get Off My Antidepressant!!! (800-280-0730)