Dec 22, 2006 Source: iht.com
Thanks to Greg over at Occult of Personality for the heads up on this article. 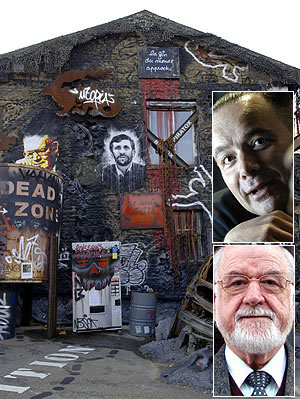 A replica of the World Trade Center ruins is the last thing you expect to find in a tranquil corner of provincial France. Yet there it is, along with a sign that reads: "The end of the world is nearing."

This is the Abode of Chaos — art gallery extraordinaire or the local eyesore, depending on who you ask. Twisted car carcasses are heaped in the yard, and the water in the swimming pool out back is tinted a murky blood red. Portraits of Osama bin Laden and other terrorists gaze down at passers-by.

Just a few years ago, the Abode of Chaos was a charming 17th-century residence, perfectly at home on a street of well-preserved farmhouses, golden-hued stone walls and pansies in window boxes.
The Abode's creator, eccentric entrepreneur Thierry Ehrmann, has been locked in a legal battle with the mayor's office in this town of 1,100 outside Lyon, in central France, and the trial has made its way to France's highest court.

The case has sparked heated debate, in court, in blogs, on petitions. Is the Abode of Chaos art? And what neighbor, no matter how open-minded, would want to wake up every morning to Ehrmann's vision of the apocalypse?

"He has the right to call it art," said neighbor Marie-Laure Houelle. "We have the right not to like it."

Mayor Pierre Dumont is enraged that Ehrmann imposed his vision on the townspeople, and that he didn't seek permission to blacken his home's golden stone walls, cover the house with graffiti and build a mock oil platform on top of it.

Now, hordes of visitors — 80,000 so far this year — appear on the weekends, when the Abode is open for free admission.

"This is a little village that is asking only one thing: To be left in peace," said Dumont, a soft-spoken man who keeps drawings by local children on the walls of his office.

Ehrmann, though frustrated that the case is dragging on, is delighted that his creation could set a legal precedent. He compares it to the historic Brancusi affair in the 1920s, when U.S. customs officials refused to let one of sculptor Constantin Brancusi's abstract designs into the country duty-free — they claimed it was just a metal object, not art. A court eventually ruled that abstract forms could qualify as art, stretching its legal definitions.

"The most important purpose of a work of art is to raise questions," Ehrmann said in an interview in his office, where he has to climb over his donut-shaped desk to reach a swivel chair in the center. "A work of art that raises no questions is not a work of art."

The legal spat began with a suit by the mayor's office. In February, Ehrmann was fined and ordered to put the Abode back in its original state. Then a Lyon appeals court ruled in September that the Abode was a form of art and could remain as is, though Ehrmann was ordered to pay €200,000 (US$266,000) for failing to get authorization for construction.

Prosecutor Jean-Olivier Viout sent the case to the Court of Cassation, the highest French court. He wants judges to address an overarching question: Do the courts even have the right to define what is art? No date has been set yet for a ruling.

In the meantime, it's business as usual at the Abode — which is also Ehrmann's home as well as the headquarters of his holding company, Server Group. The staff works in rooms where red paint trickles down the windows. Employees in headsets type in a room covered by a larger-than-life mural of Dutch right-wing firebrand Pim Fortuyn lying in a pool of blood after his 2002 assassination.

There are also several murals showing the Sept. 11 attacks — an event that Ehrmann sees as a defining moment of modernity, the wellspring of all current geopolitics, and thus an important subject for art.

Constantly in evolution, the Abode now houses more than 2,500 works, mostly by underground artists but also a few well-established figures, including the Nice, France-based artist Ben Vautier, known for his slogans written white-on-black, such as "Art does not exist."

Recognition has come from some unexpected quarters: A lawmaker has asked the Culture Ministry to deem the Abode a protected monument. And a menacing steel bunker conceived for the project was even displayed outside the Grand Palais in Paris.

Ehrmann, 44, is a sculptor as well as the founder of Artprice.com, which surveys the global art market. A Freemason who is fascinated by alchemy, he wears only black and has his hair styled in a long, braided rattail.

He is also the 237th richest businessman in France, according to Challenges magazine's 2006 survey, and he has poured nearly €4.5 million (US$6 million) into the Abode.

Ehrmann sees his struggle as a battle between modernists and traditionalists in a country that he calls "incapable of imagining change."

He believes there is a "great French malaise, which is to be a great artistic nation no longer." Instead of nurturing contemporary artists, he says, France's art world is fixated on the geniuses of the past, from David to Matisse. Beauty is irrelevant in contemporary art, he says, and it must not be designed to please the crowds that tromp through museums.

People often ask Ehrmann why he didn't put his project in one of France's depressed, run-down suburbs, where it would be an asset to the community and less out of place. He says he created the Abode specially for Saint-Romain — the clash with the peaceful town is part of the point.

Out front, on the Abode of Chaos' entry gate, a graffiti tag sums it up best: "War in progress." 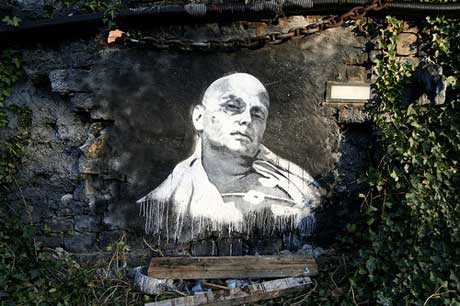