Australian Election 2016: How Pauline Hanson made her political comeback

"Have a look at the vote I've pulled, and it will tell them they are clearly out of touch with the Australian people," she told a media conference in Brisbane on Monday.

"I think what One Nation was saying, and I think what was resonating in the hearts of middle Australians, they wanted somebody to say it — they wanted tougher borders," he told 7.30.

After almost 20 years out of the spotlight Ms Hanson is getting ready to storm back into Canberra, with Peter Slipper's former staffer James Ashby as her advisor.

Her party One Nation won possibly two Senate seats in Saturday's election — she says it could be as many as six.

Ms Hanson's re-emergence may have been a shock to many, but on Saturday night in Ipswich she said: "I've been working at this for the last 18 years."

Despite having very little presence at polling booths, Ms Hanson's One Nation party scored 9 per cent of the Queensland Senate vote.

Orchestrating her campaign was Mr Ashby, a one-time staffer for Mr Slipper who accused the former speaker of sexual harassment.

"I'd made a phone call to the office, these guys were really in desperate need of signs and after all my shit I started a company," Mr Ashby said in a speech to the Hanson camp on Saturday night.

"I never anticipated ever coming back to politics." 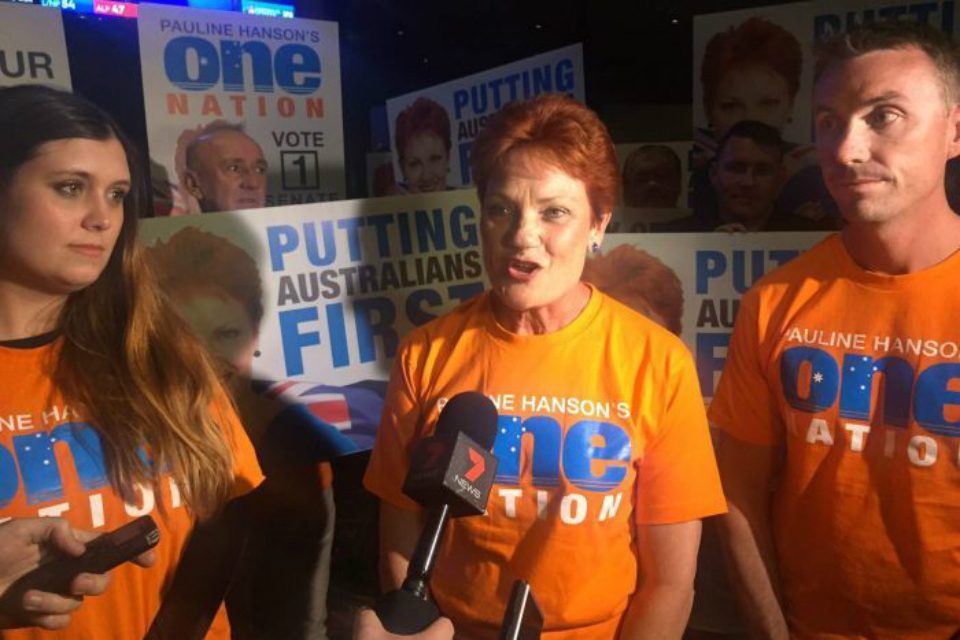 "Pauline Hanson is, as far as we are concerned, not a welcomed presence on the Australian political scene," he said.

"You've got to remember she was chucked out of the Liberal Party."

"Since Malcolm Turnbull said she wasn't welcome in Parliament she's been getting 10,000 new likes a week on Facebook. The audience reach is about 4 million people a week around Australia," One Nation's national secretary Saraya Beric said. 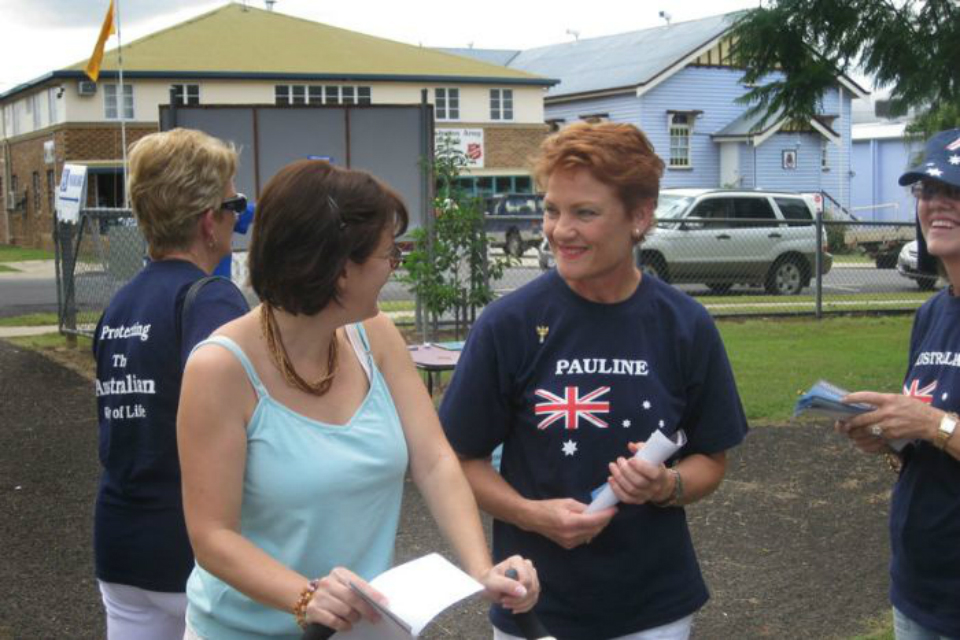 "With the change of leadership from Tony Abbott to Malcolm Turnbull, you've gone from more conservative to more cosmopolitan, and that's not the sort of territory that these sort of voters are comfortable with, so they were up for grabs again," Mr Young said.

"You could save a lot of money on focus groups just by employing Pauline Hanson and asking her what she thinks, because she just has this unique genius of channelling what the average person in the average town pub is saying, or the local shopping centre or the kindy, and she has no hesitation in saying it."

Greens MP Adam Bandt said Mr Turnbull bore some responsibility for Ms Hanson's resurgence by calling a double dissolution and making it easier to get elected with a smaller vote.

"And during the course of the campaign he didn't stand up to the hard right in his party and call out the likes of Peter Dutton, when frankly they resorted to racism to try and win votes," Mr Bandt said.

'We are in danger of being swamped by Asians'

Ms Hanson caught the nation's attention in 1996 when she was dumped by the Liberal Party for comments about Aboriginal people and then ran as an independent.

The new member for Oxley sparked more controversy with her maiden speech, in which she famously declared: "I believe we are in danger of being swamped by Asians."

"She was attacked, I got attacked too of course for being racist," Mr Pasquarelli said.

"Now she is calling for restriction for immigration of Muslims, that really struck a chord."

Ms Hanson lost her federal seat in 1998 and was jailed for electoral fraud in 2003 before the conviction was overturned.

She said she was "extremely close" to quitting politics after her stint in jail.

"I remember coming out of prison saying I'd have rocks in my head to actually go back and do it again," she said.

Senator O'Sullivan is already foreshadowing a rethink on immigration policy in the wake of Ms Hanson's successful campaign. "We might have to lift the filters on profile trends of people that come from particular sources, that could be Switzerland, it could be Iceland, who just are clearly demonstrating they are not going to fit in here entirely within Australian society," he said.

But Ms Hanson's election policies focused heavily on Muslim people. She has called for a royal commission into Islam and a complete ban on Muslim immigration.

"Let's have a look at what's happening around the world and let's ensure it doesn't happen here and people are very fearful of terrorism murders on the streets."

That said, Ms Hanson believes there are good Muslim Australians.

Ms Hanson said she was not trying to divide the country. However, on Monday she repeated her claim Australia was swamped by Asians.

"You go and ask a lot of people in Sydney in Hurstville or those other suburbs," she said.

"Unfortunately we have been swamped by Asians."