Dec 10, 2013 By Henrik Palmgren | redice.tv
We’re grieved by the sad news that writer and researcher Lloyd Anthony Pye passed away yesterday, December 9, 2013, after a battle with cancer. He was best known for his work with The Starchild Project. 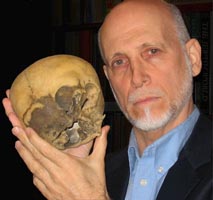 Lloyd was a frequent welcome guest to Red Ice Radio, and we enjoyed the opportunity to speak with him about his work and his writing over the years. Most recently we had a chance to sit down with Lloyd and discuss anomalous ancient skulls:

Lloyd was a popular personality, and described by researcher and author Loren Coleman as "a gentle and friendly man", a "sincere, cordial gentleman, committed to his findings and theories."

Lloyd was always a lot of fun to have on the program. He had a great sense of humor and liked to interject a good joke in his presentation, yet he was a dedicated researcher who worked hard and was determined when it came to offer a "third alternative" in the stagnating "God’s creation vs. Darwinian evolution" debate.

We urge listeners, readers, researchers and friends to take the opportunity to learn more about Lloyd’s work, discover more about the subjects that Lloyd remained passionate about, and continue his quest to challenge "currently accepted paradigms and dogmas of the mainstream".

These Red Ice Radio interviews with Lloyd Pye are now available for everyone:

Lloyd Pye is a researcher and author known for his work with the Starchild Skull and Intervention Theory. Lloyd began writing in 1975, then became a screenwriter in Hollywood in the 1980s. In 1995, he found his passion writing nonfiction in Alternative Knowledge.

Alternative Knowledge is information rooted in mainstream science, but in areas normally kept from public discussion because they cast doubt on the currently accepted paradigms and dogmas of the mainstream.

Lloyd’s fields of expertise include Intervention Theory, the origins of life, of human life, of alien reality, of hominoid (bigfoot, yeti, etc.) reality, which makes him a dynamic platform speaker in about Alternative Knowledge.

Even when facing an aggressive form of cancer, his passion for alternative sciences led him to seek natural therapies and alternative approaches to cancer treatment, and he shared his successes and setbacks with everyone on Facebook.

From Lloyd Pye’s Facebook page, which has been routinely updated by his family:

Lloyd Pye passed away at approximately 6:15 PM CT USA. Lloyd was surrounded by family and died in his mother’s arms. The family is asking for privacy at this time as we deal with the loss. We will post additional information in the near future. Thank you to all of his friends and fans for your support, prayers and love. He loved you all deeply.

We have had requests for a way to send cards and letters to the family. Cards and letters can be sent to Lloyd’s family care of Bryan S. Stone, PO Box 1413, Destin, FL 32540.

Our sincerest sympathies to the family.

Thank you for all your hard work Lloyd. You’ll be greatly missed.