For several years now there has been a dramatic loss of bees in Europe and North America. As many as 50% to 90% of the bee populations have simply vanished. This is a big deal.
Bees are a keystone species – they are vital to the food chain on our planet. An
international study of 115 food crops grown in over 200 countries showed that 75% of crops are pollinated by animals, especially by bees.

At first it was believed that only honeybees were affected, but then bumblebee populations began to decline. The crisis was eventually given a name: Colony Collapse Disorder or CCD.

CCD is Not a Disease

There were initially several theories about the cause of CCDE, including Varroa mites, cell phone radiation and a virus similar to AIDS. However, it has now been proven that the bee deaths are actually the result of poisoning from two known pesticides called clothianidin and imidacloprid –manufactured by Bayer.

The trade name for clothianidin is Poncho. The trade names for imidacloprid include Gaucho, Admire, Advantage, Merit, Amigo, Premise, Prothor, and Winner.

Why are They Used? 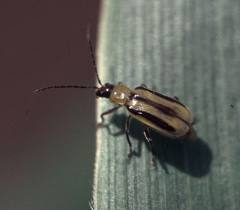 One of our most important crops is corn. But corn has an enemy called diabrotica vergifera vergifera – also known as the “root worm.” [right] It burrows into the roots of the corn plant and causes the plant to wither and eventually die.
Major infestations can wipe-out entire crops.

As bad as it sounds, the root worm problem can actually be addressed quite easily with the practice of crop rotation. The larvae must feed on corn roots to survive and cannot travel more than 10 to 20 inches if hatched in a field rotated out of corn. However, rotating a field out of corn can result in lower farm profitability if there is less demand for the alternate crop. So in 2003, Bayer Pharmaceutical introduced two pesticides, classified as neonicotinoids, to combat root worms and capitalize on increased farm profits. These pesticides are now two of Bayer’s top agricultural products – even though profits are at the expense of a keystone species.

Corn seed is coated with Bayer’s pesticides by means of an adhesive developed by another industry giant: Monsanto. Despite studies which showed these pesticides are highly toxic to bees, their use was justified with the reasoning that the corn seed to which they were applied would be buried in the soil where it would presumably be harmless to other creatures. This was a grave mistake.

The first clue that Colony Collapse Disorder was the result of poisoning, similar to the DDT bird kill-off decades ago, was when clothianidin was used on corn crops in Germany’s state of Baden-Wurttemberg. In July of 2007, the German crop was infested with root worms.
The German government ordered that every possible method should be used to eradicate this pest, including the use of neonicotinoids. Shortly after the seeds were planted, in May of 2008, some 330-million bees abruptly died. The global phenomenon has continued to this day, resulting in millions of dead colonies… billions of dead bees.

An investigation revealed that the seed coating did not stay in the soil but was introduced to the air (and the rest of the plant) by simple abrasion – the rubbing together of seeds – as they are stored, moved and planted. The German government quickly banned this pesticide, gave compensation to the farmers and issued a strong warning against using this chemical in agriculture. According to the German Federal Agriculture Institute, “It can unequivocally be concluded that poisoning of the bees is due to the rub-off of the pesticide ingredient clothianidin from corn seeds.”

According to the German Research Center for Cultivated Plants, 29 out of 30 dead bees had been killed, in the 2008 study, by direct contact with clothianidin. Philipp Mimkes, spokesman for the German-based Coalition Against Bayer Dangers, said: “We have been pointing out the risks of neonicotinoids for almost 10 years now. This proves without a doubt that the chemicals can come into contact with bees and kill them. These pesticides shouldn’t be on the market.”

According to the U.S. Environmental Protection Agency (May 30, 2003): “Clothianidin has the potential for toxic chronic exposure to honey bees, as well as other non-target pollinators, through the translocation of clothianidin residue in nectar and pollen.” 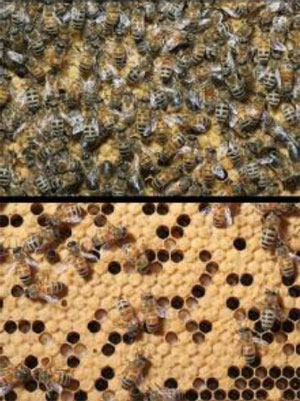 [In the same report] “The fate and disposition of clothianidin in the environment suggest a compound that is asystemic insecticide that is persistent and mobile, stable to hydrolysis, and has potential to leach to ground water, as well as runoff to surface waters.”

“Clothianidin is highly toxic to honey bees on an acute contact basis (killing 50% of tested populations at greater than 389 mg/kg). It has the potential for toxic chronic exposure to honey bees, as well as other non-target pollinators, through the translocation of clothianidin residues in nectar and pollen. In honey bees, the effects of this toxic chronic exposure may include lethal and/or sub-lethal effects in the larvae and reproductive effects in the queen.”

Bees can be exposed in two primary ways: through nectar from plants and through high-fructose corn syrup beekeepers use to feed their bees. Since most U.S.-grown corn has been treated with imidacloprid, it’s also found in corn syrup.

The tragedy in Germany and France showed that bees exposed to clothianidin also infected bee colonies that were not harvesting corn pollen, thus spreading the toxin to regions some distance from cultivating corn plants. It is believed that affected bees could have become disoriented and mingled with bees from other colonies or contaminated the pollen of plants where other bee colonies were also pollinating.

There is also evidence that imidacloprid can produce colony collapse at levels far below those used in agriculture. In the summer of 2010, researchers conducted an in situ study in Worcester County, Massachusetts aimed at replicating how imidacloprid may have caused the CCD outbreak. Over a 23-week period, they monitored bees in four different bee yards; each yard had four hives treated with different levels of imidacloprid and one control hive.
After 12 weeks of imidacloprid dosing, all the bees were alive. But after 23 weeks, 15 out of 16 of the imidacloprid-treated hives – 94% had died. Those exposed to the highest levels of the pesticide died first.

The characteristics of the dead hives were consistent with CCD; the hives were empty except for food stores, some pollen, and young bees, with few dead bees nearby. When other conditions cause hive collapse, such as disease or pests, many dead bees are typically found inside and outside the affected hives. Strikingly, it took only low levels of imidacloprid to cause hive collapse – less than what is typically used in crops or in areas where bees forage.

The tobacco industry once touted that smoking a few cigarettes doesn’t give a person lung cancer, which is arguably true. Though today, nobody is fooled by this kind of double-speak regarding tobacco. Likewise, Bayer is quick to claim that feeding bees a specific amount of neonicotinoids, doesn’t kill the bees. This is more double-speak.

While trace amounts of neonicotinoids may not kill bees outright, they do interfere with the ability of bees to navigate to and from the hive. This is exactly what beekeepers and farmers have been reporting: half empty or abandoned hives with no dead bodies to be found anywhere. It has also been noted that the empty colonies are absent the usual parasitic bugs that typically take advantage of an abandoned hive. The colonies appear sterile. The pollen that they do manage to bring back to the hive is then further concentrated and exposed to the entire colony, causing suppression of their immune systems and subsequent infection by any number of parasites and pathogens. 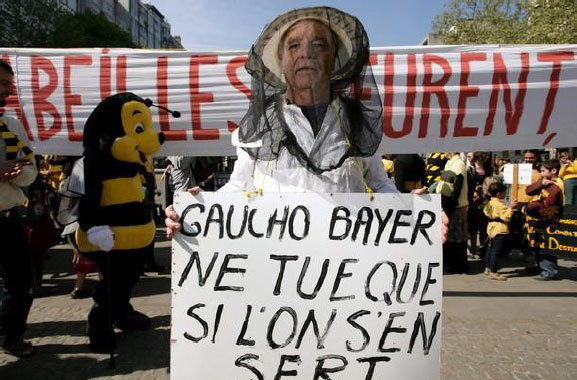 People demonstrate against Bayer pesticides on behalf of bees – April 21st, 2007 at the Bayer headquarters in Brussels. Billions of bees have died each year since Bayer introduced Gaucho and Poncho pesticides to the market. The poster reads: ’Gaucho Bayer, only kills if one uses it.’

What Has Bayer Done About It?

According to the Bayer website, they addressed the issue at Baden-Wurttemberg by holding “intensive discussions within the seed industry to develop measures for maintaining and monitoring the quality of seed coatings.” Then their “second major step” was the “technical optimization of pneumatic sewing machines.” Seriously?!? Yes. In other words: they have given the problem thorough lip service without addressing the real problem: their pesticides. They even claim to help bees with other products…

As Bayer continues propagating the conspiracy theory that Varroa mites are the biggest problem facing bee hives, they have also conveniently developed a solution. Of course it is another pesticide. This one is called CheckMite+ and has some serious problems of its own.

Studies conducted on beeswax queen cups contaminated with CheckMite+ at various concentrations far below the allowable limits were catastrophic. Very few queens survived the graft, and those that did hatch were underweight and had problems mating.

So why is Bayer’s subterfuge allowed to continue?

The bottom line is that neonicotinoids account for much of Bayer’s agrochemical profits since over 90% of US corn acreage is treated with them – and Bayer’s influence is very strong in both science and politics, as demonstrated by their history… 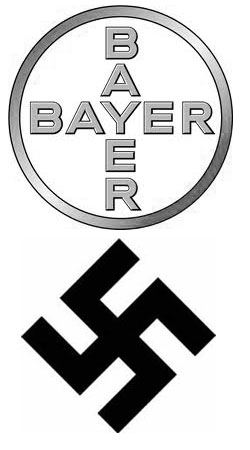 Many people think of Bayer simply as the company that makes aspirin since that is how they were founded. But they also produce many extremely toxic substances. In fact, Bayer was one of five companies that formed IG Farben in a 1925 merger. IG Farben was a huge Nazi supporter, and held the patent for the pesticide Zyklon B – which was used in Holocaust gas chambers. They also owned 42.2 percent of the company which manufactured it. Even more sickening, IG Farben used the Auschwitz facility to test its chemicals on human subjects.

In 1948, directors of IG Farben were indicted at a U.S. military tribunal, and at the subsequent Nuremberg Trials, where many were sentenced to prison for their horrible war crimes. Due to the severity of the crimes committed by IG Farben during World War II, the company was considered to be too corrupt to be allowed to continue to exist. It was officially put into liquidation in 1952, but this does not mean the company ceased to be a legal entity. It continues even today as a corporation "in liquidation", meaning that the purpose of the continuing existence of the corporation is being dissolved in an orderly fashion. Its shares are still traded on German markets.

Clearly too many powerful people stood to lose too much money if IG Farben had been liquidated immediately. The same is true of Bayer, which was obviously allowed to continue operations (along with partners BASF and Agfa). After all, it would have been a shame to waste the profits from all that research. So now the world is once again faced with a Bayer holocaust – only this time it is against the earth’s bee population.

Bayer will stop at nothing to make a profit… when will they be held accountable?