Being white, and a minority, in Georgia

One of the clearest signs of how times have changed in this little Southern town is literally a sign. It’s the outline of a faded red, oblong Dairy Queen sign that towers over Buford Highway just a few miles from the city line.

It used to direct residents to a fast food franchise, a beacon of Americana, where a hamburger cost 79 cents. The building is gone now. Only the sign remains, and at its base is a Hispanic man with a machete, slicing open coconuts piled in the back of his trailer.

His English is shaky. His coconuts cost $4.

A generation ago, this Atlanta suburb was 95 percent white and rural with one little African-American neighborhood that was known as “colored town.’’ But after a tidal wave of Hispanic and Asian immigrants who were attracted to Norcross by cheap housing and proximity to a booming job market, white people now make up less than 20 percent of the population in Norcross and surrounding neighborhoods. It’s a shift so rapid that many of the longtime residents feel utterly disconnected from the place where they raised their children.

“It’s not that much anger, but you don’t feel comfortable knowing that all this is around you,” said Billy Weathers, 79, who has lived in the area for his whole life and doesn’t speak a lick of Spanish.

Many say they feel isolated in their own hometown, pushed to change their ways, to assimilate to the new arrivals instead of the other way around. They resent the shift, even knowing it’s nobody’s fault, really. And they have mostly kept their feelings to themselves. Who, they wonder, would listen to folks like us, anyway?

But this year, in Norcross and places like it, resentment has found its voice. The concerns of a white citizenry feeling displaced have been reinforced by the rhetoric of Republican presidential nominee Donald Trump, who swept most of the state in the Republican primary. 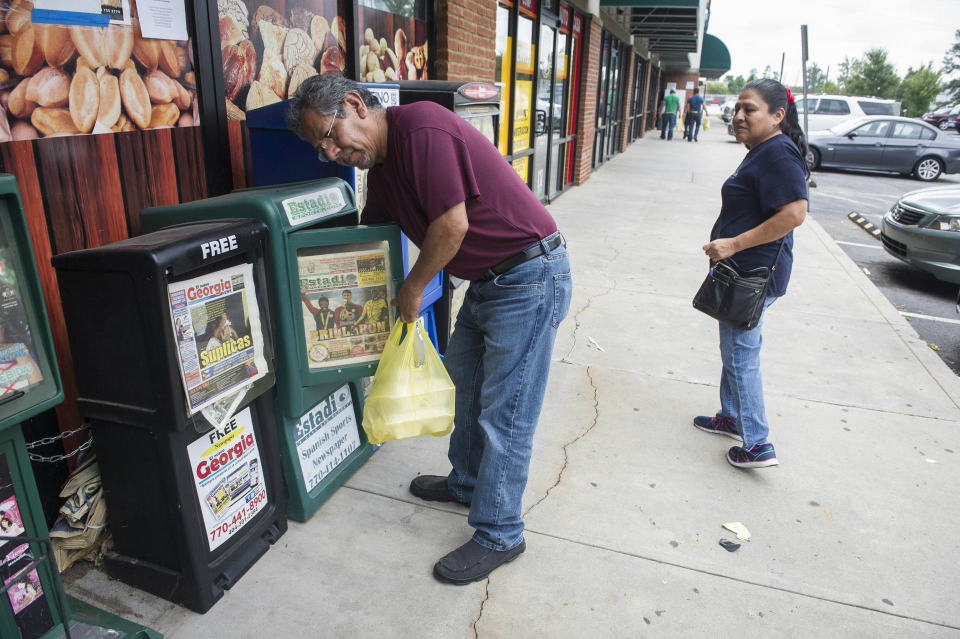 His slogan, “Make America Great Again,” appeals to people here who don’t talk much to their newer neighbors anymore, not out of malice but because they often don’t even share a common language. When Trump talks about building a wall between the United States and Mexico, these largely white, Republicans nod in agreement.

“There used to be a place where we could go out to eat to get southern cooking,” said Billy’s wife, JoAnn Weathers, 79. “Well there’s no more southerners left here. . . . They came from other countries and completely changed our lives.”

It’s an attitude that many in the elites of both parties are quick to dismiss as out-of-date, wrongheaded, and frankly kind of embarrassing. It sounds like racial prejudice, and sometimes is. But to simply ignore or belittle this sense of loss and isolation is to close your eyes and ears to nativist sentiments that predated Trump’s rise, and even if he loses, aren’t going away. The demographic tide all but guarantees it.

The number of Hispanics in Georgia nearly doubled from 2000 to 2010, bringing their total to roughly 9 percent of the state’s population. That’s still a smaller proportion than in the nation, where the Hispanic population reached a record 55 million in 2014 — 17.4 percent of the country’s overall population, according to Census data.

But in this part of Georgia, the pace of change has been breathtaking.

Here, Hispanics are concentrated in places like Norcross, a small city outside Atlanta where a hot economy led to abundant jobs in building, hotel, and landscaping industries.

Those jobs attracted job-seekers of all ethnicities. And to accommodate all this growth, Greater Atlanta needed to build. The metro area led the country in building permits issued each year from 1994 and 2005, according to data from the Atlanta Regional Commission.