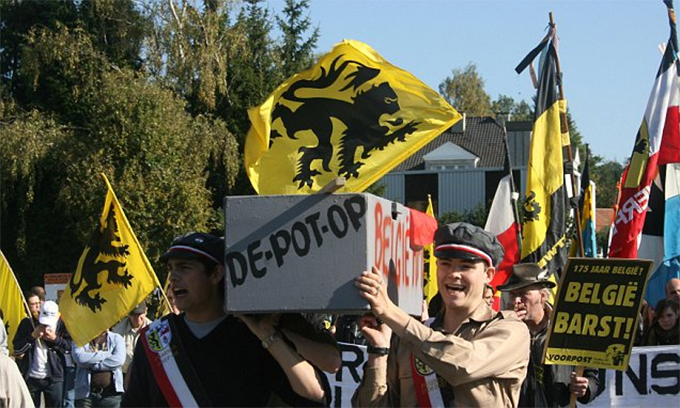 'White Power' rising: Extreme right-wing group Voorpost, seen carrying a symbolic coffin of Belgium during a demonstration in 2007, say they have seen a surge in support in the wake of the Brussels terrorist attacks

Belgium has turned on immigrants in the wake of the Brussels terror attack as far-right skinhead groups are experiencing a surge in popularity, promising ‘drastic action’ in the aftermath of the atrocities.

Voorpost, a Belgian White Power organisation that is being closely monitored by security services, says its membership has rocketed following the carnage.

‘A huge number of people have started supporting us online. We have had more than double the number of new members in the last three days,’ Bart Vanpachtenbeke, the leader of the organisation, told MailOnline.

‘There is anger in Brussels now. I think there are dark times coming. We can’t give any information, but we are planning a lot of new protests. There is a lot of drastic action, a lot of noise coming.’

Security services believe there is a real risk of violence coming from the nationalist gang.

‘Intelligence agencies are concerned about Voorpost’s capacity for violent action,’ said Vidhya Ramalingham, fellow at the German Institute on Radicalisation and De-radicalisation Studies.

‘They are carefully monitoring members of the organisation. The numbers are far smaller than in radical Islam, but there is a serious threat.’

Some of his online posts warning of the dangers of radical Islam, he added, have been shared more than four million times.

‘For a small country, that is massive,’ he said. ‘Our support has increased by 25 per cent. People are realising that everything we have been saying was right.

‘Our government are world champions of looking away and pretending there isn’t a problem. They are cowards, and people are fed up with it.’

The official Vlaams Belang Facebook page displays many inflammatory comments from supporters, some of whom refer to Muslims as ‘monkeys’.

‘I really hope you win the next elections and send back every Muslim,’ says one. ‘It will never work to live together with that scum.’

Others wrote, ‘the government won’t do anything, you need a new Adolf for that. He would solve it in a couple of months’, and ‘sadly the Hitler Youth doesn’t exist any more.’

Mr Van Grieken believes that the attacks were ‘symptoms’ of a deeper malaise.

‘We are the only party that highlights the dangers of radical Islam and the existence of parallel societies in our main cities,’ he said. ‘People are furious with the elites in this country.’

Belgium has so far not experienced the same unrest between local people and migrants that has been seen in Germany, Finland and elsewhere in Europe.

But frustration is mounting, and it is directed at the ruling classes as well as the Muslim community.

March: TThe official Vlaams Belang Facebook page displays many inflammatory comments from supporters, some of whom refer to Muslims as ‘monkeys’

Dangerous trend: Vlaams Belang's Tom Van Grieken told MailOnline that some of his online posts warning of the 'dangers of radical Islam' have been shared more than four million times

The country's bungling Interior Minister, Jan Jambon, and Justice Minister, Koen Geens, offered to resign over ‘mistakes’ in investigations into the terror cell, only for their resignations to be rejected.

Both men remain in their jobs, sparking public outrage.

The last sign of far-Right agitation came in September, when Voorpost skinheads chained themselves to the railings of the Sijsele migrant camp and unveiled anti-migrant banners outside Red Cross refugee centres.

‘People are waking up as there are more attacks. People are starting to feel that Muslims are winning the war in Europe and it is a risky situation,’ Voorpost’s leader, Mr Vanpachtenbeke, said.

‘We tried to protest in Brussels but we were banned. Any criticism of the Belgian government is smashed down, and that is just making people angrier.’

The revelations that the far-Right group is planning more drastic action is fuelling fears that the Brussels attacks were a ‘game changer’, creating a new climate of fear and suspicion.