The entire Christian calendar is based on a miscalculation, the Pope has declared, as he claims in a new book that Jesus was born several years earlier than commonly believed.

The ’mistake’ was made by a sixth century monk known as Dionysius Exiguus or in English Dennis the Small, the 85-year-old pontiff claims in the book ’Jesus of Nazareth: The Infancy Narratives’, published on Wednesday.

"The calculation of the beginning of our calendar – based on the birth of Jesus – was made by Dionysius Exiguus, who made a mistake in his calculations by several years," the Pope writes in the book, which went on sale around the world with an initial print run of a million copies.

"The actual date of Jesus’s birth was several years before."

The assertion that the Christian calendar is based on a false premise is not new – many historians believe that Christ was born sometime between 7BC and 2BC.

But the fact that doubts over one of the keystones of Christian tradition have been raised by the leader of the world’s one billion Catholics is striking. 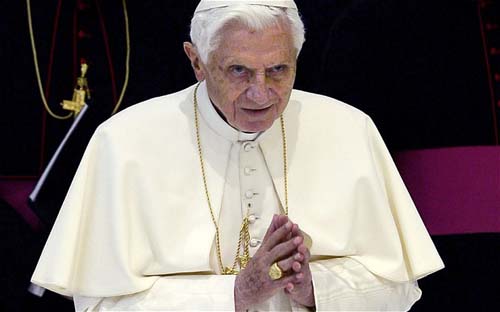 Dennis the Small, who was born in Eastern Europe, is credited with being the "inventor" of the modern calendar and the concept of the Anno Domini era.

He drew up the new system in part to distance it from the calendar in use at the time, which was based on the years since the reign of the Roman emperor Diocletian.

The emperor had persecuted Christians, so there was good reason to expunge him from the new dating system in favour of one inspired by the birth of Christ.

The monk’s calendar became widely accepted in Europe after it was adopted by the Venerable Bede, the historian-monk, to date the events that he recounted in his Ecclesiastical History of the English People, which he completed in AD 731.

But exactly how Dennis calculated the year of Christ’s birth is not clear and the Pope’s claim that he made a mistake is a view shared by many scholars.

The Bible does not specify a date for the birth of Christ. The monk instead appears to have based his calculations on vague references to Jesus’s age at the start of his ministry and the fact that he was baptised in the reign of the emperor Tiberius.

Christ’s birth date is not the only controversy raised by the Pope in his new book – he also said that contrary to the traditional Nativity scene, there were no oxen, donkeys or other animals at Jesus’s birth.

He also weighs in on the debate over Christ’s birthplace, rejecting arguments by some scholars that he was born in Nazareth rather than Bethlehem.

John Barton, Professor of the Interpretation of the Holy Scripture at Oriel College, Oxford University, said most academics agreed with the Pope that the Christian calendar was wrong and that Jesus was born several years earlier than commonly thought, probably between 6BC and 4BC.

The idea that Christ was born on Dec 25 also has no basis in historical fact. "We don’t even know which season he was born in. The whole idea of celebrating his birth during the darkest part of the year is probably linked to pagan traditions and the winter solstice."

There have been countless interpretations of the birth, life and death of Christ throughout history. One such interpreter is Bill Darlison, former Unitarian Church minister and current vice president of the General Assembly of Unitarian and Free Christian Churches in the United Kingdom. Like others before him, he asks whether Christ was actually born on Dec. 25 or whether perhaps he was born “on one of about 150 other dates which have been proposed down through the centuries. Was he born in Nazareth or in Bethlehem and, if Bethlehem, was it Bethlehem in Judea or Bethlehem in Galilee?” He also argues that the spiritual birth “is always a virgin birth, because it is not related in any sense (except symbolically) to physical birth.” In 2004, TIME asked the same question, with David Van Biema wondering if “one might be tempted to abandon the whole Nativity story as ‘unhistoric,’ mere theological backing and filling.”

The historical revisionism continues with the Pope raising the issue of the presence of animals at the birth of Christ. He reveals in Jesus of Nazareth that “there is no mention of animals in the Gospels.” This may come as a shock to the thousands of schools currently preparing their Nativity plays. But Pope Benedict reassures his readers not to worry — that “no one will give up the oxen and the donkey in their Nativity scenes,” notes the Telegraph. Even if animals did not feature at the birth, the Vatican seems happy to keep up the myth as it presents an elaborate life-size Nativity scene in St. Peter’s Square this Christmas.