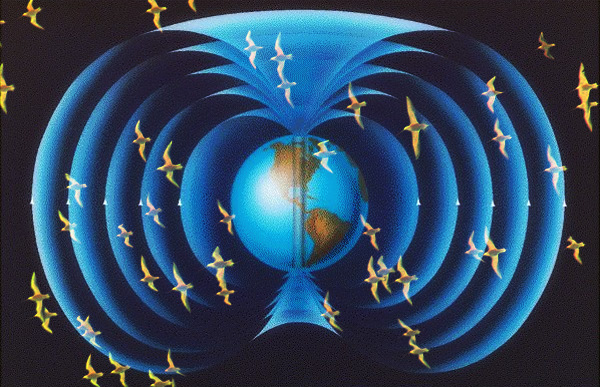 Birds may be able to ‘see’ the Earth’s electromagnetic field as they fly through the sky, scientists have suggested.

Many creatures, including all birds, navigate by sensing the direction of the magnetic forces around our planet to guide them.

But now researchers have found that different reactions are produced in the eyes of all avian creatures depending on which way the field spins.

Direction home: Birds may be able to 'see' the Earth's electromagnetic field as they fly through the sky, scientists believe

These reactions could create a picture of the field in different shades of light and dark across the bird’s eye, they have suggested.

Scientists said that if true it would be another example of Mother Nature’s wonder - in tests using the most exotic chemicals they could find, they could not match the bird’s eye for its ability to do what it does.

The complex theory involves examining the process by which light goes through a bird’s eye, which has intrigued the scientific community for more than 30 years.
In the late 1970s the physicist Klaus Schulten concluded that birds navigate by relying on geomagnetically sensitive biochemical reactions in their eyes.
Since then research has identified special cells in the eye which carry out this function using the protein cryptochrome.

When a light photon enters the bird’s eye, it comes into contact with the cryptochrome and is given an energy boost which puts it into quantum entanglement, a state where the electrons are spatially separated but still able to affect one another.

Scientists have long suggested that birds' eyes have entanglement-based compasses but now they claim in a new paper the process could produce an image of the Earth’s electromagnetic field in the eye as well.
Such an image would not be a clear outline of a shape but just shades of dark and light depending on how the field moves.

None of the experiments have provided conclusive proof, however, and more tests need to be carried out, but the prospect of such a discovery has left them stunned.

The new paper was co-written by quantum physicist Simon Benjamin of Oxford University and the National University of Singapore.

He said that how the bird’s eye works is ‘really amazing’ and was better than their attempt to recreate the process in the lab.

‘The bird, however it works, whatever it’s got in there, it’s somehow doing better than our specially designed, very beautiful molecule,’ he said.

Dr Schulten, who was not involved in the latest research added: ‘I think this is a very nice paper that attacks the problem from an interesting angle.’

British Geological Survey: Magnetic reversal may now be in progress