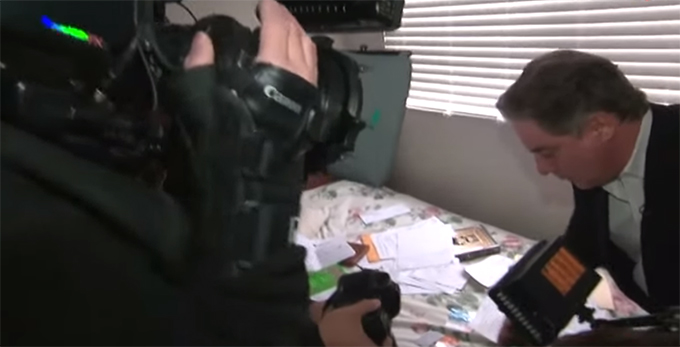 CNN Law Enforcement Analyst Harry Houck is in disbelief that a landlord was able to allow the media into the home of the San Bernardino shooters. Where was the police? They should control the crimes scene of an ongoing investigation. He's never seen anything like it before.

It's almost like there is an intentional effort to destroy evidence and disrupt a crime scene.

Information has also come out that Tashfeen Malik pledged allegiance to Islamic State on Facebook while the attackers' family lawyer says that "it doesn't make sense."

However, according to investigators, Farook had been in contact with extremists domestically and abroad over several years and his father said that he was "very religious."

Here is from CNN.com:

"This is unbelievable," said Doyle Miller, moments after entering the apartment he owns and rented out to the couple behind this week's San Bernardino massacre. "Unbelievable."

Miller was referring to the mess inside the two-floor Redlands, California, townhouse, where Syed Rizwan Farook lived with his wife Tashfeen Malik, their 6-month-old daughter and his mother.

But he could just as well have been talking about the mob of reporters who crowded its rooms, hallways and stairway on Friday, jostling each other for position.

Like them, Miller was seeing the inside for the first time since Wednesday's mass shooting at a San Bernardino regional center left 14 dead and 21 wounded -- a nightmare that ended when police shot and killed the married couple after first spotting them in a rented black SUV near the Redlands residence.

"Most of the stuff that's in here is probably caused by the FBI and the police department," the landlord told CNN. "...I need to assess the damage. It's a lot worse than what I thought."

The apartment contained many things that you'd expect in any other apartment, from couches to clothes, from a refrigerator to drawers. There were also distinctive touches, like a clock that looks like a giant watch pinned to a wall, a tapestry with Arabic writing and a copy of the Quran.

Not to mention the suggestions that authorities had been here, from piles of items to shattered glass to boarded-up windows. The most tell-tale example may have been documents from the FBI showing lists of items taken from the home.

The scene was made all the more surreal given how, interspersed amid the clutter, was a little rocker, an ExerSaucer, a crib and other evidence that this home very recently was occupied not only by two killers, but a baby.

Some online and elsewhere shuddered at the idea of reporters prowling around a place that, by authorities' own admission, not long ago contained ammunition, pipe bombs and other evidence. CNN law enforcement analyst Harry Houck, a retired New York police detective, said he was "having chills down my spine" looking at the throngs walk around an apartment he felt was "clearly ... full of evidence."