Jan 16, 2010 Source: npr.org
Thousands of people in Africa and Asia viewed an eclipse Friday as the moon crossed the sun's path blocking everything but a narrow, blazing rim of light. 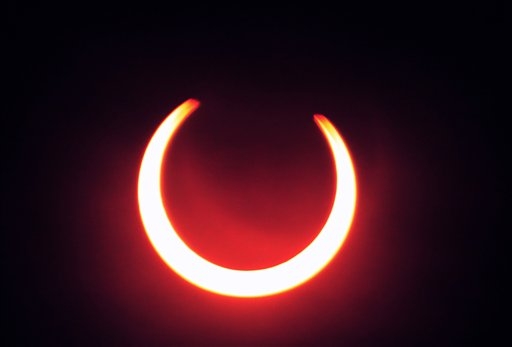 A solar eclipse is seen in Myanmar's ancient historic city of Bagan Friday, Jan. 15, 2010. Thousands of people in Africa and Asia viewed an eclipse Friday as the moon crossed the sun's path blocking everything but a narrow, blazing rim of light. (AP) 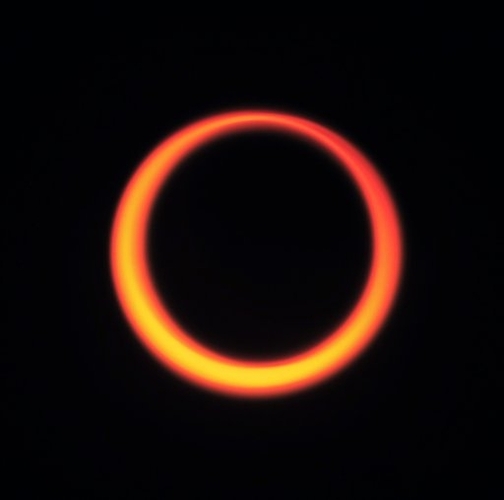 The path of the eclipse began in Africa — passing through Chad, the Democratic Republic of Congo, Uganda, Kenya and Somalia before crossing the Indian Ocean, where it reached its peak, according to the National Aeronautics and Space Administration Web site.

The path then continued into Asia where the eclipse could be seen in Maldives, southern India, parts of Sri Lanka, Myanmar and China.

Clouds obscured the partial solar eclipse in the Kenyan capital Nairobi, disappointing residents who were up early to catch a glimpse. 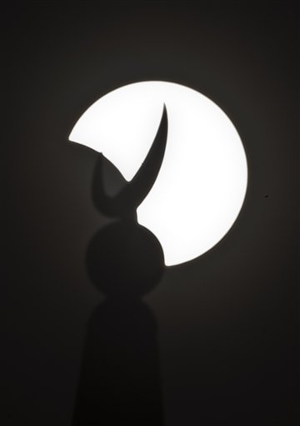 A partial solar eclipse seen before a crescent mounted on a mosque in Islamabad, Pakistan
on Friday, Jan. 15, 2010.(AP)
"I woke up very early because I wanted to see the eclipse, but I have only been able to catch just a few seconds of it because the clouds kept blocking the view. If I weren't more observant, I would've missed it," said Monica Kamau.

The eclipse is known as an annular eclipse because the moon doesn't block the sun completely.

Annular eclipses, which are considered far less important to astronomers than total eclipses of the sun, occur about 66 times a century and can only be viewed by people in the narrow band along its path.

In Uganda, locals refer to an eclipse as a war between the sun and moon.

"It is rare to see such an eclipse. I am excited to be seeing this one. It shows how powerful God is," said Damalie Nakaja, a shopkeeper in Kampala.

Friday's eclipse was visible from a 190-mile (300-kilometer) -wide path that passes through half the globe, according to the National Aeronautics and Space Administration Web site.

Hundreds gathered to view the phenomenon in southern India's Dhanushkodi, a tiny town at the tip of a rocky strip of land jutting out into the ocean, where the eclipse could be seen for about 10 minutes.

In the southern Indian city of Bangalore, hundreds went to a planetarium to see it.

"This is my first time viewing an eclipse through a pinhole camera at a planetarium and I'm very excited," said 12-year-old Aniruddh Kaushik.

But others in India were gripped by fear and refused to come outdoors. Hindu mythology states an eclipse is caused when a dragon-demon swallows the sun, while another myth says the sun's rays during an eclipse can harm unborn children.

In northern India's Haridwar town, hosting the Kumbh Mela — touted as the world's largest religious gathering — thousands of devout Hindus were expected to mark the eclipse by taking a dip in the frigid waters of the sacred Ganges river.

The eclipse could also be viewed in Indian capital New Delhi and Mumbai, the financial hub.

In Male, capital of Maldives, hundreds of people watched the eclipse with special glasses in an open field as it reached its peak.

The last total eclipse of the sun was on July 22, 2009, when it was visible in India, Nepal, Bangladesh, Bhutan, Myanmar, China and some Japanese islands.