Blood Moon: A Matter of Life and Death 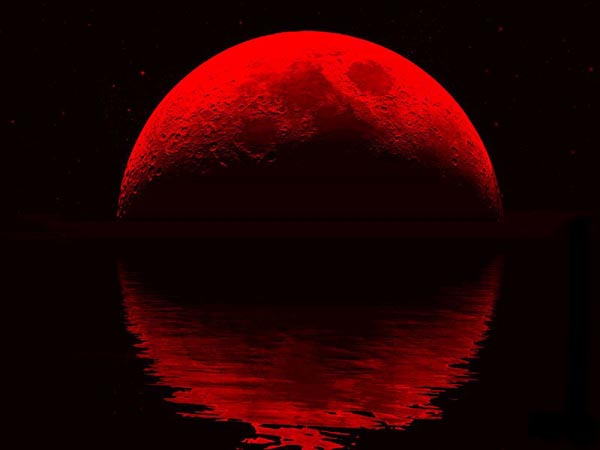 There are times when I feel sorry for the dear Christians who, having been persuaded that their literature is literal history or prophecy, when it contains stories intended for metaphorical teachings about astronomical cycles, are continually in a paradoxical state of fearing for/hoping for the End of Days and the Second Coming. This bouncing around between the extremes of hope and fear, life or death, sets up a kind of stasis, and an inability to move or think creatively, which is the basis of all cognitive dissonance.

They have been citing the Bible to speculate about the full lunar eclipse of April 15th, in which the moon will appear from the Earth to have turned a coppery/red, making it a “Blood Moon”. Joel 2:31 says: “The sun will be turned into darkness, and the moon into blood, before the great and terrible day of the Lord come.”

However, as we gradually move away from the mainstream media, realising it was lying to us, and turn to alternative media, we can be instantly presented with another trap. There’s no point in just exchanging Alastair Stewart for Alex Jones or David Dimbleby for David Icke. Because actually then, the news is much more dire, and going from dire to worse on a daily basis, thus plunging us plummeting down into a emotional death spiral far faster than anything on the BBC News ever did, which at least used to have a fluffy kitten story at the end to lift our spirits, or Nick Ross on Crimewatch reassuring about how low the crime stats really are so that we didn’t need to have nightmares. Not so the alternative media, which is relentlessly churning out, day in and day out, a grad-grinding grimoire of Hammer Horror cinema noir entrancements and enchantments about chemtrails, GMOs, fracking, Fukushima, child trafficking, human genocide, financial tyranny and the whole spectrum of criminality of the global criminocracy from bent, brainwashed coppers to the CIA running heroin to school kids while bugging our emails and our Facebook page.

It’s all this fear and alarm that keeps us in a state of stasis, helplessness. We live simultaneously in hope and dread of the End of the World – the end of that world, anyway.

But you don’t have to be a shaman or a quantum physicist to realise that what we give attention to, we become.

Another way of putting it is that energy grows where attention flows. If nothing else, the constant engagement with this Theatre of the Macabre is turning us into victims and some people never seem to recover from the trauma. I know a few who constantly tweet on Twitter about chemtrails, almost as if they have been traumatised into a compulsive personality disorder. “Chemtrails, chemtrails, CHEMTRAILS…. LOOK!!” they seem to be screaming … mainly at people who already know about chemtrails and were researching what’s behind them long before they discovered them. If you question their approach, they insist that they are “raising awareness” and they may be, to some extent. But largely, I think they’re preaching to the choir. Most of us on social media tend to be attracted to those who will reinforce our own view and support us in it, rather than towards people who will give us brand new information, especially when that information challenges our own worldview.

I have an understanding, through shamanic journeying, that everyone who is here, on this planet, right now is meant to be here right now, and even further, we have all actually chosen to be here right now. The whole huge distraction, starting with the so-called education system, has been to stop us realising who we are. So surely, I’m thinking, wouldn’t it be better to get in touch with what our Destiny really is here? Only we as individuals can find that; it’s not something that anyone else can tell us. But you know when you meet someone who’s found and is following their Destiny, because they’re flying fleet-fast like an arrow from the bow. And who can stop an arrow in mid-flight?

So instead of worrying constantly what the Oligarchy are doing, maybe we should think about what we’re doing, or meant to be doing. Because otherwise, it’s a bit like deciding to go on holiday to sub-Saharan Africa and then we get there, moaning on and on and on about the heat.

It’s not even as if moaning will make it all go away, because the Death Eaters are on a roll and they’re not going to stop now.