Sep 7, 2014 By Henrik Palmgren | redice.tv
The Bluetooth symbol is a bind-rune, which means that it is formed from two runes that are merged together. Runes are the ancient Norse letters that, according to mythology, Odin discovered and gave to gods and humans. Runes have been used for over thousand years (probably a lot longer). They were letters (used to spell things) and symbols (each symbol stood for a specific word or concept). Harald Bluetooth (circa 935-985) united Denmark under his rule; the Bluetooth technology unites different devices under its “rule.”
If you take the rune for “H”

and combine it with the rune for “B”

you get the Bluetooth logo

Bluetooth is a wireless technology standard for exchanging data over short distances (using short-wavelength UHF radio waves in the ISM band from 2.4 to 2.485 GHz[) from fixed and mobile devices, and building personal area networks (PANs). Invented by Swedish telecom company Ericsson in 1994.

The word "Bluetooth" is an anglicized version of the Scandinavian Blåtand/Blåtann, (Old Norse blátǫnn) the epithet of the tenth-century king Harald Bluetooth who united dissonant Danish tribes into a single kingdom. The idea of this name was proposed in 1997 by Jim Kardach who developed a system that would allow mobile phones to communicate with computers. At the time of this proposal he was reading Frans G. Bengtsson’s historical novel The Long Ships about Vikings and king Harald Bluetooth. The implication is that Bluetooth does the same with communications protocols, uniting them into one universal standard. 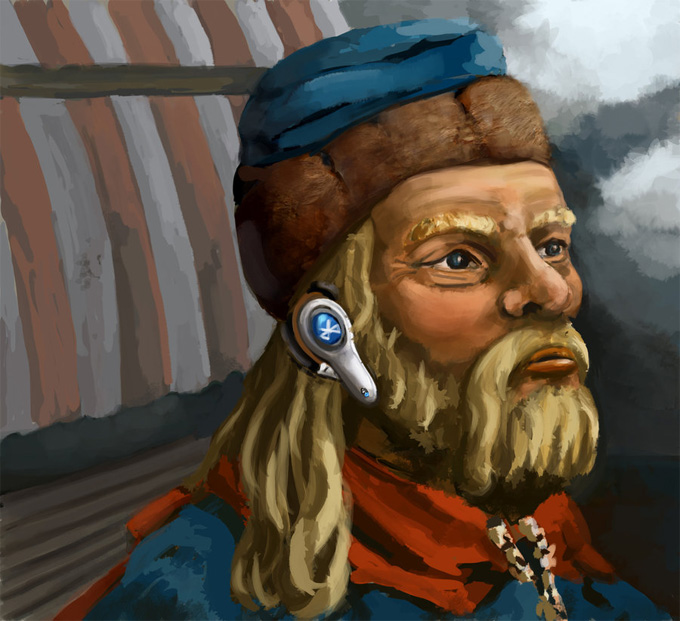