British Geological Survey: Magnetic reversal may now be in progress 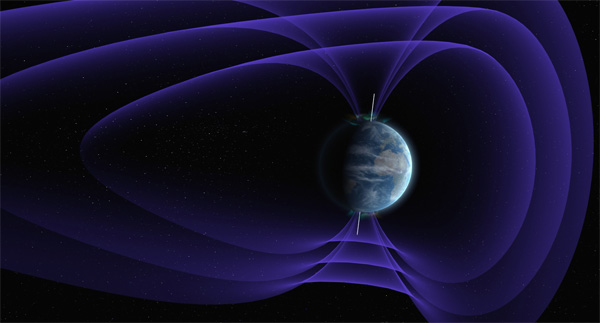 According to the British Geological Survey (BGS), we could now be headed into a magnetic reversal, thus validating the premise of both Not by Fire but by Ice and Magnetic Reversals and Evolutionary Leaps.

"We do not know in detail precisely what occurs during such reversals, including the changes observed in the magnetic field and the time a reversal takes to complete," the BGS adds.

Since so little is known, and in order to determine where radiation risks may be increased and how the atmosphere might respond, the BGS is opening a South Atlantic Anomaly and South Georgia Magnetic Observatory.

By establishing the new observatory, BGS will re-start continuous magnetic observations in South Georgia, last carried out in 1982.

What is the South Atlantic Anomaly?

"The Earth’s magnetic field, generated deep within the planet, is a shield against particle radiation from space," the BGS article continues. "In the South Atlantic this shield is much weaker than elsewhere across the globe and radiation from space therefore penetrates deeper into the atmosphere. This region is known as the South Atlantic Anomaly (SAA) and the radiation in the SAA is a known hazard to satellites, spacecraft and high-altitude aircraft."

Let me repeat that because it's so important. "The Earth's magnetic field is a shield against particle radiation from space." Our magnetic field, in other words, shields us from the radioactive particles generated by cosmic rays.

The problem, which the BGS doesn't go into here, is that magnetic field strength declines dramatically during a magnetic reversal. This reduces our shielding and allows more and more radioactivity onto our planet.

That's when the mutations begin. And that's what "Magnetic Reversals and Evolutionary Leaps" is all about.

The BGS goes on to say that Earth’s magnetic field has had many highs, lows and reversals in its past, with the last reversal taking place around 800,000 years ago. I take issue with this date because there have been many magnetic reversals since that time.

There's the Gothenburg magnetic reversal of 11,500 years ago, when the mammoths went extinct.

There's the Mono Lake magnetic reversal of 23,000 years ago, when the earth descended into catastrophic glaciation.

There's the Lake Mungo magnetic reversal of 33,500 years ago, when the Neanderthals went extinct.

And there are several others, such as the Laschamp, the Blake, Biwa I, Biwa II, Biwa III ... the list goes on. (See Magnetic Reversal Chart.)

There's even the Big Lost magnetic reversal of 640,000 years ago, when - just by coincidence? - the Yellowstone supervolcano erupted.

In fact, my research shows that our planet undergoes a magnetic reversal about every 11,500 years and, agreeing with the BGS on this point, I think the next reversal is now due.

The problem is that a magnetic reversal could be disastrous.

As I warn in "Not by Fire but by Ice": "Polarity reversals, equinoctial precession, and ice ages, all march to the same drummer. As do extinctions, new species appearance, volcanism, and rising land. Toss in the specter of massive floods, 30-story tsunami (tsunami is both singular and plural), and radioactivity falling on your head, and you've got the picture."

"The Earth is known to be able to re-generate its field and has done so during human pre-history," the BGS article continues. "Understanding the development of the SAA may therefore be significant in understanding the reversal process and its impact on life and the natural environment."

Some say the world will end in fire;
Some say in ice.
From what I’ve tasted of desire
I hold with those who favor fire.
But if it had to perish twice,
I think I know enough of hate
To say that for destruction ice
Is also great
And would suffice. 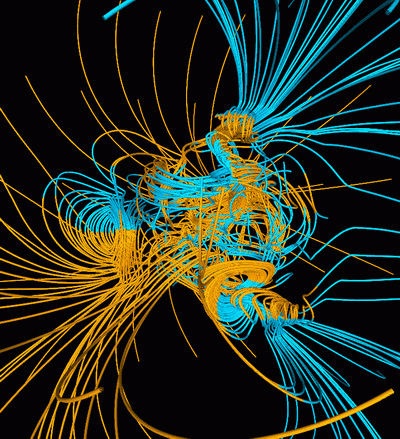 Considering the thousands of absurd claims made about the discredited fraud of “global warming”, a recent National Geographic News story, “North Magnetic Pole Moving East Due to Core Flux”, struck me as potentially far more significant.

“Earth’s north magnetic pole is racing toward Russia at almost 40 miles a year due to magnetic changes in the planet’s core, new research says.” The article by Richard A. Lovett, noted that “The core is too deep for scientists to directly detect its magnetic field, but researchers can infer the field’s movements by tracking how Earth’s magnetic field has been changing at the surface and in space.”

Most people are familiar with magnetic north because that is where compass needles actually point. It is not the same as the North Pole and, currently, magnetic north is close to Canada’s Ellesmere Island on the edge of the Arctic. The movement has been erratic since first located by scientists in 1831. In 1904, it began to shift northeastward at about nine miles per year. In 1989, it sped up a bit and is now “galloping toward Siberia.”

If I hadn’t read Robert W. Felix’s latest book, “Magnetic Reversals and Evolutionary Leaps”, I frankly would have paid little attention to the news, but I had to pause because Felix asks, “Could this movement be the beginning of the next reversal? I don’t know, but I wouldn’t rule it out.”

Why is this of interest? Because ice ages recur every 11,500 years and right now the Earth is at the end of the latest interglacial period, i.e., the interim between ice ages.

Since ice ages and magnetic reversals appear to occur together, it is entirely likely that what we’re really looking at is the next ice age and, to make matters much worse, a potential magnetic reversal.

“Among the many species of mammals now existing in Europe and Asia, all but six appeared during the past two million years, with no time to evolve,” says Felix, neatly dispatching Charles Darwin’s theory that species evolve over tens of millions of years.

At some point in the past 200,000 years Homo sapiens climbed down out of the trees, stood upright, and began their trek toward what we call civilization and civilization as we know it—the spread of agriculture and the rise of cities—is only about 5,000 years old.

The late paleontologist, Stephen Jay Gould, said, “We have not a shred of evidence for any genetic improvement since then. I suspect that the average Cro-Magnon, properly trained, could have handled computers with the best of us.”

The bad news about magnetic reversals is that they have often been accompanied by massive extinctions and, as noted, they return in a dependable, predictable cycle. “Mass extinctions,” says Felix, “have been the rule, rather than the exception, for the 3.5 million years that life has existed on this planet.”

Many scientists maintain that the last magnetic reversal occurred about 780,000 years ago at the Brunhes/Matuyama boundary, but in addition to full-scale reversals, Felix includes magnetic “excursions” in his calculations.

The last one, the Gothenburg magnetic excursion, took place about 11,500 years ago. Is it just a coincidence that some 40 percent of the large animal species, including the sabre-toothed cat, the mammoth, the mastodon, and the great Dire wolf went extinct at the time? “No,” says Felix. “That was no coincidence.”

Nor is it a coincidence that more than one million huge elliptical holes - some the size of a small city - were blasted into the earth at the same time. Today, those huge holes are sometimes known as Carolina Bays, Grady Ponds, Maryland Basins, or, in Texas, Salinas.

If this cycle holds true, says Felix, the next magnetic reversal——and extinction—is due any day.

Solar scientists have been watching the sun with a fair amount of trepidation lately. As Felix notes, “At the beginning of each (geological) cycle, magnetic polarity on the Sun reverses and magnetic north becomes magnetic south. No one knows why.”

We are in the Holocene cycle that began about 10,000 years ago.

Anthony Watts, a climate scientist—-one of the many that did not buy into the global warming fraud—-recently reported that “The sun has seen a resurgence of activity in December, with a number of cycle 24 sunspots being seen.” That’s good news because sunspot activity seems to correlate with warming and cooling cycles. The fewer the sunspots, the cooler the Earth becomes.

“If the past two years have taught us anything,” says Watts, “it is that the sun can be tricky and unpredictable.”

Will the next ice age begin shortly? Depends on what you mean by “shortly” because it could be tomorrow or it could be another two centuries or so. One thing is sure; the Earth’s latest interglacial period is nearing an end.

A magnetic reversal would likely have a devastating effect on planet Earth and, frankly, I don’t want to be around when it occurs.

Robert Felix is also the author of: Not by Fire but by Ice: Discover What Killed the Dinosaurs...and Why It Could Soon Kill Us