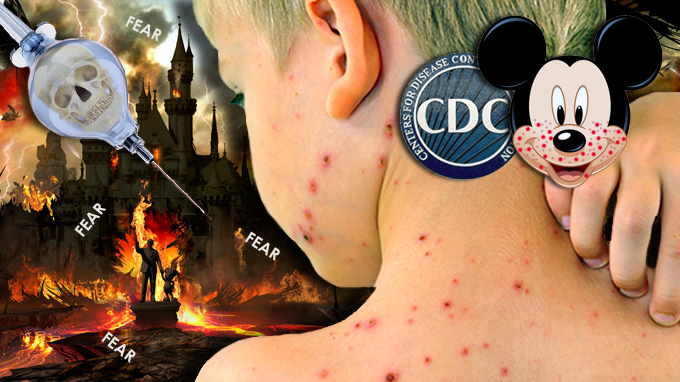 The CDC is back in the spotlight again with another one of its sensational fear campaigns. This time the plot has thickened with a connection to the beloved American national icon, Disneyland. Children across the country are cringing with the thought that the happiest place on earth is crawling with deadly germs. Concerned parents wonder how they can pull off a meaningful vacation with no Magic Kingdom. The only solution is to impose federally mandated vaccinations on all children, of course. Never mind that that the MMR vaccine has been proven to spread measles and the only measles related deaths reported in the last 10 years have been of the vaccinated.

21st Century Wire reports that there is a visible backlash happening against parents who are challenging government and corporate vaccine orthodoxy. The US media’s latest ‘mandatory vaccination’ PR campaign was successfully launched nationwide following the Disneyland ‘outbreak’.

All CDC paths lead to propaganda, fear mongering and deception. Only a few months ago, they had us shaking in our economy class seats, bracing for an Ebola pandemic. According to the official data, there should have been over a million infected individuals across the globe by January 2015. What happened there? This organization is rotten to the core, but especially at the top. They have no credibility.

Most people won’t remember CDC whistleblower Dr. William Thompson, even though he was in the news just last year. In an interview with Red Ice Radio, Jon Rappoport explained how this reputable scientist, author and high ranking executive in the vaccine division admitted to omitting vital data in a published study, breaking the protocol of the study, and covering up an association between the MMR vaccine and autism. Fortunately for Thompson, fraud at the government level holds no consequences. The journal, Pediatrics, even officially refused to retract the study and didn’t bother conducting its own investigation into the matter.

Unfortunately, a media blackout concerning this event, along with other vaccine related frauds, is controlling the narrative, and most unsuspecting parents are not even aware of the true conspiracy, which could certainly bring down the whole vaccine industry.

Listen to our interview with Brian Hooker about CDC whistleblower Dr. William Thompson for more.

Just how far is the pharmaceutical governmental network willing to go? Can we ask ourselves what truly is the underlying agenda here? Sadly, most folks do not want to compromise their comfortably numb, conforming, consuming ways by entertaining terrible thoughts that our government, and those running it, could be involved in deceiving parents and using children in the West as subjects in biomedical experiments. Perfect. The Elites have you right where they want you.

The goal of big pharma is to extract as much money as possible from you while they keep experimenting on its subjects. They want to keep their loyal customers in a state of cradle to grave dependency. This is not done by promoting health through the practice of safe, scientifically proven medicine. Certainly not holistic and natural medicine. The number of pharmaceutical related deaths and injuries due to properly prescribed medicine far surpass those resulting from any disease ‘outbreak.’ Consider what these numbers would look like if it became a crime to opt out of vaccinations.

We are expected to restructure our entire society to prevent terrorist attacks, yet nothing is being done to prevent "death by medicine" which far surpasses "death by terrorism." Yet, all imaginable resources are funneled into dealing with the latter issue. The only way around this problem is to take your health into your own hands.