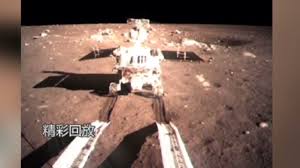 China’s first moon rover has touched the lunar surface and left deep traces on its loose soil, state media reported Sunday, several hours after the country successfully carried out the world’s first soft landing of a space probe on the moon in nearly four decades.

The 140-kilogram "Jade Rabbit" rover separated from the much larger landing vehicle early Sunday, around seven hours after the unmanned Chang’e 3 space probe touched down on a fairly flat, Earth-facing part of the moon.

State broadcaster China Central Television showed images taken from the lander’s camera of the rover and its shadow moving down a sloping ladder and touching the surface, setting off applause in the Beijing control centre. It said the lander and rover, both bearing Chinese flags, will take photos of each other Sunday evening.

Later, the six-wheeled rover will survey the moon’s geological structure and surface and look for natural resources for three months, while the lander will carry out scientific explorations at the landing site for one year.

The mission marks the next stage in an ambitious space program that aims to eventually put a Chinese astronaut on the moon. China’s space program is an enormous source of pride for the country, the third to carry out a lunar soft landing — which does not damage the craft and the equipment it carries — after the United States and the former Soviet Union. The last one was by the Soviet Union in 1976.