Mar 7, 2009 Source: swamppolitics.com
Ed Comment: Don't you think that the current Administration can get a hold of a Russian translator? This is not a mistake, it's not a joke. It's must be a message! ...or maybe they really are this incompetent? It’s difficult to know sometimes. If that is the case – it’s definitely a message from above. 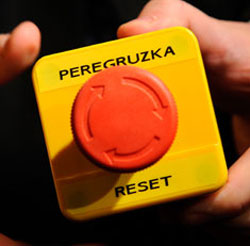 Secretary of State Hillary Clinton went for a little joke today about resetting relations with the Russians, but it turned out the joke was on her.

Clinton, presenting Russian Foreign Minister Sergei Lavrov with a gift-wrapped "reset" button, called the "little gift" symbolic of what President Barack Obama and Vice President Joe Biden have been saying about the U.S. and Russia.

""We want to reset our relationship," she said.

Yet something may have been lost in translation in the gift before closed-door talks in Geneva. The word on the button was meant to say "reset" in Russian.

"We worked hard to get the right Russian word," Clinton told Lavrov. "Do you think we got it?"

"You got it wrong," Lavrov replied - the word actually means "overcharge.''

"We won't let you do that to us," Clinton said, with the two laughing.

Growing more serious, Clinton told Lavrov: ""We mean it and we look forward to it." Lavrov, smiling, said: "Thank you very much. It's very kind of you." And on the serious side, see the National Security Network essay on the Obama administration's idea of resetting U.S.-Russian relations. 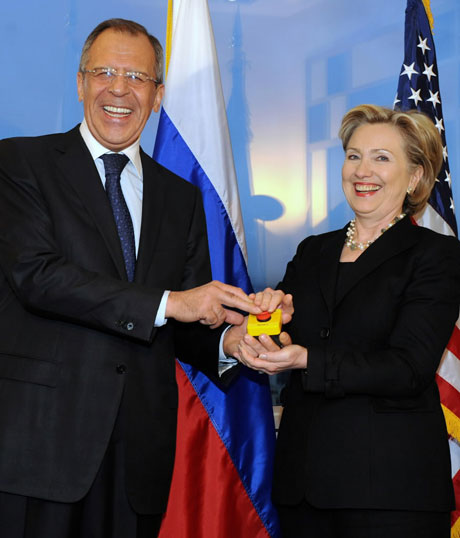