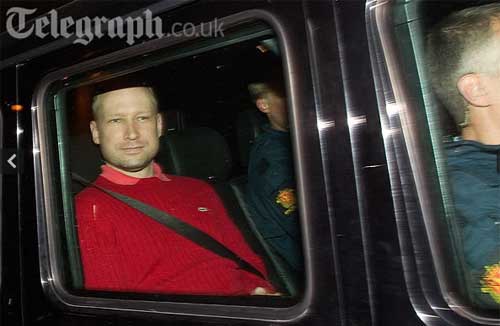 A judge denied Anders Behring Breivik the public stage he wanted to air his anti-Muslim rants and call for revolution on Monday, ruling that the first hearing for the man who has confessed to Norway’s twin terror attacks be held behind closed doors.

Breivik had prepared a speech for his day in court even before launching the attacks that left 93 people dead and Norwegians reeling at the devastation. He had requested an open hearing in which he would wear a uniform, making clear in an Internet manifesto that he planned to turn his court appearance into theatre.

He staged the bombing and youth camp rampage as "marketing" for his manifesto calling for a revolution that would rid Europe of Muslims, he said.
Reporters and locals thronged the courthouse on Monday ahead of the hearing for their first glimpse of Breivik since the assault. When one car drove through the crowd, people hit its windows and one person shouted an expletive, believing Breivik was inside.

The hearing ended after about 35 minutes. A guard at the courthouse told reporters, "everyone has left."

Peaceful, liberal Norway has been stunned by the bombing in downtown Oslo and the shooting massacre at a youth camp outside the capital, which the suspect said were intended to start a revolution to inspire Norwegians to retake their country from Muslims and other immigrants. He blames liberals for championing multiculturalism over Norway’s "indigenous" culture.

"Based on information in the case the court finds that today’s detention hearing should be held behind closed doors," Judge Kim Heger said in a statement. "It is clear that there is concrete information that a public hearing with the suspect present could quickly lead to an extraordinary and very difficult situation in terms of the investigation and security."

The court acknowledged that there was a need for transparency in the case and that it normally would consider arguments from the press when making decisions to close hearings but said that wasn’t possible "for practical reasons."

It’s unusual that the hearing was closed even before it began. Normally, a judge would make such a decision in open court.