Cyborg tissue is half living cells, half electronics

They beat like real heart cells, but the rat cardiomyocytes in a dish at Harvard University are different in one crucial way. Snaking through them are wires and transistors that spy on each cell’s electrical impulses. In future, the wires might control their behaviour too.

Versions of this souped-up, "cyborg" tissue have been created for neurons, muscle and blood vessels. They could be used to test drugsMovie Camera or as the basis for more biological versions of existing implants such as pacemakers. If signals can also be sent to the cells, cyborg tissue could be used in prosthetics or to create tiny robots.

"It allows one to effectively blur the boundary between electronic, inorganic systems and organic, biological ones," says Charles Lieber, who leads the team behind the cyborg tissue.

Artificial tissue can already be grown on three-dimensional scaffolds made of biological materials that are not electrically active. And electrical components have been added to cultured tissue before, but not integrated into its structure, so they were only able to glean information from the surface. 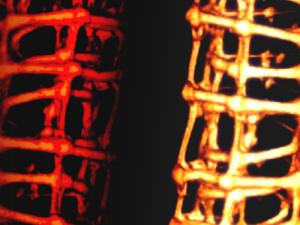 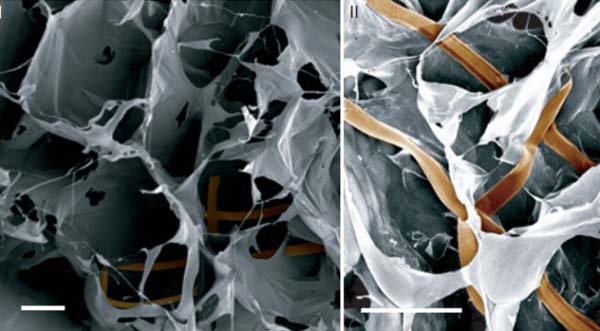 Bioengineers at Harvard University have created the first examples of cyborg tissue: Neurons, heart cells, muscle, and blood vessels that are interwoven by nanowires and transistors. Source

Lieber’s team combined these strands of work to create electrically active scaffolds. They created 3D networks of conductive nanowires studded with silicon sensors. Crucially, the wires had to be flexible and extremely small, to avoid impeding the growth of tissue. The scaffold also contained traditional biological materials such as collagen.

The researchers were able to grow rat neurons, heart cells and muscle in these hybrid meshes. In the case of the heart cells, they started to contract just like normal cells, and the researchers used the network to read out the rate of the beats.

When they added a drug that stimulates heart cell contraction, they detected an increase in the rate, indicating the tissue was behaving like normal and that the network could sense such changes.

Lieber’s team also managed to grow an entire blood vessel about 1.5 centimetres long from human cells, with wires snaking through it. By recording electrical signals from inside and outside the vessel– something that was never possible before– the team was able to detect electrical patterns that they say could give clues to inflammation, whether tissue has undergone changes that make it prone to tumour formation or suggest impending heart disease.