Daily Mail: New Observer was Right made up the story of a “mass neo-Nazi attack on refugee children” at Stockholm station

Mar 7, 2016 Source: newobserveronline.com
The Daily Mail newspaper has confirmed that the New Observer was correct in its worldwide exclusive January exposé that the Swedish Aftonbladet newspaper made up the story of a “mass neo-Nazi attack on refugee children” at Stockholm station.

In an article dealing with the Swedish establishment’s attempts to prevent Swedes from even discussing the effects of the nonwhite invasion, the Daily Mail said that despite the reports, “no migrants have told police they were assaulted at the station.”

The Daily Mail’s confirmation that the Aftonbladet made up the story was done without daring to reference the New Observer by name. Instead, they referred only to a “local newspaper” as having disputed the claims. 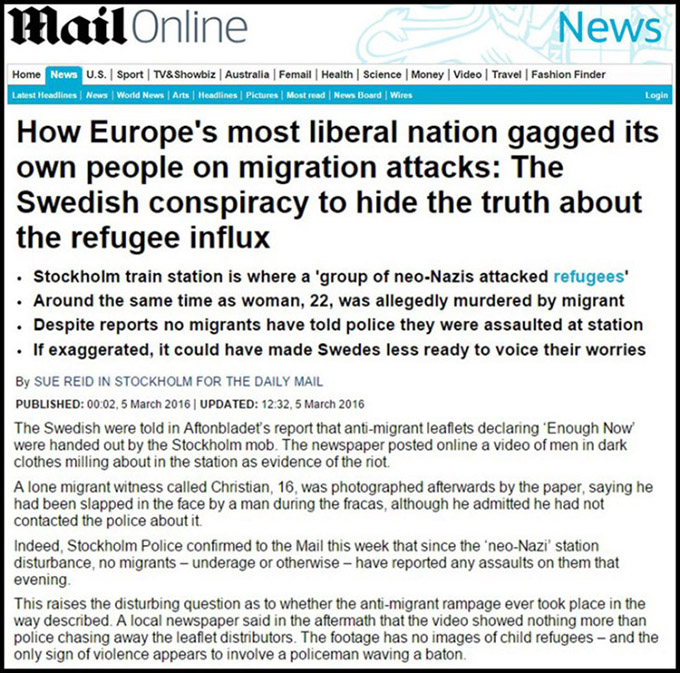 Titled “How Europe’s most liberal nation gagged its own people on migration attacks: The Swedish conspiracy to hide the truth about the refugee influx,” the paper said that the false report “could have made Swedes less ready to voice their worries” about the nonwhite invasion for fear of being categorized as “neo-Nazis.”

According to Left-wing Swedish newspaper Aftonbladet, there was a violent, unprovoked rampage by a masked mob of neo-Nazis and football hooligans who were targeting migrants, including north African street children. Aftonbladet’s reports, based on police information, made newspaper and TV headlines around the world.

The Swedish were told in Aftonbladet’s report that anti-migrant leaflets declaring ‘Enough Now’ were handed out by the Stockholm mob. The newspaper posted online a video of men in dark clothes milling about in the station as evidence of the riot.

A lone migrant witness called Christian, 16, was photographed afterwards by the paper, saying he had been slapped in the face by a man during the fracas, although he admitted he had not contacted the police about it.

Indeed, Stockholm Police confirmed to the Mail this week that since the ‘neo-Nazi’ station disturbance, no migrants — underage or otherwise — have reported any assaults on them that evening.

This raises the disturbing question as to whether the anti-migrant rampage ever took place in the way described. A local newspaper said in the aftermath that the video showed nothing more than police chasing away the leaflet distributors. The footage has no images of child refugees — and the only sign of violence appears to involve a policeman waving a baton.

For their part, the police say that a handful of the apparent protagonists were interviewed over various offences, including drunken disorder, an assault on a policeman with a bottle, and the possession of a knuckle-duster.

What is worrying is that if the Stockholm station story has been blown out of proportion, it could have artificially fuelled pro-migrant sentiment and made ordinary Swedes less ready to voice their worries about mass migration. 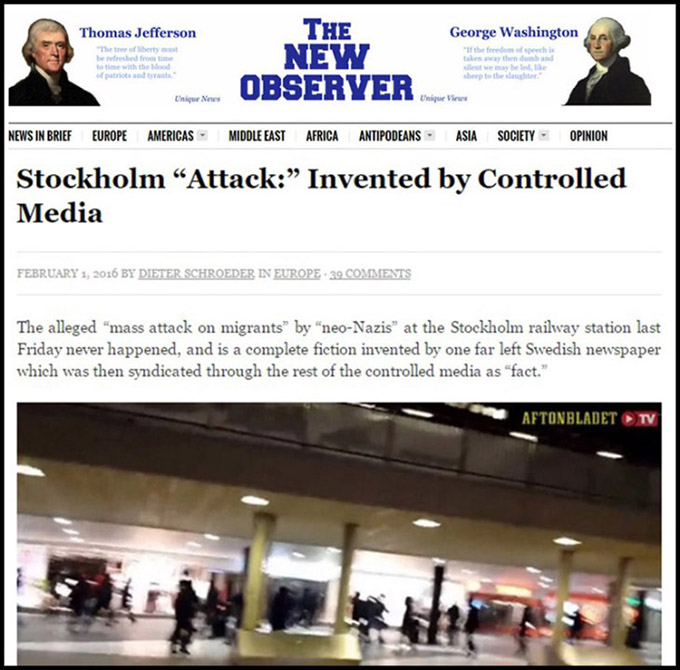 Of course, only the New Observer pointed out that the “evidence” presented by Aftonbladet consisted of an interview with one uninvolved person, and that the “horror” video which was presented as “proof” of the attack showed nothing of the sort.

The New Observer was also the only news source which reproduced the official police statement in full, which showed that there had been no reports at all of “mass attacks” by anyone, much less “hundreds of neo-nazis.”

The Daily Mail’s admission also, embarrassingly for that paper, reveals that its own coverage of the event, dated January 30, 2016, was also a pack of lies, even though it was written by its own correspondents, Sara Malm and Gianluca Mezzofiore in Sweden, as can be seen in the excerpt below: 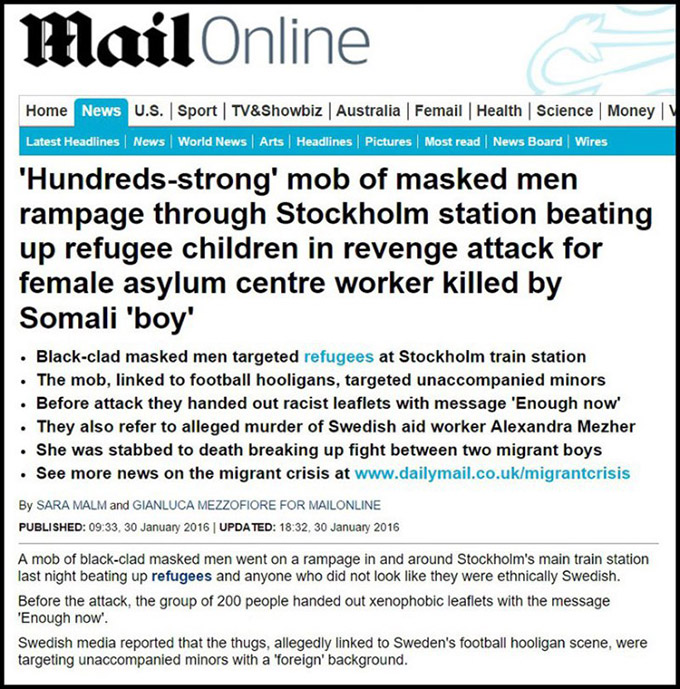 The Daily Mail’s original article not only carried the claim that a “’Hundreds-strong’ mob of masked men rampage through Stockholm station beating up refugee children,” but also carried stills from the now-exposed video with captions such as “Mob of black-clad masked men went on a rampage in and around Stockholm’s main train station targeting refugee children.” 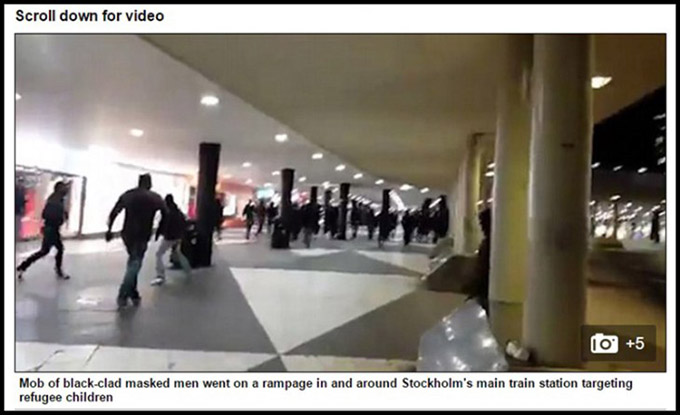 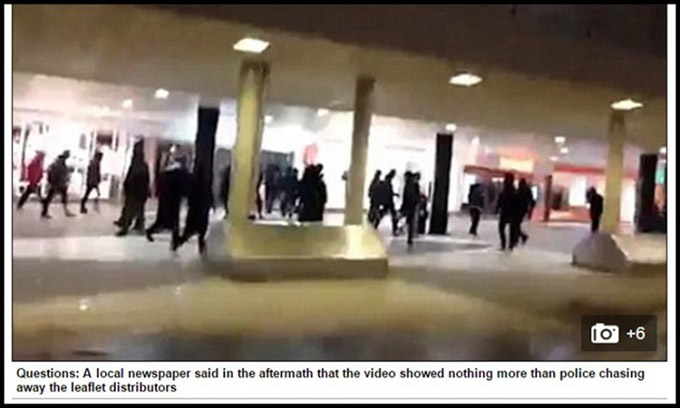 Nonetheless, the Daily Mail’s new report, admitting that the whole event never happened, is a testament to the Internet’s ability to expose the lies of the controlled media.

As the new Daily Mail article itself admitted:

Fed up with the mainstream Press (for example, the Aftonbladet newspaper has even warned that reporting offensive migrants’ behaviour is bowing to Right-wing extremism), Swedes have turned to social media and independent internet sites where they believe information is unbiased and where they have their own say. Every week they post thousands of comments on what was, until recently, the taboo topic of migration. Their comments accuse the Government of turning a blind eye as the police fight a losing battle against street crime and assaults in migrant hostels.