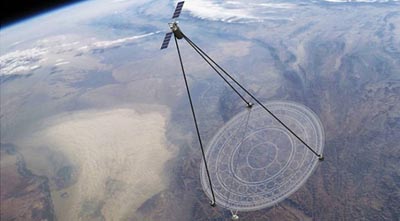 When it launches in 2018, the James Webb Space Telescope will let us see deeper into the universe than ever before. Its enormous eye is centered around 18 octagonal mirrors which assemble to form the largest telescope mirror ever built, but someday even the James Webb Telescope (formerly the Next-Gen Space Telescope) will outlive its usefulness — and then what will we do? The obvious answer is to launch an even more advanced telescope, one with an even bigger mirror that can focus on even more distant or difficult light. There’s just one problem: given the costs and practical barriers to launching objects into space, it’s very possible that in this case simply going bigger may be impossible.

That’s where DARPA comes in. The agency has always liked playing smarter — rather than harder — and has a stated goal of allowing its government to view any point on the planet, instantly and in real-time. That being the case, they needed to develop a way of launching surveillance satellites much more cheaply. DARPA has looked into everything from satellite miniaturization to Hyperloop style drone throwers, but a satellite’s mirror is the hardest part to launch in most cases. In a move sure to excite cash-strapped astronomers and terrify nervous libertarians, DARPA now says it could have a way around that problem, making high-fidelity space cameras much quicker and cheaper to launch.

View the video below for a quick artist’s rendering.

Called MOIRE, or Membrane Optical Imager for Real-Time Exploitation, the project looks to replace one of the heaviest and most troublesome elements in astronomy. Rather than using enormous mirrors or thick, dense lenses to reflect or refract the light into a collector, MOIRE uses membranes about as thick as kitchen plastic wrap to diffract light onto the satellite’s collector. MOIRE will launch in a compact state, its version of a mirror mounted on the front in the form of folded, concentric “petals” of this membrane. When the mission reaches its destination, these petals will unfold into huge sails, providing a focusing element larger than any mirror could realistically be.

There’s no word on the costs of actually manufacturing the membrane, but since its primary functional element is the etching rather than the material itself, this could bring down the costs of satellite manufacturing, as well. Independent teams are already launching small satellites; what if those small satellites could carry a membrane of a size with Hubble’s mirror? More to the point, if a team of enthusiasts could do that with a few hundred thousand dollars, what could a national space agency do with a few hundred million? What could DARPA do with several billion, or its military masters with even more?

Read the full article at: extremetech.com