Demonstration and the mathematics of invisibility cloaking (Video) 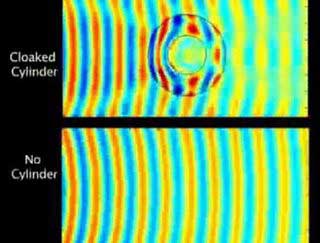 A team led by scientists at Duke University's Pratt School of Engineering has demonstrated the first working "invisibility cloak." The cloak deflects microwave beams so they flow around a "hidden" object inside with little distortion, making it appear almost as if nothing were there at all.

Cloaks that render objects essentially invisible to microwaves could have a variety of wireless communications or radar applications, according to the researchers.

The team reported its findings on Thursday, Oct. 19, in Science Express, the advance online publication of the journal Science. The research was funded by the Intelligence Community Postdoctoral Fellowship Program.

The researchers manufactured the cloak using "metamaterials" precisely arranged in a series of concentric circles that confer specific electromagnetic properties. Metamaterials are artificial composites that can be made to interact with electromagnetic waves in ways that natural materials cannot reproduce.

The cloak represents "one of the most elaborate metamaterial structures yet designed and produced," the scientists said. It also represents the most comprehensive approach to invisibility yet realized, with the potential to hide objects of any size or material property, they added.

Earlier scientific approaches to achieving "invisibility" often relied on limiting the reflection of electromagnetic waves. In other schemes, scientists attempted to create cloaks with electromagnetic properties that, in effect, cancel those of the object meant to be hidden. In the latter case, a given cloak would be suitable for hiding only objects with very specific properties.

"By incorporating complex material properties, our cloak allows a concealed volume, plus the cloak, to appear to have properties similar to free space when viewed externally," said David R. Smith, Augustine Scholar and professor of electrical and computer engineering at Duke. "The cloak reduces both an object's reflection and its shadow, either of which would enable its detection."

The team produced the cloak according to electromagnetic specifications determined by a new design theory proposed by Sir John Pendry of Imperial College London, in collaboration with the Duke scientists. The scientists reported that theoretical work in Science earlier this year.

The principles behind the cloaking design, though mathematically rigorous, can be applied in a relatively straightforward way using metamaterials, said cloak designer David Schurig, a research associate in Duke's electrical and computer engineering department.

"One first imagines a distortion in space similar to what would occur when pushing a pointed object through a piece of cloth, distorting, but not breaking, any threads," Schurig said. "In such a space, light or other electromagnetic waves would be confined to the warped 'threads' and therefore could not interact with, or 'see,' objects placed inside the resulting hole."

The researchers used a mathematical description of that concept to develop a blueprint for a cloak that mimics the properties of the imagined, warped space, he said.

"You cannot easily warp space, but you can achieve the same effect on electromagnetic fields using materials with the right response," Schurig continued. "The required materials are quite complex, but can be implemented using metamaterial technology."

While the properties of natural materials are determined by their chemistry, the properties of metamaterials depend instead on their physical structure. In the case of the new cloak, that structure consists of copper rings and wires patterned onto sheets of fiberglass composite that are traditionally used in computer circuit boards.

To simplify design and fabrication in the current study, the team set out to develop a small cloak, less than five inches across, that would provide invisibility in two dimensions, rather than three. In essence, the cloak includes strips of metamaterial fashioned into concentric two-dimensional rings, a design that allows its use with a narrow beam of microwave radiation. The precise variations in the shape of copper elements patterned onto their surfaces determine their electromagnetic properties.

The cloak design is unique among metamaterials in its circular geometry and internal structural variation, the researchers said. All other metamaterials have been based on a cubic, or gridlike, design, and most of them have electromagnetic properties that are uniform throughout.

To assess the cloak's performance, the researchers aimed a microwave beam at a cloak situated between two metal plates inside a test chamber, and used a specialized detecting apparatus to measure the electromagnetic fields that developed both inside and outside the cloak. By examining an animated representation of the data, they found that the wave fronts of the beam separate and flow around the center of the cloak.

"The waves' movement is similar to river water flowing around a smooth rock," Schurig said.

Moreover, the observed physical behavior of the cloak proved to be in "remarkable agreement" with that expected based on a simulated cloak, the researchers said.

Although the new cloak demonstrates the feasibility of the researchers' design, the findings nevertheless represent a "baby step" on the road to actual applications for invisibility, said team member Steven Cummer, a professor of electrical and computer engineering at Duke.

The researchers said they plan to work toward developing a three-dimensional cloak and further perfecting the cloaking effect.

Although the same principles applied to the new microwave cloak might ultimately lead to the production of cloaks that confer invisibility within the visible frequency range, that eventuality remains uncertain, the researchers said.

"It's not yet clear that you're going to get the invisibility that everyone thinks about with Harry Potter's cloak or the Star Trek cloaking device," Smith said.

To make an object literally vanish before a person's eyes, a cloak would have to simultaneously interact with all of the wavelengths, or colors, that make up light, he said. That technology would require much more intricate and tiny metamaterial structures, which scientists have yet to devise.

The mathematics of cloaking

The theorists who first created the mathematics that describe the behavior of the recently announced "invisibility cloak" have revealed a new analysis that may extend the current cloak's powers, enabling it to hide even actively radiating objects like a flashlight or cell phone.

Allan Greenleaf, professor of mathematics at the University of Rochester, working with colleagues around the globe, has announced a mathematical theory that predicts some strange goings on inside the cloak--and that what happens inside is crucial to the cloak's effectiveness.

In October, David R. Smith, associate professor of electrical and computer engineering at Duke University, led a team that used a circular cloaking device to successfully bend microwaves around a copper disk as if the disk were invisible. In 2003, however, Greenleaf and his colleagues had already developed the mathematics of invisibility.

"We were working on improving the mathematics behind tumor detection," says Greenleaf. "In the final section to one paper, we spelled out a worst-case scenario where a tumor could be undetectable. We then wrote a couple of additional articles describing when this could happen. At the time, we didn't think further about it because it seemed extremely unlikely that any tumor would be covered with the necessary material to be hidden that way."

This past summer, however, Greenleaf and his colleagues learned about a paper that researchers at Duke and Imperial College had published in the journal Science, which used nearly identical equations to give a theoretical proposal for a cloaking device. Once Greenleaf and his colleagues saw that their results could also be used to show how to "hide" an object, they decided to analyze and improve the proposed cloaking device, using the techniques they had developed in their earlier work. They knew that a crucial question would be: What was going on inside the cloaked region?

Smith, a physicist, gave a description of why the cloaking device should work. Greenleaf, as a mathematician, knew that to have any hope of extending and improving the cloaking, it was important to fully understand its mathematical underpinnings. Then, in October, Smith published another paper, describing how he and his team actually built a cloaking device. This made it even more crucial to carefully analyze the underlying structure.

Greenleaf and his collaborators used sophisticated mathematics to understand what must be happening inside the cloaked region. Everything seemed fine when they applied the Helmholtz equation, an equation widely used to solve problems involving the propagation of light. But when they used Maxwell's equations, which take the polarization of electromagnetic waves into account, difficulties came to light.

Maxwell's equations said that a simple copper disk like the one Smith used could be cloaked without a problem, but anything that emitted electromagnetic waves--a cell phone, a digital watch, or even a simple electric device like a flashlight--caused the behavior of the cloaking device to go seriously awry. The mathematics predicts that the size of the electromagnetic fields go to infinity at the surface of the cloaked region, possibly wrecking the invisibility.

Their analysis also revealed another surprise: a person trying to look out of the cloak would effectively be faced with a mirror in every direction. If you can imagine Harry Potter's own invisibility cloak working this way, and Harry turning on his flashlight to see, its light would shine right back at him, no matter where he pointed it.

Greenleaf's team determined that a more complicated phenomenon arises when using Maxwell's equations, leading to a "blow up" (an unexpected infinite behavior) of the electromagnetic fields. They determined that by inserting conductive linings, whose properties depend on the specific geometry of the cloak, this problem can be resolved. Alternatively, covering both the inside and outside surfaces of the cloaked region with carefully matched materials can also be used to bypass this problem.

"We should also keep in mind that, given the current technology, when we talk about invisibility, we're talking only about being invisible at just a narrow range of wavelengths," says Greenleaf. "For example, an object could be rendered invisible at just a specific wavelength of red; it would be visible in nearly every other color."

Smith's team at Duke is also working on improving their cloaking device. On Dec. 6, Smith and Greenleaf met for the first time and talked about Greenleaf's new math.

"Allan has been looking at the problem much more generally, and deriving the conditions for when true invisibility is or is not possible," says Smith. "We are very interested in what he and his colleagues come up with!"

Greenleaf and his coauthors are now working to confirm the relationship between their work and experiments. Some of the equations do not have solutions, so they are looking at what the physical consequences are, and whether a cloak's effectiveness would be compromised. Since any physical construction is only an approximation of the mathematical ideal that Greenleaf's team analyzes, Greenleaf says it would also be very interesting to understand the extent to which small errors in the construction degrade the cloaking effect.