BUNGLING Nasa chiefs are believed to have found tiny Martians — but KILLED them by boiling them alive. 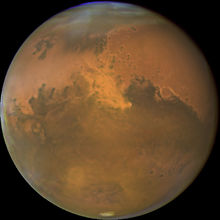 Two spacecraft that landed on the Red Planet in 1976 are now thought to have detected live microbes in Martian soil.

Scientists at the time failed to spot the signs of life — and COOKED the bugs at 160°C during experiments. Now an international team has used modern techniques to re-examine data collected by the two unmanned Viking probes.

And biologist Joseph Miller, of the University of Southern California, said: “I’m 99 per cent sure there’s life there.

During the 1976 mission, nutrients were added to the Martian soil. It would have a similar effect to putting plant food on a garden. The soil gave off a gas, believed to be mainly carbon dioxide.

Experts dismissed the possibility that the gas came from bugs. But new tests indicate it DID. Unfortunately, the soil was heated in the original tests, killing any microbes.

Dr Miller wants Nasa to send a craft back to Mars to film the minute creatures.

"Former NASA Viking Lander astrobiologist Gilbert V. Levin describes the instrument he had designed and built for the first ever search for life on another planet - Mars. Levin feels all his data points to the discovery of microorganisms in the soil of Mars and not the chemical reactions involving oxidants that his critics often cite. Most of the popular television science documentaries produced today rarely mention the biology results from the 1976 twin Viking Lander. "

NASA has found life on Mars but failed to recognise it, a controversial new scientific report claims. An international team looked again at the findings of two spacecraft that landed on the Red Planet 36 years ago.

Sensationally, they conclude that the Viking missions sent back clear evidence for bugs living in the martian soil. Two robotic Viking spacecraft became the first to land on Mars in 1976 and are the only ones to have carried experiments directly to look for life. 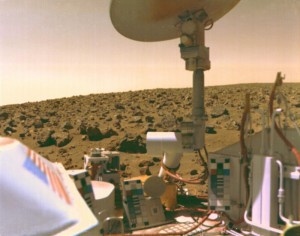 One, called the Labeled Release experiment, added nutirents to samples of martian soil, just as a gardener might add plant food to his garden. The soil quickly gave off a large amount of gas, believed to be mainly carbon dioxide. But NASA decided against a biological cause at the time.

Now a team of scientists and mathematicians have carried out a detailed analysis of the data gathered by the experiment and compared it to the results that would be obtained from bug-free soil. They conclude that their findings point to microbes having produced the gas.

Writing in the International Journal of Aeronautical and Space Sciences, the team say: “The only extraterrestrial life detection experiments ever conducted were the three which were components of the 1976 Viking Mission to Mars. Of these, only the Labeled Release experiment obtained a clearly positive response.

“In this experiment 14C radiolabeled nutrient was added to the Mars soil samples. Active soils exhibited rapid, substantial gas release. The gas was probably CO2 and, possibly, other radiocarbon-containing gases.

“We have applied complexity analysis to the Viking LR data… We conclude that the complexity pattern seen in active experiments strongly suggests biology. These analyses support the interpretation that the Viking LR experiment did detect extant microbial life on Mars.”

The team believe they saw a regular pattern, or “circadian rhythms”, in the amount of gas released with an increase during the warmer part of the martian day.

One of the team, biologist Dr Joseph Miller, of the University of Southern California’s Keck School of Medicine, told Discovery News today: “On the basis of what we’ve done so far, I’d say I’m 99 per cent sure there’s life there.”

He wants NASA to send a movie camera to Mars to get the conclusive evidence. “The ultimate proof is to take a video of a Martian bacteria. They should send a microscope and watch the bacteria move,” he said.

Speaking to the Futurity website, Dr Miller added: “To paraphrase an old saying, if it looks like a microbe and acts like a microbe, then it probably is a microbe. The presence of circadian rhythmicity and a high degree of mathematical complexity or order in the LR data most likely means Viking discovered microbial life on Mars over 35 years ago.”

One footnote: Rather embarrassingly, if Viking did find Martians, they also boiled them alive because their experiment heated the scooped soil to 160 C.

Update: Skymania has been asked why NASA cooked martian soil, but it was all part of the test that looked for organic material.

Each Viking lander has a robotic arm with a scoop that collected dirt from the surface. One teaspoonful was damped with a rich, partly radioactive nutrient that would be absorbed by any microbes in the soil. The idea was that any such bugs would release carbon into the air and this would be detectable thanks to the radiation.

To help prove that any positive result would be due to biological processes and not just a chemical reaction, other soil samples were brought to high temperatures – or cooked – to sterilise them and kill off any living organisms. This was to see whether the unheated soil behaved any differently from the heated soil.

Scientists were startled to find that the radiation level from the air in the uncooked soil rose quickly. The amount given off from the sterilised sample was much lower. On the face of it, this suggested that they had found Martian life.

But in fact the NASA experts decided the radioactivity was being given off TOO quickly for organisms to be responsible. They also found that when they added further nutrient, there was no further increase in radioactivity, so NASA ruled out a biological explanation.

One of the team that has published the new report is Dr Gil Levin, who was in charge of NASA’s Labelled Release Experiment on the Viking missions. Now in his eighties, he has always been convinced that those landers discovered a bacteria-like life form.