John Grove stood out among the dozens of fatal drug overdose victims the Georgia Bureau of Investigation examined in November 2016.

But when his toxicology test came back in January 2017, it revealed something unusual. There were no opioids in his system, nor were there cocaine or benzodiazepines, which are now responsible for the overwhelming majority of drug overdoses. Instead, Grove tested positive for a single substance: mitragynine, best known as the psychoactive ingredient of kratom, an herbal drug derived from the leaves of a Southeast Asian tree related to coffee.

And it was mitragynine that had caused Grove to collapse on the floor of his coworker’s bathroom and die, GBI concluded.

It was an odd and seemingly unprecedented determination. Scientists say there’s scant evidence that mitragynine causes fatal overdoses, and many kratom advocates claim that overdosing on the substance alone is impossible. Although authorities have come forward with reports of deaths supposedly related to kratom, all of the cases they’ve cited publicly have involved the presence of other, often more dangerous drugs, making it nearly impossible to discern kratom’s role in the fatalities.

But mitragynine was the only substance on Grove’s toxicology test. His death, listed as an “acute mitragynine intoxication,” could have provided an important window into how this drug supposedly kills humans when taken in isolation.

HuffPost took a closer look at Grove’s case and other “kratom-related deaths” in Georgia. We found that not only is the state using sloppy reporting on these deaths, likely overestimating the apparent harms of kratom, but the state also appears to be rushing to blame mitragynine for the deaths of people like Grove, even when there may be more likely culprits.

Grove was one of the first deceased individuals in Georgia to test positive for mitragynine, following GBI’s decision in November 2016 to begin routinely screening for the substance amid mounting concerns about kratom, according to records the agency provided to HuffPost.

There were four such kratom-related deaths in the state in 2016, according to GBI; and 11 more so far this year. Those figures recently led the state’s chief medical examiner to warn that kratom is killing people in Georgia.

But when HuffPost examined GBI’s data, it became clear that the agency is relying on a loose interpretation of what it means for a death to be “related” to kratom. In fact, it appears to be counting every fatal drug overdose in which mitragynine is present as a so-called kratom-related death.

Of the 15 cases GBI has documented, only four individuals tested positive for mitragynine alone. Grove was among them, though HuffPost has learned additional details which show that even in cases like his, mitragynine may not be the most probable killer.

Every other supposed kratom-related death in Georgia also involved additional substances, often including much stronger drugs like heroin, prescription drugs or other potent opioid analogs like fentanyl ― sometimes taken together.

In two of the cases GBI considers kratom-related deaths, the subjects tested positive for eight different substances, including opioids, antidepressants and other powerful prescription drugs. Due to the nature of GBI’s data collection methods, it considers these deaths to be kratom-related. 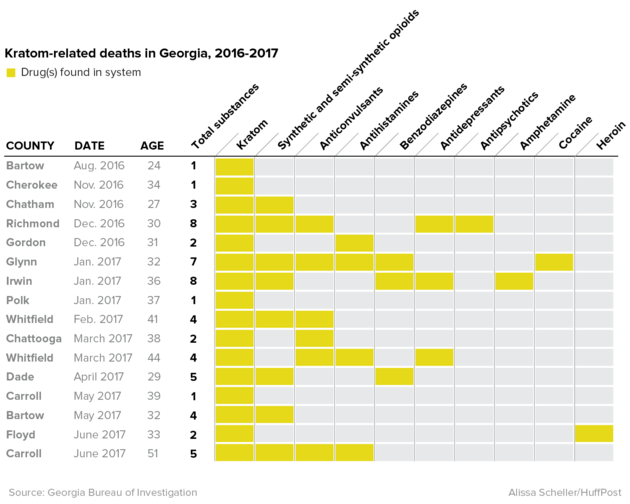 This system, which indiscriminately lumps cases into the same category despite glaring dissimilarities, says nothing about how ― or even if ― GBI determined mitragynine had actually contributed to each death.

GBI declined to comment to HuffPost about Grove’s examination, including what had led to the determination that he had died of “acute mitragynine intoxication,” as well as what such an incident actually looks like.

Using these loose reporting standards, officials in Georgia have been able to claim they have the data necessary to classify kratom as a potentially deadly drug.

But emerging science has found mitragynine to be largely benign, especially when taken in low or moderate doses. Additional research is needed to identify potential health conditions or genetic predispositions that could cause complications for kratom users. After all, if officials are genuinely interested in preventing harm related to kratom, they must first identify with certainty what that harm is.

GBI’s broad-brush treatment of kratom-related deaths does nothing to expand this understanding, and may actually obscure it by a producing a misleading narrative about mitragynine’s effects.

Kratom groups estimate that around 3 million people now use the substance in the U.S., where it’s sold over the counter as an herbal supplement and commonly taken as a powder or tea. More controversial products have also popped up in gas stations or head shops, where they may be hocked as a cheap high.

Mitragynine activates opioid receptors, but does so without triggering respiratory depression, an often lethal side effect of traditional opioids. Consumers use kratom for a variety of purposes, including as a treatment for chronic pain, anxiety and depression, as well as a replacement drug for opioid addiction.

In the face of a new drug scare, the federal government has predictably responded with promises of aggressive action to protect Americans. And it may be using Georgia’s reports on kratom-associated deaths ― or at the very least, a similarly suspect methodology ― to advance claims that the herbal supplement presents an imminent danger to public health.

The announcement signaled that the federal government was preparing to revive an effort to crack down on or ban kratom. The Drug Enforcement Administration postponed a similar push last year following intense public backlash, and is currently awaiting an official analysis from the FDA on kratom’s risk profile before deciding how to proceed. In an interview last month, Gottlieb suggested his agency had already provided the report to DEA.

The FDA has not revealed any further information about the 36 cases Gottlieb cited. It denied HuffPost’s request to immediately release the data, and has responded to other reporters’ requests by saying they couldn’t locate it. An FDA database that compiles reports of adverse drug interactions shows records of 42 kratom-related deaths since 2011. But all of the incidents on that list also involved the presence of other substances. Some of them took place abroad, and were related to a controversial adulterated kratom product that contains the opioid painkiller tramadol.

If the number the FDA is now citing includes cases from Georgia, or even other similar deaths from elsewhere, it is almost certainly exaggerated. At the very least, these questions show there must be more transparency when it comes to reporting on kratom-related deaths.

The tendency for public health officials and the media to run with these reports also suggests that there should be an independent review of the data to get a fuller understanding of what, if anything, these cases could actually say about mitragynine’s potential harms.

When cases like Grove’s have attracted local media attention, they’ve largely built on a wave of coverage portraying kratom as a new drug of concern ― and even a possible killer. Six states, as well as Washington, D.C., have already moved to ban it.

At first glance, there appears to be more to Grove’s case than simple anti-drug hysteria. His toxicology test showed extremely high levels of mitragynine, which likely indicates he took around 90 or 100 grams of kratom, or somewhere between 5 and 20 times a normal daily dose, said Jane Babin, an attorney and molecular biologist who has reviewed previous reports of kratom deaths as part of her consulting work for kratom groups.