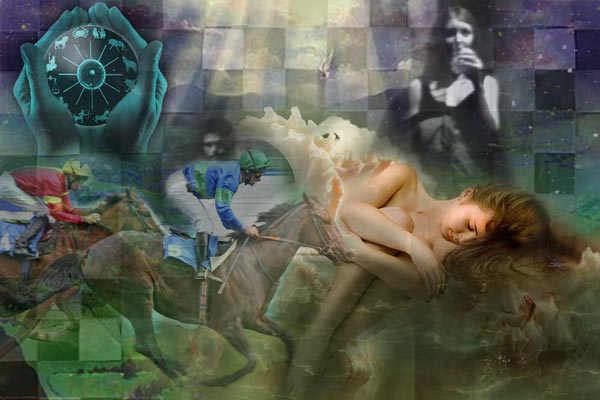 A medical psychologist and professor at the University of California at Los Angeles, Dr. Thelma Moss, director of the Neuropsychiatric Institute, undertook a study of precognitive dreams during the 1970s and found to her surprise that numerous persons periodically dreamt the winners of horse races, even when they had no interest in racing.

One of these lucky dreamers was Dr. Moss’s personal friend, Mrs. Sammie Hudson, a school psychologist. Mrs. Hudson had no interest in racing or gambling, and she rarely remembered her dreams, yet she began having vivid dreams about horse races, dreams she remembered on waking, two or three times a week over a period of four months.

In each of these colorful dreams, she heard the race announcer clearly state the winning horse name in a strong, clear voice. She told her husband and he began finding those names among the lists of horses racing each week in various parts of the nation. He bet on each of those horses and he consistently won.

“Eventually they won enough money to buy a luxury automobile,” reported Dr. Moss. “Immediately after they bought the car, her dreams of horse races stopped.” Several years later, however, Mrs. Hudson had a persistent and clear dream about winning a Las Vegas casino jackpot. She and her husband drove to Las Vegas and, yes, she won a sizable jackpot, but afterwards those dreams too, disappeared from her conscious awareness.

A second horse race dreamer was a bookkeeper, a devout Catholic, who had resisted betting on the horses that appeared in her dreams out of a religious objection to gambling. For years she had remembered dreams in which she would see a winning horse cross the finish line, and she would clearly see the winning horse’s number.

Her husband, an insurance broker, wanted to test her dreams by betting on her picks at the racetrack. One morning, apparently to appease him, “she announced that if they went to the track that day and played the daily double, they might win a thousand dollars. She had seen two races being run in a single dream, and she remembered not only the horse numbers but the odds on the daily double. They went to the track and for their two dollars they received nearly one thousand dollars, just as she had dreamed.”

A theory about personality

One of the more remarkable accounts of a racetrack dream that came true was provided to Dr. Moss by a television producer in Los Angeles.The only precognitive dream of his life involved a horse race, despite the fact that horse racing had never interested him.

In the dream two horses were in a photo finish, as described by an excited TV announcer who broadcast the name of the winner. When the producer awoke he remembered the horse’s name and realized that he had a friend who had once owned a horse by that name. The horse had been sold.
On a hunch, the producer searched a newspaper for races occurring the next day and found the horse’s name.

Dr. Moss picks up his story. “Fortunately for psychic research, the next morning he told his office staff about the dream, and they all decided to take pieces of a large bet on the horse to win. The TV producer reported that watching the race on television was one of the uncanny experiences of his life because he had already seen it in his dream. As in the dream, the announcer’s voice mounted with excitement as the race drew to a photo finish, and his horse was the winner.”

From the preceding three stories, Dr. Moss uncovered a pattern that revealed valuable information about how our personalities and professional training tend to shape the contents of precognitive messages.

“These details,” concluded Dr. Moss, “lend credence to the theory that bio-communication arrives at an unconscious level, and must rise up through the personal unconscious, receiving on the way to the surface the distortions of primary process, molded by the personality of the receiver.”