A drag queen from Belfast used last week’s Pride celebrations to shine a spotlight on the stigma still surrounding HIV.

As part of her stunning pride outfit, Electra La Cnt wore a tiara coated with HIV+ blood, in a bid to fight bigotry and encourage conversation around the subject. 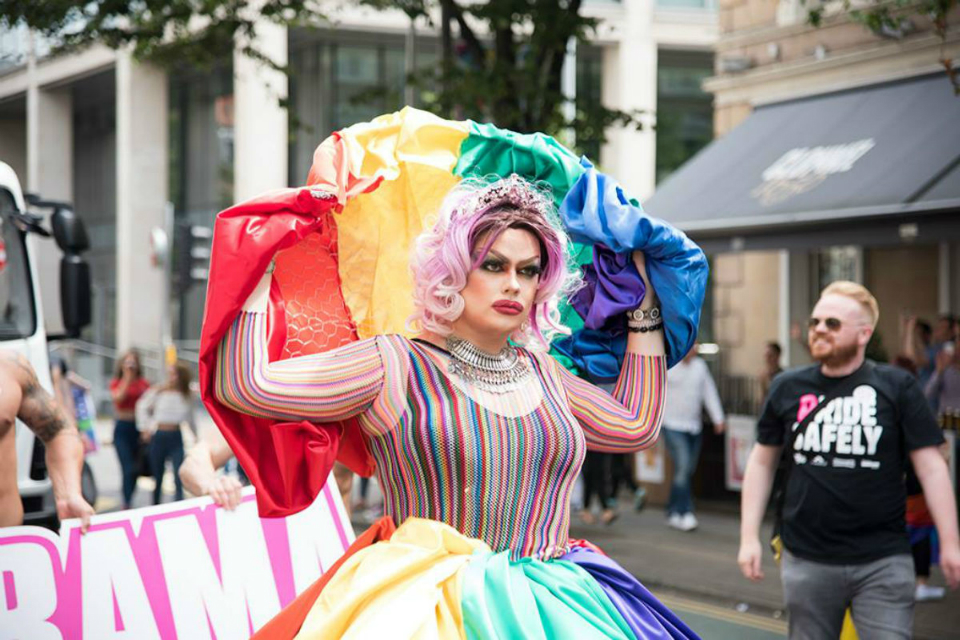 The crown was coated in the blood of a consenting HIV+ donor, taken by a qualified doctor, then applied to the crown to dry, letting the virus die with it.

“The reason I did this is because still in this day and age, even in our own community, there is a huge stigma attached to being HIV+,” La Cnt told PinkNews.

“I’ve witnessed abuse on gay dating apps that HIV+ friends of mine have had to suffer from other gay men. People are still confused over how HIV is transmitted.

“So it’s to get people talking, fight the stigma, and promote Belfast Pride’s message this year, which was ‘We Are One’.

“That includes our HIV+ brothers and sisters too: gay, lesbian, transgendered, non-binary and heterosexuals too,” she added.

La Cnt – who holds permanent residency at Boombox nightclub in Belfast – says the reaction to her outfit has so far been “brilliant”.

“It’s been well received by members of the public and social media. I can only do my bit for the fight against the stigma, and I think using my platform as a drag queen will help that. It’s what pride day really is about,” she told PinkNews.

“I can’t ask for more than to spread a message of mutual respect and understanding.”

La Cnt says she was inspired by an article from Vanguardist magazine, which saw HIV+ blood mixed with ink that was then used to print their magazine.

Writing on Facebook on the day of Belfast Pride, the popular drag queen described the process, whilst also blasting the media’s reaction to NHS England’s refusal to supply HIV-preventing drug treatments.

“We must educate ourselves more on how HIV is transmitted. I have witnessed the abuse received by HIV+ brothers and sisters in our community; and this arises from ignorance, which leads to hate, and we become divided as a result.

“There is so much we still must learn ourselves, internally, to respect one another.

“I am fully aware that heterosexual HIV+ individuals out way the number of HIV+ homosexual people in the UK now, but in light of this week’s decision regarding the NHS funding PrEP our community are once again labelled as sexual deviants amongst the media who regard it as a “gay disease”, and heterosexual HIV+ individuals as innocent victims – we are all innocent victims.

“Please do not let this dilute the power of educating yourself and others on the irrational fears surrounding HIV transmission.”