Aug 19, 2009 Source: theage.com.au
The ornate pharaonic tombs in Egypt's Valley of the Kings are doomed to disappear within 150 to 500 years if they remain open to tourists, the head of antiquities has warned. 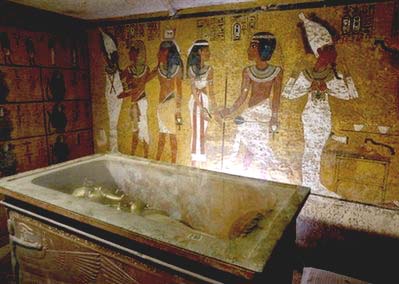 A view of King Tutenkhamun's tomb in the Valley of the Kings, close to Luxor in 2007. The ornate pharaonic tombs in Egypt's Valley of the Kings are doomed to disappear within 150 to 500 years if they remain open to tourists, the head of antiquities has warned. (AFP/File/Cris Bouroncle)
Zahi Hawass said humidity and fungus were eating into the walls of the royal tombs in the huge necropolis on the west bank of the Nile across from Luxor, which is swamped daily by several thousand tourists.

Poor ventilation and the breath of the hordes of visitors are causing damage to the carvings and painted decorations inside the tombs, he told journalists on a tour of the royal necropolis on Monday.

"The tombs [in the Valley of the Kings and nearby Valley of the Queens] which are open to visitors are facing severe damage to both colours and the engravings," Hawass said.

"The levels of humidity and fungus are increasing because of the breath of visitors and this means that the tombs could disappear between 150 and 500 years."

The Valley of the Kings and Valley of the Queens, where pharaonic royalty was mummified, is home to the tombs of legendary pharaohs such as the boy king Tutenkhamun and Queen Nefertiti.

Egypt's Supreme Council of Antiquities has taken a series of measures to protect the tombs, including setting up new ventilation systems, restricting the number of visitors and closing some tombs.

Hawass said the authorities have also decided "to close some tombs definitively to tourists and replace them by identical replicas", including those of Tutenkhamun, Nefertiti and Seti I.

"A team of experts is currently using laser technology to examine these tombs in order to build the replicas ... which would then open to visitors in a place near the Valley of the Kings," Hawass said.

King Tutenkhamun's tomb caused an international sensation when it was discovered in 1922 by Briton Howard Carter and has not ceased to fuel the imagination because of the fabulous treasures that emerged from it.

The mummy of the "boy king", who was made pharaoh at the age of nine, was found in an ornate sarcophagus his face covered by a solid gold burial mask encrusted with semi-precious stones.

The 18th-dynasty pharaoh reigned between1333 and 1324 BC and died mysteriously at the age of 19. Some experts say he was assassinated, others blame the death on a gangrenous leg.

His ancestry is also a mystery and Hawass said in June that DNA testing would be conducted to determine his parentage.

The pharaoh Akhenaten was thought to have fathered King Tutenkhamun and his mother could have been Nefertiti, a foreign princess, or his wet nurse Maya.

Nefertiti, renowned as one of history's great beauties, was the wife of Pharaoh Akhenaten, remembered for having converted his kingdom to monotheism with the worship of one sun god, Aton.

But in March German researchers in Berlin said they have uncovered a second, hidden face within an iconic bust of Nefertiti, which indicates she might not have been the flawless beauty depicted on the bust's exterior.

The bust is on display in Berlin's Altes Museum and has been at the centre of a row with Egypt, which has repeatedly demanded its restitution.

Seti I was one of ancient Egypt's greatest rulers and a formidable military commander from the 19th dynasty. His tomb in the Valley of the Kings is the largest discovered but archaeologist have yet to tap all its mysteries.

Our Interviews with Jake Kotze

Interview with Raplh Ellis on the Conscious Media Network