'Eighth wonder' Ida is not related to humans, claim scientists 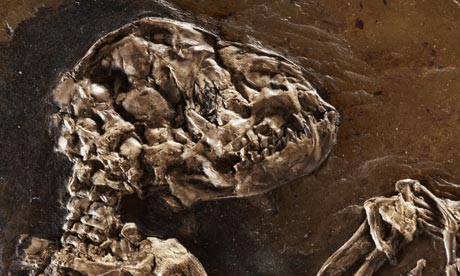 Her arrival was announced with unrestrained razzmatazz. She was the "eighth wonder of the world", "our Mona Lisa" and an evolutionary "Rosetta Stone", according to the researchers who unveiled her.

The female in question was Ida, a 47million-year-old primate, whose exquisitely preserved fossil was touted as the remains of our earliest human ancestor. She was, they said, the "link" between us and the rest of the animal kingdom.

Or maybe not. Writing in the journal, Nature, a team of palaeontologists from New York claim that Ida is not related to humans at all. Instead, they conclude, the $1m fossil looks more like a small lemur or maybe a loris.

The challenge is being seen as the opening salvo in what is shaping up to be a hearty academic slugging match. At stake is not only the significance of one of the most extraordinary fossils unearthed, but the reputations of some of the world's leading researchers. So far, relations between the two sides are strained but courteous. 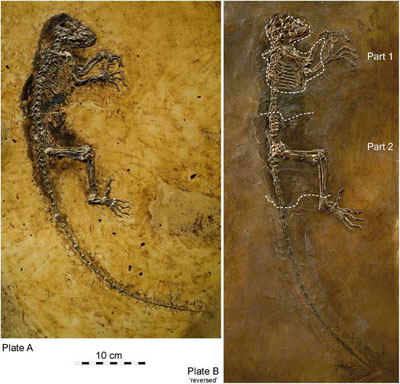 The claimed primate genus and species Darwinius masillae, said to be an ancestor of humans - a claim now in contention by scientists. Credit: PLoS One, Hurum et al.
"Our analysis and results have convinced us that Ida was not an ancestor of monkeys, apes, or humans, and if anything has more relevance for our understanding of lemur and loris origins," said Erik Seiffert, a fossil hunter at Stony Brook University in New York who led the Nature study.

Researchers behind the Ida fossil, known formally as Darwinius masillae, immediately defended their own interpretation, which is based on two years of meticulous measurements of the remains.

"We expected a challenge like this and it's interesting it has taken five months for the first attack to come," said Jørn Hurum, a palaeontologist at Oslo University's Natural History Museum. "What we claim about Ida is really quite controversial."

"Seiffert and his team claim Darwinius didn't have much anatomical detail to study because it is so crushed, but none of the authors have ever seen the original specimen. She's not that crushed, there's a lot of information in the fossil. We really trust and stand by our interpretation," Hurum said.

Hurum bought Ida for $1m after agreeing to meet a private dealer in a vodka bar in Hamburg where he was shown a series of photographs of the fossil. At the time, its exact place in evolutionary history was unclear. What Hurum did know was that Ida came from a time when the primate lineage that led to monkeys, apes and humans split from another group of animals that became lemurs and lorises. Hurum took a gamble. "It would have been quite an expensive lemur," he told the Guardian at the time.

The Ida fossil, which was found in the Messel Pit on the outskirts of Hamburg, was revealed to the public in what amounted to the greatest publicity coup in modern science. The mayor of New York, Michael Bloomberg, appeared alongside the fossil, wearing a T-shirt carrying the TV tie-in logo, "The link." A book about Ida was already coming off the presses.

Ida was an immediate media sensation. The fossil received blanket coverage around the world and newspapers hailed her as the "missing link" between humans and animals. The Guardian even gave away free wallcharts of "humanity's long lost ancestor."

The controversy erupted after Seiffert's team unearthed the fossilised remnants of a similar, but much younger primate in northern Egypt. Analysis of the 37million-year-old lemur-like fossil showed it was a close relative of Ida and had several dental features that are commonly seen in apes and humans.

Seiffert's team fed information from the new fossil and 117 living and extinct primates into a computer model to find out where the new species sat in the tree of life. Writing in Nature, Seiffert explains that while the new fossil, named Afradapis, is related to Ida, both emerged along the evolutionary path that led to lemurs and lorises. Their anatomical similarities with later primates evolved independently from those seen in monkeys, humans and apes, he explained.

"They are trying to explain all of the traits we see in Darwinius in terms of parallel evolution," said Hurum. Parallel evolution is when two groups of animals evolve similar features without being related to one another.

In an email, Philip Gingerich, a leading paleontologist at Princeton University who worked on Ida, said both fossils were almost certainly part of the lineage that led to monkeys, apes and humans. He wrote that it was "puzzling" to see Seiffert's team claim they were related to a group that became lemurs and lorises "with which it shares no resemblance".

Further work by Seiffert's team appears to add insult to injury. According to their study, neither Ida nor Afradapis have any living descendants, meaning they became extinct at the end of a sidebranch of the evolutionary tree.

"This will be part of a discussion that will run for weeks and months to come," Hurum said.