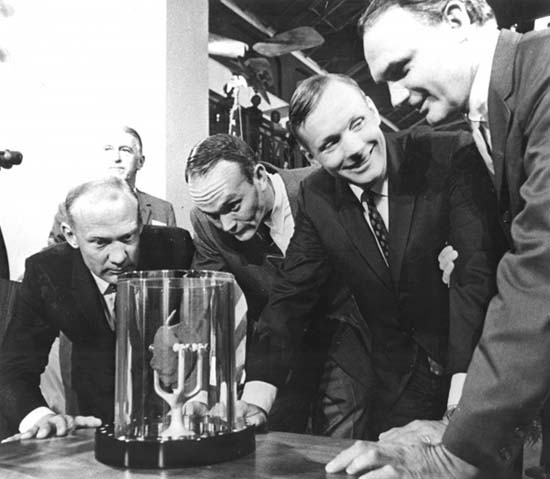 Neil Armstrong took his biggest step for all mankind, and as if to underscore the point his employer decided to share a small token of his lunar booty with nations of the planet. It was not much, at least by size, but the offering of small chunks of lunar rock to the head of every government was a symbolic gesture intended to promote goodwill.

More than 130 nations received inscribed plaques adorned with small replicas of their official flags — which had made the trip to the moon and back — along with a thumb-sized bit of black igneous rock beneath a Lucite shield. In mineralogical terms, the pebbles had no real value. But there was no beating them for rarity.

Years later, the fate of those Apollo 11 moon rocks, as well as a second goodwill offering in 1973 that followed the Apollo 17 mission, is in many cases an embarrassing mystery. Some likely are in archives and cannot easily be located. But others have disappeared with deposed dictators, aging government officials or crooked former bureaucrats. Every once in a while, one shows up in the shadowy recesses of illicit private commerce accompanied by a multimillion-dollar price tag and a no-questions proviso. 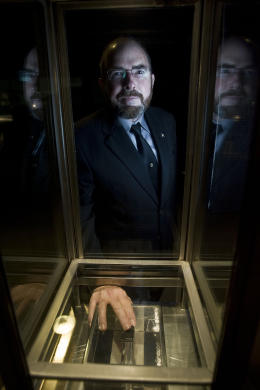 Joe Gutheinz, left, a retired investigator with NASA’s Office of Inspector General, has spent a fair portion of his adult life chasing missing moon rocks, determined to restore them to their rightful owners. The 54-year-old Gutheinz, who teaches an online class in investigative techniques for the University of Phoenix, has repeatedly used the missing rocks as an assignment for his students. They have been able to determine that 90 or so nations cannot account for the precious pebbles.

“The moon rocks are disappearing,” Gutheinz said. “Most of the ones that are now truly gone will probably be gone forever.”

It’s been a fascinating pursuit, and mostly fruitless. But every so often he managed a hit. In 1998, for instance, he set up a successful sting operation to recover the moon rock from Honduras.

A response led to a website where pictures of the plaque and rock were posted. After two months of prompting, the owner went to Miami.
“He thought we might be undercover agents from the beginning,” Gutheinz said, “but the lure of $5 million was too much.”

More recently, Gutheinz played a role in flushing out the owner of the goodwill moon rock that was intended to go to the government of Cyprus in 1973. The official presentation never happened because of the sectarian strife that wracked the island nation at the time. Rather than return the rock to NASA or the U.S. State Department for safekeeping until order was restored, an American diplomat kept it for years, then gave it to one of his children, Gutheinz said.

The world’s leading authority on space-related artifacts, Robert Pearlman, reported to NASA in 2003 that the Cyprus rock had been offered for sale.
Pearlman believes that the diplomat who originally had it probably had no ill intent in keeping it. Embassy personnel had been evacuated from the island, and he may have simply been at a loss at whom to give it to, he said. Apparently, later governments of the divided nation were not aware that such a gift had been offered.

Last September, Gutheinz made a formal request for a Congressional inquiry into the missing rock and why it had not been turned over to the government of Cyprus. He said he had two reasons for the request.

“First, to get our government to commit to recovering the moon rock, and by publicizing the inquiry place pressure on the person who had the moon rock to do the right thing and turn it over to either Cyprus or the U.S.,” he said. “Chess is one of my favorite games, and I simply positioned my chess pieces. He started to realize he needed to give it back.”

The rock’s owner, who has not been named publicly, recently told NASA that he is willing to return the goodwill plaque. Now, Gutheinz is on the trail of two other rocks, one stolen from a museum in Malta in 2004 and one that had been in the possession of the late Romanian dictator Nicolae Ceausescu.

With the help of Gutheinz, Pearlman, who operates the website www.collectspace.com, put together a list of nations and the status of their moon rocks. In an e-mail, he said that a fair number of the rocks currently unaccounted for will, in time, be located in archives or storage. Unlike Gutheinz, Pearlman is optimistic of the eventual return of many of those that were purloined.

“Unlike in the art world, for example, where there are reports of collectors content with possessing the art for their eyes only or as investment pieces, those who tend to desire space artifacts, and specifically moon rocks, are often keen to show off their prized pieces,” Pearlman said.

Although Gutheinz no longer has an official role to play in chasing down the lunar rocks, he has no plan to stop.

“We gave them away, and they weren’t taken care of like they should have been,” he said. “They belong to the people.”

Top: Photo of Moon rock at the Smithsonian (it’s still there): NASA