The revelation that Rolling Stone journalist Michael Hastings was working on a story about the CIA before his death and had contacted a Wikileaks lawyer about being under investigation by the FBI hours before his car exploded into flames has bolstered increasingly valid claims that the 33-year-old was assassinated. 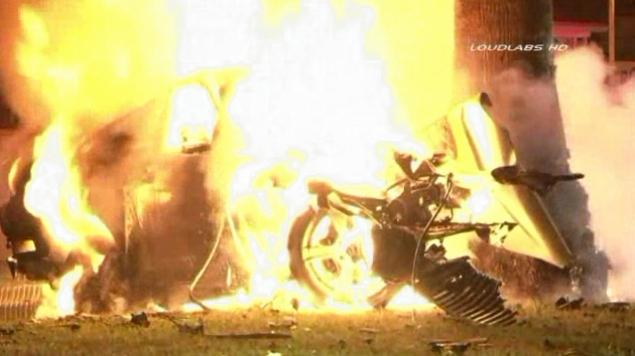 Hastings died early Tuesday morning in Hollywood when his car allegedly hit a tree at high speed. The Los Angeles Coroner’s office has not yet been able to officially identify the body as Hastings because it is so badly burned.

Skeptics of the official narrative have highlighted eyewitness accounts which state that Hastings’ Mercedes “exploded”.

Images of the vehicle appear to show more damage to the rear, around the area of the fuel tank, than the front, leading to speculation that a car bomb which ignited the fuel could have been responsible for the incident.

“No matter how you slice this particular pie, a Mercedes is not just going to explode into flames without a little assistance,” writes freelance journalist Jim Stone. “Car fires in new cars happen for three main reasons — running the engine out of oil, or running the engine out of coolant, or after an absolutely huge car mangling accident, having the hot side of the battery short out against the frame before it reaches the fuse panel. And for all 3 of those normal reasons, which account for virtually all car fires in modern cars, the fire would have started in the engine compartment, progressed slowly, and scorched the hell out of the paint before ever reaching the gas tank. That clean paint is the be all tell all, Michael Hastings was murdered, and the rest is detail.”

Stone also questions why a white sheet has been draped over the vehicle in the image below. 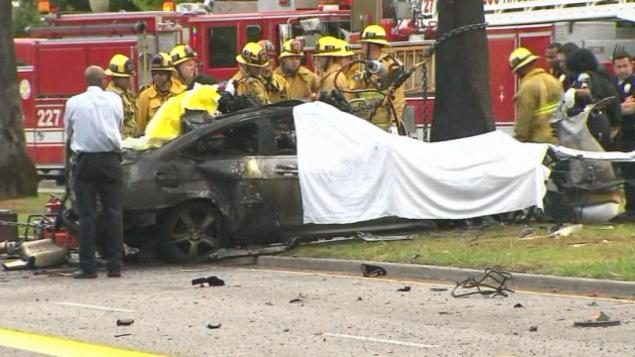 The questions surrounding the precise nature of the “accident” that killed Hastings are given more weight by the fact that the journalist had made enemies within both the FBI and the CIA.

Hastings “had the Central Intelligence Agency in his sights” and was set to release an article exposing the agency, according to L.A. Weekly.

The Obama administration and the Justice Department have openly claimed the authority to assassinate American citizens anywhere in the world if they are deemed a national security threat. A number of American citizens have already been killed as a result of this policy. Is it really that crazy to suggest that Michael Hastings was merely the latest victim of this doctrine?

The New York Daily News highlights the fact that Hastings had received multiple death threats before his demise.

Following his role in bringing down Gen. Stanley A. McChrystal, Hastings was told by a McChrystal staffer, “We’ll hunt you down and kill you if we don’t like what you write.”

“Whenever I’d been reporting around groups of dudes whose job it was to kill people, one of them would usually mention that they were going to kill me,” said Hastings.

Hastings was renowned for being “only interested in writing stories someone didn’t want him to write — often his subjects,” according to Buzzflash editor Ben Smith, adding, “He knew that there are certain truths that nobody has an interest in speaking, ones that will make you both your subjects and their enemies uncomfortable. They’re stories that don’t get told because nobody in power has much of an interest in telling them.”

The fact that Hastings had made a plethora of enemies as a result of his hard-hitting investigative journalism has prompted a deluge of online comment speculating that the writer’s “car crash” was no accident.

“Hastings’ wreck might make sense on the freeway, but I doubt he’d be dumb enough to go 100 mph on Highland. He’s not some dumb college kid,” said one commenter on a local news site.

“A warning to other journalists to not dig too deep,” another Reddit user wrote. “Stick with the party line if you want a long, happy life.”

If this was an isolated incident then there wouldn’t be so many questions swirling about Hastings’ death. However, he’s certainly not the first individual to go up against the military-industrial complex and wind up in a coffin.

“There is reason to believe that intelligence agencies for major powers” — including the United States — know how to remotely seize control of a car,” Clarke said.

On Saturday, Infowars.com posted a video of a talk presented by Dr. Kathleen Fisher, a program manager for DARPA, the Defense Advanced Research Projects Agency, an agency of the United States Department of Defense responsible for the development of new technologies. Fisher admitted that the Pentagon has researched remotely controlling cars through hacking on board computers.

In 2011, Car and Driver magazine published an article substantiating the Pentagon research. “Currently, there’s nothing to stop anyone with malicious intent and some computer-programming skills from taking command of your vehicle. After gaining access, a hacker could control everything from which song plays on the radio to whether the brakes work,” writes Keith Barry, citing research conducted by the Center for Automotive Embedded Systems Security, a partnership between the University of California San Diego and the University of Washington.

“What has been revealed as a result of some research at universities is that it’s relatively easy to hack your way into the control system of a car, and to do such things as cause acceleration when the driver doesn’t want acceleration, to throw on the brakes when the driver doesn’t want the brakes on, to launch an air bag,” Clarke told The Huffington Post. “You can do some really highly destructive things now, through hacking a car, and it’s not that hard.”

Clarke was careful not to directly implicate the government in hacking Hastings’ car. “So if there were a cyber attack on the car — and I’m not saying there was,” he said, “I think whoever did it would probably get away with it.”

He also put credence in the FBI’s claim – despite claims to the contrary by associates of the writer – that the agency was not investigating him. “I believe the FBI when they say they weren’t investigating him,” said Clarke. “That was very unusual, and I’m sure they checked very carefully before they said that.”

“I’m not a conspiracy guy. In fact, I’ve spent most of my life knocking down conspiracy theories,” said Clarke. “But my rule has always been you don’t knock down a conspiracy theory until you can prove it [wrong]. And in the case of Michael Hastings, what evidence is available publicly is consistent with a car cyber attack. And the problem with that is you can’t prove it.”

The journalist’s fiery 4 a.m. single-car crash in Los Angeles came 15 hours after he sent friends an email warning them the FBI was on his tail. ’Hey — the feds are interviewing my “close friends and associates,"’ the message said. ‘Also: I’m onto a big story, and need to go off the [radar] for a bit.’

The Internet erupted with debates about the fiery one-car crash that killed journalist Michael Hastings, who was known as a tenacious reporter unbowed by threats. A community board on Reddit speculated last week that the car was either rigged to lose control or burst into flames at a certain time.

He had a big story and wanted to get off the radar until things cooled down.

The 33-year-old journalist’s fiery 4 a.m. single-car crash June 18 in Los Angeles came 15 hours after he sent friends a panicked email warning them the FBI was on his tail.

"Hey [redacted] — the feds are interviewing my ’close friends and associates,’" reads the email, acquired Friday by KTLA-TV. "Perhaps if the authorities arrive ’BuzzFeed GQ’, er HQ, may be wise to immediately request legal counsel before any conversations or interviews about our news-gathering practices or related journalism issues.

"All the best, and hope to see you all soon," Hastings signed off. The email was sent at around 1 p.m. Monday.

The email ‘alarmed me very much,’ said Staff Sgt. Joseph Biggs, one of the message’s recipients, who provided a copy of the note to KTA. ‘I just said it doesn’t seem like him. I don’t know, I just had this gut feeling and it just really bothered me.’

Read the full article at: nydailynews.com
Michael Hastings "CAUGHT ON TAPE" Running Red-Light Seconds Before Crash
(Video has been edited)


Can Your Car Be Hacked?
By Keith Barry | Hack to the Future

Not too long ago, securing a car meant popping the faceplate off the CD player, slapping a Club over the steering wheel, and locking the doors. As vehicles’ electronic systems evolve, however, automobiles are starting to require the same protection as laptop computers and e-commerce servers.

Currently, there’s nothing to stop anyone with malicious intent and some computer-programming skills from taking command of your vehicle. After gaining access, a hacker could control everything from which song plays on the radio to whether the brakes work.

While there are no reported cases of cars being maliciously hacked in the real world, in 2010, researchers affiliated with the Center for Automotive Embedded Systems Security (CAESS—a partnership between the University of California San Diego and the University of Washington) demonstrated how to take over all of a car’s vital systems by plugging a device into the OBD-II port under the dashboard.

It gets worse. In a paper that’s due to be published later this year, those same researchers remotely take control of an unnamed vehicle through its telematics system. They also demonstrate that it’s theoretically possible to hack a car with malware embedded in an MP3 and with code transmitted over a Wi-Fi connection.

Such breaches are possible because the dozens of  independently operating computers on modern vehicles are all connected through an in-car communications network known as a controller-area-network bus, or CAN bus.

Even though vital systems such as the throttle, brakes, and steering are on a separate part of the network that’s not directly connected to less secure infotainment and diagnostic systems, the two networks are so entwined that an entire car can be hacked if any single component is breached.

So the possibility now exists for platoons of cars to go rogue at the command of computer-savvy terrorists, crazed exes, and parking attendants with Ph.D.s in computer science.

Read the full article at: caranddriver.com