May 16, 2014 Source: wnd.com
‘Opt out’ movement surges in response to Common Core

The Obama administration, shortly after taking control of the federal bureaucracy, changed student privacy laws so that government can track their progress from “cradle to career,” monitoring everything from math and reading skills to values, opinions and attitudes.

More and more people don’t like that. And they are just saying “no” to the government.

It is the amount of student data being collected that ballooned under the new Common Core national education standards, fueled fears of abuse and sparked a growing backlash against the testing system used to scoop up highly personal information.

The “opt out” movement in which parents opt their children out of the standardized tests has spread in recent weeks from New York to Georgia to Alabama.

The cost of resisting, however, can be steep.

Meg Norris was forced out of her job as a Hall County, Ga., teacher last year after she ran afoul of mandatory testing for Common Core.

“We were one of the first counties in the nation to implement Common Core, and at first the teachers felt like we were special, we were all excited. I drank the Kool-Aid,” said Norris. “But after teaching Common Core in my class for about 18 months, I started seeing a lot of behaviors in my students that I hadn’t seen before. They started becoming extremely frustrated and at that age, 12 years old, they can’t verbalize why they couldn’t ‘get it.’”

The frustration, she believes, came from Georgia’s adoption of a set of unproven educational standards and then constantly testing students against those standards. Some schools administer up to a dozen or more high-stakes tests in a single school year.

“I had some kids that were cutting themselves, some were crying, some would stab themselves in the legs with their pencils,” Norris said.

Read the full article at: wnd.com

An Iowa woman jokingly calls it "Satan’s handiwork." A California mom says she’s broken down in tears. A Pennsylvania parent says it "makes my blood boil."

What could be so horrible? Grade-school math.

As schools around the U.S. implement national Common Core learning standards, parents trying to help their kids with math homework say that adding, subtracting, multiplying and dividing has become as complicated as calculus.

They’re stumped by unfamiliar terms like "rectangular array" and "area model." They wrestle with division that requires the use of squares, slashes and dots. They rage over impenetrable word problems.

"That is way too much to ask of a first grader," she said. "She can’t remember them all, and I don’t know them all, so we just do the best that we can."

Simple arithmetic isn’t so simple anymore, leading to plenty of angst at home. Even celebrities aren’t immune: The comedian Louis C.K. took to Twitter recently to vent about his kids’ convoluted homework, writing that his daughters went from loving math to crying about it.

Adopted by 44 states, the Common Core is a set of English and math standards that spell out what students should know and when. The standards for elementary math emphasize that kids should not only be able to solve arithmetic problems using the tried-and-true methods their parents learned, but understand how numbers relate to each other.

"Part of what we are trying to teach children is to become problem solvers and thinkers," said Diane Briars, president of the National Council of Teachers of Mathematics. "We want students to understand what they’re doing, not just get the right answer."

That’s a radically different approach than many parents are accustomed to.

Jennie Barnds, 40, of Davenport, Iowa, was puzzled by her fourth-grade daughter’s long division homework, a foreign amalgam of boxes, slashes and dots with nary a quotient or dividend in sight.

"If we are sitting there for 20 minutes trying to do a simple problem, how is an 8, 9, 10-year-old supposed to figure it out?" she said. "It’s incredibly frustrating for the student and the parent."

Whether Common Core itself is responsible for the homework headaches is a contentious issue.

Stanford University mathematician James Milgram calls the reform math-inspired standards a "complete mess" — too advanced for younger students, not nearly rigorous enough in the upper grades. And teachers, he contends, are largely ill-prepared to put the standards into practice.

"You are asking teachers to teach something that is incredibly complicated to kids who aren’t ready for it," said Milgram, who voted against the standards as part of the committee that reviewed them. "If you don’t think craziness will result, then you’re being fundamentally naive."

Read the full article at: huffingtonpost.ca 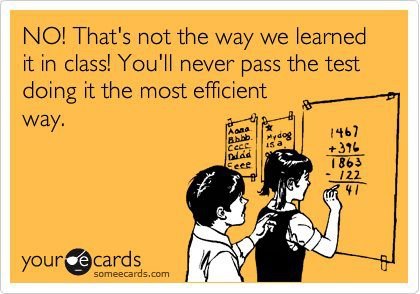 Richard Grove - Learning vs. Schooling & Prophecy vs. the Business Plan