Jan 15, 2010 Source: telegraph.co.uk
Facebook founder Mark Zuckerberg has denounced privacy as a ‘social norm’ of the past as social networking's popularity continues to grow.

Talking in San Francisco over the weekend at the Crunchie Awards, which recognise technological achievements, the 25 year-old web entrepreneur said: “People have really gotten comfortable not only sharing more information and different kinds, but more openly and with more people.”

He went on to say that privacy was no longer a ‘social norm’ and had just evolved over time. 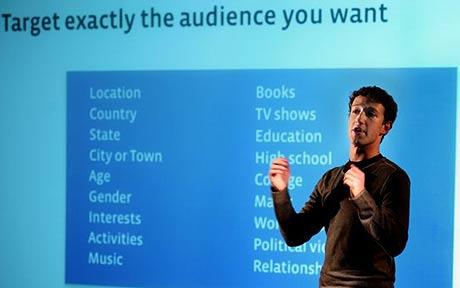 Facebook announced controversial changes to its privacy settings in December 2009 via its 'notifications' tab.
"When I got started in my dorm room at Harvard, the question a lot of people asked was, 'why would I want to put any information on the internet at all? Why would I want to have a website?'."

"Then in the last 5 or 6 years, blogging has taken off in a huge way, and just all these different services that have people sharing all this information,” he explained.

Mr Zuckerberg's statements about privacy chime in with the latest changes made to Facebook’s own privacy settings - which caused controversy and has affected the network’s 350 million user base.

From last December onwards, all Facebook users’ status updates are made publicly available unless the user actively opts to change the settings and make its private. Users were alerted to changes via a ‘Notification’ posted in the bottom right hand corner of the site.

The sites’ users were also given the opportunity to change settings on things like photographs and videos they upload to the site. However, the changes sparked criticism from internet users’ rights groups who said the move was a way for Facebook to facilitate more people making more personal information publicly available without realising it.

The changes also followed agreements Facebook signed with both Google and Microsoft’s Bing, to allow people’s status updates (which are not set to private) to be indexed by both search engines in order to enable the search giants to provide real-time results.

Facebook chief operating officer, Sheryl Sandberg, publicly said in September 2009 that Facebook was making no money from the search arrangement with Microsoft – unlike Twitter – which has signed similar deals and understood to be generating cash from both arrangements with Google and Microsoft. Although all three parties – Twitter, Microsoft and Google – have declined to comment.

Mr Zuckerberg defended the changes made by Facebook to its privacy settings, saying it was in line with the new social norms. “A lot of companies would be trapped by the conventions and their legacies of what they've built," he said. "Doing a privacy change for 350 million users is not the kind of thing that a lot of companies would do.

"But we viewed that as a really important thing, to always keep a beginner's mind and what would we do if we were starting the company now and we decided that these would be the social norms now and we just went for it," he explained.