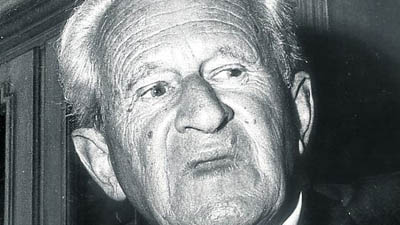 Herbert Marcuse, so-called ’Father of the New Left’, died 35 years ago today. Marcuse was a philosopher, sociologist, and political theorist associated with the Frankfurt School of Social Research.

He was born in Berlin in 1898 to Jewish parents, Carl Marcuse and Gertrud Kreslawsky. In 1916 he was draughted into the army, but he only worked the stables. Apparently fond of the horse manure, Marcuse’s hatred for Germany manifested early: after the Great War, he got involved with communism, and became a member of the Soldier’s Council, which participated in the Spartacist Uprising that involved Rosa Luxemburg’s Communist Party. He then returned to education, and after completing his PhD at the University of Freiburg in 1922, he spent a spell working in publishing, before carrying on his studies at Freiburg under Edmund Husserl (the founder of phenomenology). He wrote a Habilitation under Martin Heidegger, and at first he sought to synthesise Heidegger’s ontology with Marxism, but Heidegger’s support for the National Socialists got in the way.

The National Socialists quickly blocked his academic career, and he joined the Frankfurt School, with which he went into exile in 1933. He ended up in the United States in 1934. And as with his Max Horkheimer, the Americans made him a citizen in 1940. He turned his back on Germany and never returned there to live, even after the war, though his ashes were repatriated in 2003.

During World War II, Marcuse worked for the Office of War Information (OWI) as an anti-Nazi propagandist. From 1943 he worked at the Office of Strategic Services (OSS), the precursor to the CIA. A section chief in the OSS was Leo Lowenthal, another sociologist associated with the Frankfurt School.

The Americans employed him as a leading analyst of Germany. Subsequently, he was offered a senior analyst position in the US State Department, who paid his salary until he retired in 1951.

From 1952 Marcuse got a plush job at Columbia University, then Harvard University, where he developed a new career as a political theorist. From here he went on to Brandeis University (1958 - 1965) and finally at the University of California, San Diego, until he retired. It is during this period that he caused the most harm, corrupting the youth and writing hate-filled books.

The confused responses by the Communist Party in the US and the Communist Party of Great Britain to the Soviet Union’s suppression of the Hungarian Uprising of 1956 led some unhappy communists to re-think their Marxism. This is what gave origin to the New Left. Marcuse, the most shamelessly political and on the Frankfurt School’s outermost Left fringe, was at the forefront of this development. His book, Eros and Civilization, published in 1955, exhibited a weird libidinal obsession and was the first volley in the assaults to come. In it he synthesised Freudian psychoanalysis, a pseudoscience, and Karl Marx:

According to Marcuse . . . Western Culture was founded by a band of sons who wanted to sleep with their mother and killed their oppressive father (patricide). In guilt, the sons reestablished the tyranny of the father and the result was European Man. Marcuse speculated that Western tyranny will be broken through a cathartic event: minorities and women would rebel, crushing Western Culture and ushering in a fuzzy utopia that is liberated from logic and reason. This utopia will be led by Frankfurt intellectuals. Marcuse calls this catharsis the “return of the repressed.”[1]

Another book, One-Dimensional Man, published in 1964, he surveyed the rise of advanced capitalism and bureucratic-repressive Communism of the Soviet Union and the decline of revolutionary potential in the West. He argued that advanced industrial society created bogus needs, which integrated individuals into a matrix of production and consumption via mass media, advertising, industrial management, and contemporary modes of thought, creating a one-dimensional individual. Agaisnt this he advocated a ’great refusal’, championing the non-integrated forces of minorities, outsiders, and radical intelligentsia, in order to nourish oppositional thought and behavior through radical thought and opposition.

During the 1960s and 1970s, Marcuse cheerfully welcomed invitations to speak at the protest events organised by naive and idealistic students, among whom this elderly Marxist became an icon. Interestingly, he grumpily rejected the label ’Father of the New Left’.

His writings influenced individuals like Abbie Hoffman and Jerry Rubin, the most iconic of the New Left activist leaders. They were one of the ’Chicago Seven’, tried for inciting riots at the 1968 Democratic Convention. It is worth examining briefly his ideological spawns.

Rubin had matricidal feelings that resulted in life-long search for therapy, in which we can include participation in the New Left as a cathartic release of tensions. Writing of a ’psychic therapy’ session in which participants sought liberation from their ’childhood deprivation’, Rubin stated:

I started shouting at my mother for specific messages she gave me. ’Thanks Mommy. You white-skinned no-good sexless asshole cap-toothed cancerous venom of a snake who destroyed me from birth . . . You taught me to hate myself, to feel guilty, to drive myself crazy, . . . to hate my body, to hate women . . . I have your self-righteous right-wrong should-should not programming . . . with that stupid JUDGE inside me that I got from you. I don’t see people as they are, but as they fit my standards, my self-righteous beliefs . . . Oh, it is so liberating for me to tell the truth. MOMMY I AM GLAD THAT YOU DIED. IF YOU HAD NOT DIED OF CANCER, I WOULD HAVE HAD TO KILL YOU. . . You taught me to compete and compare, to fear and outdo. I became a ferocious achievement-oriented, compulsive, obsessive, live-in-my-head asshole . . . Well, fuck you, Mommy, fuck you in the ass with a red hot poker.[2]

Bolton argues that Rubin’s involvement in New Left activism was redirected aggression against his mother.

Rubin, the Yippie, later became a Wall Street businessman. He was an early investor in Apple Computers and, completing his transition to Yuppie, by the 1980s had become a multimillionaire.

Abbie Hoffmann was even worse: a narcissistic sociopath and a chronic manic-depressive, he graduated from juvenile delinquent to revolutionary,

revolutionis[ing] his sociopathy into a New Left ideology that justified as a supposedly higher purpose, killing assault, and theft. His experience at ’rumbling with the gangs’ and stealing as a youth was sublimated into social revolt. Hoffman’s best-selling Steal this Book is a manual for urban guerilla warfare with no pretence of peaceful protest. . . His discussion of weapons included ways to knife the ’pigs’ (police):

Probably one of the most favored street weapons of all time is the good old ’shiv,’ ’blade,’ ’toe-jabber,’ or whatever you choose to call a good sticker. Remebering that today’s pig is tomorrow’s bacon, it’s good to know a few handy slicing tips. [3]

Hoffman was later arrested on drug charges, but he skipped bail, underwent plastic surgery to alter his appearance, in lived in hiding until 1980, when he finally surrendered to the authorities. Between 1984 - 1986, he teamed up with Rubin to entertain audiences with Yippie versus Yuppied debates, charging $5000 per appearance. A steal, to be sure. He then tried his hand at stand up comedy, but proved pathetic and talentless. Finally, in 1989 he committed suicide.

Another person influenced by Marcuse was Noam Chomsky; he knew and liked Marcuse, ’but thought very little of his work’.

This said, in The Frankfurt School in Exile Thomas Wheatland argues that

I don’t know which is worse!

Marcuse wrote three essays during this baleful period. One, ’Repressive Tolerance’, has some merit, as do parts of One-Dimensional Man; he argued that capitalist democracies can have totalitarian features, something that has been echoed by theorists on the Right. The other two essays, however, lacked redeeming features: An Essay on Liberation (1969), celebrated the movements of the era and even provided a justification for the tactics of the anti-fa, before they even existed. Roger Griffin, professor of education at the University of Vermont writes that

Marcuse . . . argued forcefully that the oppressors in universities employ notions of free inquiry, the encouragement and support for all sides of a matter to be investigated, aired, and debated, academic freedom, and intellectual autonomy to cloud the minds of students and defuse their commitment to do what needs to be done, and to maintain power for themselves. They can’t be allowed to persist in their misguided and evil ways. As the slogan goes, no free speech for fascists.[5]

In turn, Counterrevolution and Revolt (1972), in which he argued that the hopes 1960s—at least the hopes of people like him—faced a counter-revolution from the Right—something to be welcomed, for sure, and long overdue, but which he, hater of all things Western, viewed with alarm. Time has proven that he wasn’t entirely wrong on this point.

His final work, The Aesthetic Dimension (1979), explored the implications of modern art in bourgeois society. Though he did not intend it this way, his predictable argument could be applied from the Right as well as the Left.

Fortunately, his theories did not pass muster with everyone. Leszek Kołakowski, who saw the worker’s paradise and was instantly repelled by it, concluded that Marcuse’s ideal society ’is to be ruled despotically by an enlightened group [who] have realized in themselves the unity of Logos and Eros, and thrown off the vexatious authority of logic, mathematics, and the empirical sciences’.[6] The ethicist Alasdair MacIntyre has asserted that almost all of Marcuse’s key positions are false and that his generalisations were based upon the total absence of any account of contemporary social structure. Mike Featherstone has dismissed his critiques of consumerism as simplistic. And Paul Gottfried, who knew Marcuse, wrote ’Like other members of the Frankfurt School — most notably Theodor Adorno, with whom he had been associated since the early 1930s — Marcuse claimed to detest bourgeois civilization and supposedly wished to see it destroyed’.[7]

Like Horkheimer, Marcuse belongs in the eighth circle of hell. His face bears the stigmata of a psyche haunted by hate. Little good came out of this man.

The Socialist-Capitalist Alliance: the Fabian Society, the Frankfurt School, and Big Business

More on Cultural Marxism, the Frankfurt School, Repressive Tolerance, and Political Correctness: Insight - Anchorman 2 Review & The Politics of Will Ferrell

Radio 3Fourteen - Benjamin Shapiro - Primetime Propaganda: The Hollywood Story of How the Left Took Over Your TV

Gavan Kearney - Hour 1 - The State of the Art, Corrosive Counter-Culture & Attack on Beauty