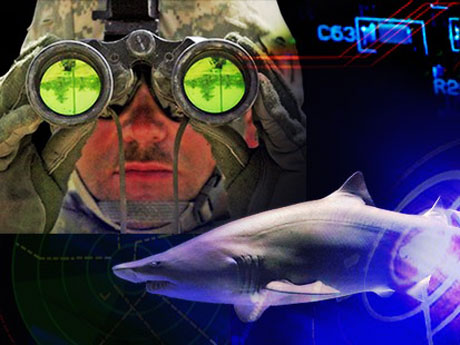 Creating armor that renders a soldier invisible. Stimulating the brain to suppress sleep for days. Arming sharks with chemical implants and cameras to work as spies.

This year the Pentagon will spend $78 billion — about half of all government research and development dollars — on a variety of projects, according to the American Association for the Advancement for Science (AAAS).

The vast majority - about $68 billion - goes to traditional spending, like weapons development and space systems. But some fringe research mimics the best of science fiction.

There seems to be no failure of imagination in advancing warfare, but some experts fear these farfetched projects show a little too much imagination.

Just this month, the government confirmed that an Ohio Air Force laboratory had asked for $7.5 million to build a nonlethal "gay bomb," a weapon that would encourage enemies to make love, not war. The weapon would use strong aphrodisiacs to make enemy troops so sexually attracted to each other that they'd lose interest in fighting.

Just three years ago, the military funded a specious study of psychic teleportation, according to the Federation of American Scientists. An 88-page report prepared by the Air Force Research Lab contended that moving through mind powers is "quite real and can be controlled."

"The military has a lot of crazy ideas," said Noah Shactman, editor of the Wired blog Danger Room. "But it's hard to turn these ideas into action."

In her book "Imaginary Weapons," military expert Sharon Weinberger writes that the federal government is spending taxpayer money on war technology at a pace of about $50,000 per second.

"If you don't support long-term investment in funding risky science and technology, you won't get breakthroughs," Weinberger told ABC News.

But investing in wacky weaponry can also have the opposite effect.

"There is more pressure to fund fringy things, much the same way a bankrupted person will be tempted to play the lottery," said Weinberger. "There is the risk that agencies starved of funding will invest in schemes that promise high payoff, but aren't a sound investment," she added.

The Spark Behind New Medicines and the Internet
Scientists are exploring beamed speaker systems that only one person can hear and foam that makes the enemy slip and fall. And they are using something akin to microwaves to penetrate the skin and make the enemy feel as if they're on fire, according to Shactman.

The controversial hafnium bomb — originally a $30 million project to build a nuclear grenade — never got off the ground. The idea was either "the beginning of a new superbomb, or the biggest fizzle since cold fusion," Weinberg wrote in a 1998 article in the Washington Post.

"When it comes to Pentagon funding it's important that imagination is tempered by two things: the laws of nature and the laws of the budget," said Weinberger.

Some of the military's most fantastical ideas come from the Defense Advanced Research Projects Agency (DARPA). The $3 billion agency — which laid the foundation for today's Internet — says it is the "technological engine" for the Department of Defense.

"We focus on research that has a high risk of failure, but if it succeeds, it makes a revolutionary difference in national security," said spokesman Jan Walker. "We spend a lot of time talking to the senior leadership to ask them, 'What are the things that keep you up at night?'"

The agency created Stealth, Global Hawk, Predator and command and control systems that are being used today in Iraq. They also funded water purification systems and translation devices.

"We have a robust investment in urban warfare," said Walker. "We worried well before 9/11 about biological defense before the anthrax threats."

But Alexis Debat, senior fellow for national security and terrorism at the Nixon Center in Washington, D.C., told ABC News that many of these inventions have had "little value in the fight against terrorism."

"It's a very American thing to think that everything and anything can be solved by technology," said Debat, a consultant for ABC News. He said the military needs to focus more on human resources, recruiting more Arabic speakers and using old-fashioned police work in communities in Iraq and Afghanistan.

Military writer Weinberger agrees that weapons research is still dominated by projects more appropriate for the Cold War — like the F-22 aircraft.

"It's a really fine aircraft with some great technology, but not of much use for the war on terror," said Weinberger. "It was proposed at one point that it could help hunt down IEDs (improvised explosive devices). But the idea of using an aircraft that costs in the tens of millions of dollars to defeat a homemade bomb that costs a few hundred dollars is a bit absurd."

Much of the focus of the latest research is in neuroscience. Researchers at Stanford and Columbia universities are exploring the use of magnetic stimulation to keep soldiers in battle awake for days while preserving their cognitive function.

The military industrial complex, coined in the age of President Dwight Eisenhower, is alive and well today, according to Debat, whose research into how Muslims fight is partially funded by the Department of Defense.

"It's an unwritten rule in the U.S. economy that defense companies play an important role in the stock market as anchors of stability," he said.

"Living here in Washington, you have no idea how we are inventing enemies," said Debat. "Hundreds of people are trying to figure out how to make China our enemy because there is so much money and power in the Pentagon."

Still, "risky" research can offer advances that have ramifications far beyond the battlefield.

DARPA is funding research to create a prosthetics arm that can function like a real hand. The device gives sensory perception back to the fingers through nervous system signals.

Researchers at MIT are developing an artificial "exoskeleton" that will not only diagnose a soldier's injury, but treat it.

Drugs have been developed to enhance aerobic function without lung injury.

Global positioning systems, composite materials for aircraft and many medical advances owe the military for their entry into the civilian world.

"Much has carried over into the economy, so if you put it all together, it's worth it," said Kei Koizumi, research and development policy director at AAAS.

"The technology was built on years of earlier science and development," Weinstein said. "No one woke up one day and said, 'I'm going to build a stealth aircraft.' So when you ask: Do we take national security risks if we don't try crazy things, my answer is, 'No.' Should we try risky things? Absolutely."

"Let's let U.S. enemies do crazy things," she said. "And let's make sure the U.S. government does smart things."