From Nomadic Tribesmen to Nazi Icons: Who Were the Aryans?

The word “Aryan” has become inseparable from poisonous Nazi doctrine over the last century, in which it became a term for describing a supposed master race of non-Jewish Caucasians, usually having Nordic features. It’s ironic when you consider “Aryan” was originally a perfectly innocent ethno-linguistic term for an ancient cultural group who couldn’t have been any different in appearance to the supposedly racially pure peoples of northern Europe the Nazis envisioned. 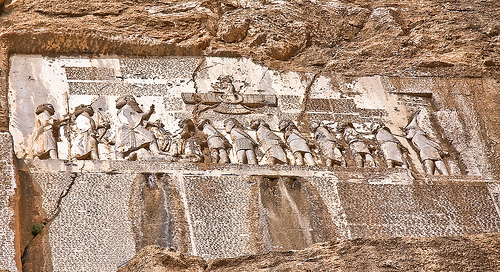 The Behistun Inscription, engraved high on the side of Mount Behistun in the Kermanshah Province of Iran – contains the oldest epigraphically-attested reference to an Iranian language. Dating to the 6th century BC, it describes itself as having been composed “in ariya” - in Iranian.

Far from being blonde-haired, blue-eyed, fair-skinned and homogenous, the “Aryans” were a dark-skinned nomadic Eurasian tribe who spread from Central Europe and Central Asia into Southern Asia, interbreeding with a variety of other peoples. Our knowledge of these “Aryans” is sketchy, and there’s still a lot to be determined about them, both through anthropological and archaeological research. But we can be quite sure that they bore no direct relation to the modern inhabitants of Germany and Scandinavia. And certainly they were no master race.

“Aryan” is no longer in use as a technical term – because of its inherent political-incorrectness and its Nazi overtones, it’s been superseded by “Indo-Iranian.” However, it’s useful to be aware of the way “Aryan” was gradually manipulated by misguided western scholars and Nazi propagandists, so as to understand how – in the hands of a megalomaniac so expert at twisting facts to suit his murderous rationale as was Adolf Hitler – a simple word misinterpreted can be a dangerous thing indeed.

“Aryan” originates from the Sanskrit word arya or ariya, which can be observed in a variety of ancient texts, most notably the Vedas – the oldest layer of Sanskrit literature, dating to possibly as early as 1500 BC. It’s been interpreted as having a variety of different meanings – civilized, noble, superior or a person of higher consciousness.

It was used as a term of self-designation by nomadic Indo-Iranian tribes of Indo-European descent in the prehistoric period. Indo-European refers to an enormous family of several hundred related languages and dialects, from which derive most major tongues spoken in Europe, the Iranian plateau and South Asia today. The Indo-Iranians were the easternmost sub-branch of this huge group. They inhabited parts of modern Iran, Afghanistan and India.

The name Iran is in fact a modern cognate of “Aryan,” meaning “lands of the Aryans.” The Behistun Inscription – engraved high on the side of Mount Behistun in the Kermanshah Province of Iran – contains the oldest epigraphically-attested reference to an Iranian language. Dating to the 6th century BC, it describes itself as having been composed “in ariya” – i.e. in Iranian. (Learn more about the Behistun Inscription in this “face-off” vs. the Rosetta Stone).

In 18th century western theory, the Indo-Iranians somehow came to be considered as the forbears of the entire Indo-European language group. How did this happen? In short, Western scholars began making a number of wildly inaccurate assumptions, innocently in some cases, lazily in others, and with malice in others still.
How “Aryan” Became Twisted by Western Scholars

“Aryan” first entered the western lexicon in the 1700s and 1800s with the translation of the Vedas. At this point it was a harmless linguistic term for describing a certain cultural group. Its connection to an “Aryan race” wasn’t implicit. That shift occurred gradually throughout the 19th and early 20th centuries, at the hands of Western, mainly European, academics.

It was German Indo-Europeanist scholar Friedrich Schlegel who set this line of reasoning in motion. Writing in 1808, he developed a theory linking arya to the German word ehre, meaning “honour.” He also connected it to early Germanic names containing the element ario, such as the Germanic warrior Ariovistus. Ariovistus was the heroic leader of an alliance of Germanic tribes who, in the 1st century BC, were defeated by Julius Caesar at the Battle of Vosges, as documented in Caesar’s Commentarii de Bello Gallico.

It’s important to note at this point that the whole “Aryan” racial argument was one based unequivocally upon ideology, not science – no solid verifiable evidence for the theory had at any stage been put forward, neither by Penka, nor de Lapouge, nor even Kossina. But it had been sufficient to speed Europe and the world on a catastrophic spiral towards total war, and the Holocaust.

We of course can’t blame the horrors of 1939-1945 on one simple word. Hitler and the Nazis had already long since set their sights upon persecuting and eventually exterminating certain peoples whom they perceived to be their enemies and inferiors; “Aryanism” was but a handy framework to support their cause. Suppose “Aryanism” had never been developed? Hitler was such a master fantasist that he would probably just have created a different rationale for his genocidal actions.

The Jews of course weren’t the only group targeted by the Nazis – they also loathed gypsies, blacks and slavs too. The all-encompassing concept of a Germanic “Aryan master race” meant that they could comfortably position all of these peoples as standing in opposition to their hate-filled belief system. The rest is grim history.

It’d be pleasing to conclude that “Aryanism”was crushed with the destruction of Nazi Germany and the liberation of the concentration camps in 1945. But sadly, that isn’t true – it still persists among fanatical fringe groups the world over, such as white supremacists and neo-Nazis.

It seems incredible, in the full glare of historical hindsight, that anyone would still believe some of the nonsensical ideas the Nazis used to support their racist doctrine. Take this line on the origins of the “Aryans” by Alfred Rosenberg, the Nazi party chairman, whom Hitler tasked with synthesizing Nazi racial code into a single text, the pseudoscientific treatise The Myth of the Twentieth Century (the second most influential book in Nazism after Mein Kampf).

“From a northern centre of creation which,” wrote Rosenberg, “without postulating an actual submerged Atlantic continent, we may call Atlantis, swarms of warriors once fanned out, in obedience to the ever-renewed and incarnate Nordic longing for distance to conquer and space to shape.” So the “Aryans” actually came from the legendary city of Atlantis?

Read the full article at: heritage-key.com

Also tune into Red Ice Radio on discussion of the ’Aryans’:

Pierre Sabak - Priesthood of the Nazarenes, The Nazis & Zionists