Here is a sobering thought. How many of those left-wing defenders of free speech who stood to remember the victims of Charlie Hebdo also condemned the PEGIDA (Patriotic Europeans against Islamization of the West) anti-Islamification rallies in Dresden over Christmas? How many would have supported the counter-rallies in which the German government is doing so much to encourage?

What would the reaction of those same people have been if the targets had been members of anti-immigration Front National or any other right wing or nationalist group. We know the answer because of their reaction after the murders of Dutch anti-Islamisation campaigner Pym Fortuyn and film-maker Theo Van Gogh; sneers, contempt and an undisguised glee that the right-wing had got what it deserved.

And what of the victims themselves? Indeed they were in many ways caricatures of the antifa campaigners who would go to the barricades to preserve mass immigration and the end of France. 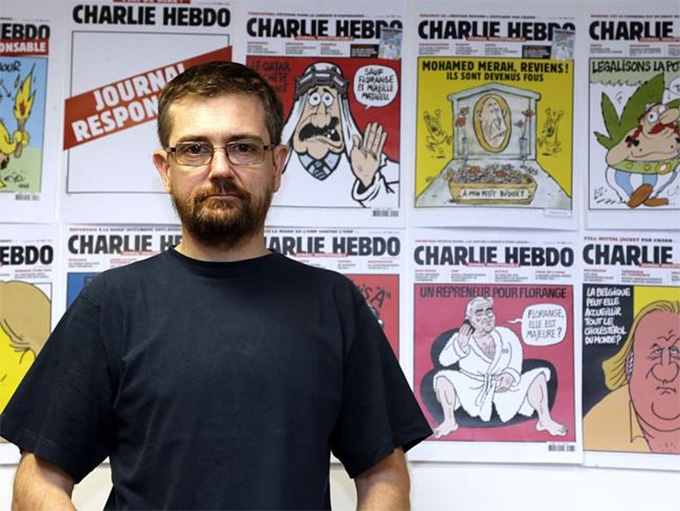 Stéphane Charbonnier on of the victims

Take Stéphane Charbonnier, the editor of Charlie Hebdo, and one of the victims. He is of a kind you can find in every White country in the West. A dedicated “antifascist” who occupied a crucial opinion-shaping position in the French media. In fact, as Joshua Bonehill points out, everybody killed in the attacks today would have almost certainly have been anti-White and left-Wing and there’s a great irony behind that as well.

Another victim was cartoonist Georges Wolinski who had a strong Jewish identity and whose work appeared in a number of left-leaning publications besides Charlie Hebdo, including Liberation (which has agreed to allow Charlie Hebdo to use its offices in the wake of the murders).

And it fell to one of the most unlikely voices to make a penetrating and uncomfortable observation. Andjem Chaudhary is Fleet Street’s favourite firebrand Islamic preacher and a man said to have encouraged thousands of young Muslims to go on Jihad.

He tweeted: “If freedom of expression can be sacrificed for criminalising incitement and hatred, Why not for insulting the Prophet of Allah?”

He has a fair point. Why are we free to sneer and disparage Islam while criticism of the secular religion of the Holocaust is out of bounds? In Britain Simon Sheppard has spent years behind bars for merely distributing Holocaust revisionist literature.

And not just the Holocaust, criticism of gay marriage, women priests, abortion and much else are also off limits. Only a few months ago in Britain, Garron Helm, a 21-year-old Liverpool man, was jailed for insolence after he got into a Twitter spat with Luciana Berger, a Jewish female politician.

She had defended the previous Labour government’s policy of mass third world immigration against the wishes of the population. He had responded that you could always trust a Jew to show their colours eventually. For that he got a month in prison. If he had criticised Islam in such stark terms it is unthinkable he would have been prosecuted. One law for them, one for us.

And what use was Western freedom of speech to the people of Gaza when 3,000 were killed in the Israeli bombardment last year. How many know that seventeen journalists were among the dead? Freedom of speech is not an issue when you can decide which stories are covered and which are not.

In a Europe where the mildest criticism of gay marriage or immigrants brings with it media-led howls for prosecution, the double standard towards Islam is glaring. In the end, as regular readers of the Occidental Observer will be only too aware, the freedom of speech issue is a complete red herring.

What matters is ethnic group power and as Lenin said “who? whom?” — which group is in a strong enough position to dish it out, and in the West these days there is no doubt who that is. A crisis like this is too good to waste. Before the blood has been swept away Jewish journalists were maximising this heaven-sent opportunity to stir up enmity.

The Jewish media and their puppets will be working hard to make sure that the debate stays framed around the issue of “extremist religion” by which they means both Christianity and Islam. They are desperate to avoid an ethnic dimension emerging, or that people start questioning the role of Jews in creating Third World immigration into the West. Or calling attention to the strong support that the organized Jewish community has giving to implement laws censoring free speech related to ethnic conflict throughout the West. Heavens knows where those questions would lead.