Mar 29, 2007 Source: news.bbc.co.uk
Hi there, this is in regards to the new Cervical cancer Vaccine by Merck, some countries will make it mandatory -
I didn't expect european countries will do so, I guess I was wrong :(

Ed Comment: This is insane, see related articles! Thanks for sending along the article Alex! 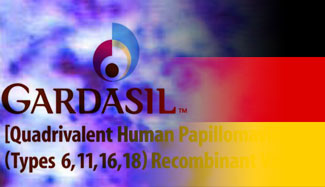 Young girls in Germany are to be vaccinated against the virus that causes cervical cancer.
Italian health officials have also recommended 12-year old girls are immunised against human papillomavirus.

The issue has been controversial as some parents fear a vaccine against a virus which effectively is sexually transmitted could promote underage sex.

Government advisors are considering whether the HPV vaccine should be introduced in the UK.

Gardasil, made by Merck and Sanofi Pasteur, offers protection against HPV types 16 and 18, which are responsible for 70% of all cervical cancers and types 6 and 11, which cause about 90% of cases of genital warts.

UK-based GlaxoSmithKline also has a HPV vaccine, called Cervarix, in development but which has not yet been licensed in Europe.

The Standing Commission for Vaccination at the Robert Koch-Institut in Germany has recommended the universal vaccination of girls aged 12 to 17 years, four months ahead of schedule.

Although boys can pass on HPV infection, the Commission has not recommended that they also receive the vaccine.

Gardasil was already available from pharmacies but the move means that state insurance companies will fund the cost of the course of three injections in teenage girls.

The Italian Ministry of Health announced that vaccination of 12 years old girls in Italy can start as soon as regional vaccination centres are prepared.

Around 80% of sexually active women can expect to have an HPV infection at some point in their lives.

In an editorial published last year, The Lancet called for mandatory vaccination against HPV for girls in all EU member states once they are 11 or 12.

Some experts have raised concerns about the heavy promotion of the vaccine by companies involved.

A spokesperson for the Department of Health said introduction of HPV vaccination was currently under investigation by the Joint Committee on Vaccination and Immunisation.

A study in Manchester of parents attitudes to HPV vaccine and research by the Department of Health had shown that most parents have not heard of HPV and were not aware of the role of HPV in cervical cancer.

Parents had concerns about offering a vaccine that protects against a sexually transmitted infection to children at a young age and the sexual health issues that could arise.

Cancer Research UK's medical director Professor John Toy said: "We are very keen to find out whether HPV vaccines will be offered as part of a nationwide programme in the UK.

"But we recognise that an initiative of this scale requires thorough consideration, especially since it would need to work alongside the highly-effective cervical cancer screening programme."