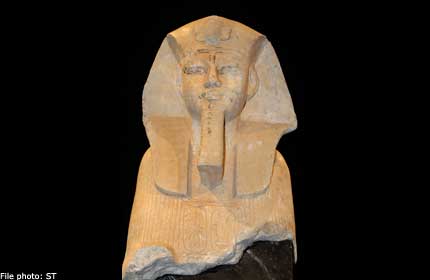 Archaeologists have discovered a giant statue of Egypt’s famous pharaoh Amenhotep III at his mortuary temple in the southern city of Luxor, the antiquities authority said on Tuesday.

The 13-metre-tall (43-foot) statue was found buried in seven pieces at the mortuary temple of Amenhotep III at Kom al-Hitan.

It was one of two statues placed at the northern entrance of the temple, and was probably destroyed during an earthquake in 27 BC, the antiquities authority statement said.

"The archaeological team is now working to clean, restore and collect the seven pieces and find the head of the statue," the statement said.

It also said it was hoped the statue’s twin would be unearthed soon.

Amenhotep III, who ruled Egypt between 1390 and 1352 BC, is the father of Akhenaten, the "heretic pharaoh" considered a precursor of monotheism because he tried to impose the exclusive worship of Aten. 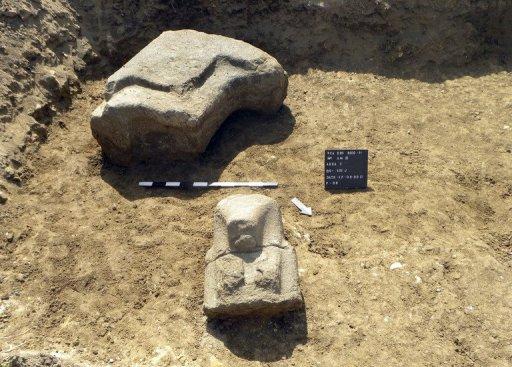 Parts of a statue are seen during the excavation of an area close to the Temple of Amenhotep III in western Luxor. Archaeologists have discovered a giant statue of Egypt’s famous pharaoh Amenhotep III at his mortuary temple in the southern city of Luxor, according to the antiquities authority. Source 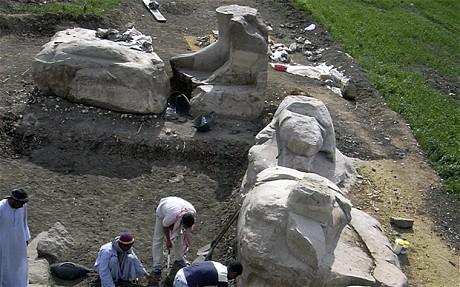 The ninth king of the 18th dynasty was the son of Thutmose IV and Queen Mutemwiya. He married Tiy, daughter of Yuya, who was a chancellor of the north and was a priest of Hermonthis and Amon. Egypt was enjoying a peaceful time during Amenhotep’s reign, thus allowing him to concentrate on more artistic renewals. He married daughters of foreign kings, including a Mitanni princess and one from Babylon. This solidified his international standings. During his reign he enlarged many temples. He built Malkata on the western shore of Thebes, south of Medinet Habu. This complex was a miniature city with offices, houses, chambers, chapels and apartments. Close to Malkata he built a lake for his queen. Next to the lake he built a palace for his harem and a palace for Queen Tiy. He built the famous Colossi of Memnon, along with the rest of his huge mortuary temple on the West Bank of Luxor, and is accredited with building the Temple of Luxor. Amenhotep spent years improving Karnak, by adding temples and a row of sphinxes that linked it to the temple of Amon at Luxor. Amenhotep died in his mid fifties. His heir was the infamous Akhenaten. Source