Jul 3, 2013 Source: 21stcenturywire.com
The global warming debate has become so politicised, that the public have been forces to ‘choose their science’ along political lines, but by examining history, it’s possible that cooler heads might prevail…

How many TV films and press photos do we see in the “unbiased information providing media” of the Arctic – in winter? Not in summer, but in winter. Many glaciers are retreating, a large number are advancing. Attempts at painting a picture of the Antarctic ice sheet “melting rapidly” have been a failure, at least to date but we can count on “unbiased media” to do what it can - to raise the global warming alarm.

By the 1830s the science now called glaciology was emerging, and alarming. Swiss and French scientists studying Alpine glacier advance and retreat used data on historical, meteorological, economic and agricultural changes in the Alpine region. They constructed models of rapid glacier advance and retreat that were unsettling to established scientific opinion, and in particular to the also-emerging science of what is now called geology. At the time this infant science, founded in the 1790s was dominated by the views of the “father of modern geology”, British scientist James Hutton. 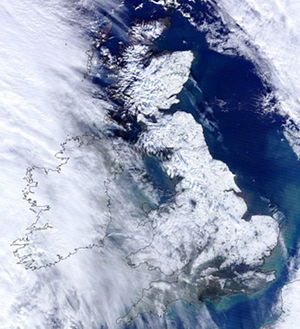 Hutton was opposed to glaciology from the start – for pure ideological reasons. He was also, for example and for the same reasons, opposed to what later became known as overthrust folds, where geologically younger strata lays below older strata. Any such thing as tectonic plates and drift would have been totally rejected by Hutton, also for the same reasons.

He believed in “God’s work”, that is very slow and sure, therefore predictable, but what can or should surprise us is that Hutton in the 1790s believed that CO2, emitted by human beings, was able to harm local or even regional climate. In extreme cases this CO2, called “phlogiston”by Hutton’s compatriot scientist Joseph Priestley, could in their view make it impossible for humans to survive.

Swiss and French glaciologists, such as de Saussure, Contejean, Perraudin, Thurmann, Cuvier, Wetzel and others, by the 1830s, concluded that glacier advance and retreat can be rapid on a historical timeframe and basis. In as little as 30 years, with global or regional climatic, geomorphological, tectonic, volcanic and even human geographical factors accelerating the process either way, glaciers can rapidly move a long way, advancing or retreating. Today, surprisingly, the idiot media asks us to imagine that glaciers should either stay fixed, or only advance because “otherwise there is catastrophic climate change”! By the 1830s, some 180 years ago, scientists were able to say that in either mode, the process gains momentum and can continue for several decades or longer. Systems theory wasn’t yet invented, but today we know all about positive feedback.

Glacial advance and retreat may be slow to start, but once started it accelerates. When in advancing mode glaciers have a major downward effect on local and regional temperatures – and in the early 19th century this was the major fear.

One simple reason for this fear was that a period of over 350 years from about 1450 to beyond 1800 are called “Europe’s Little Ice Age”. No exact completely accepted theory explains why Europe, and certainly North America, and northern Asia, all experienced this Little Ice Age – but it happened. In addition, the historically documented accounts of the damage caused, including repeated massive flooding in Europe’s North Sea region, constantly retreating farmlands, and recurring periods of famine are impossible to ignore.

For many scientists, events such as the Maunder Minimum of sunspot cycles for about 60 years in the 18th century, and the Dalton sunspot cycle minima of about 1806-16 (in Sunspot Cycles 5 and 6), possibly intensified or aggravated but did not cause this cold phase – which in human historical terms but not in geological terms was long. Warming phases during the Little Ice Age were short and aborted rapidly, for example through about 1770-1785. Although “heretical” this can easily be compared with the warming phase of about 1980-2000.

In all of the northern hemisphere, the year 1816 was called “the year with no summer”, but this is usually attributed only to the 1815 Tambora tectonic-volcanic explosion, 10 times more powerful than the 1883 Mount Krakatau explosion. Tambora blasted about 12 cubic miles of dust, rock and gas into the atmosphere, submerging the island of Sumbawa with incandescent ash and lava, and instantly killed about 10,000 persons. Sunsets in Europe and North America were deep red-tinged for months. Its impact on global climate was very real.