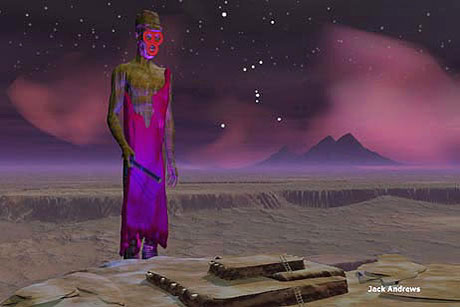 Humans naturally seem to resonate with the hermetic maxim “As above, so below.” We like the idea that the earth mirrors the stars. We even try to enhance this duality by constructing pyramids, temples, stone circles, henges, or sacred villages to reflect star patterns. Biblically speaking, God’s will shall be done “in earth as it is in heaven.”

But why did ancient astronomer-priests from diverse cultures around the world apparently focus on the constellation Orion as the supreme celestial template?

As some readers know, the primary “Orion Correlation Theory” (OCT) was developed in Robert Bauval and Adrian Gilbert in their international bestseller The Orion Mystery. The co-authors discovered an ancient “unified ground plan” in which the pyramids at Giza form the pattern of the belt of Orion.

According to their theory only briefly summarized here, the Great Pyramid (Khufu) represents Alnitak, the middle pyramid (Khafre) represents Alnilam, and the slightly offset smaller pyramid (Menkaure) represents Mintaka. In addition, two ruined pyramids —one at Abu Ruwash to the north and another at Zawyat al Aryan to the south— correlate to Saiph (Orion’s right foot) and Bellatrix (Orion’s left shoulder) respectively, while three pyramids at Abusir farther south correspond to Orion’s head. http://www.robertbauval.co.uk/articles/articles/gizaorion.html
• (A number of researchers have disputed either all or part of the OCT since its publication nearly a decade ago. http://www.teamatlantis.com/yucatan_test/orion1.html
• And most recently: http://www.mysterious-america.net/cygnus-orion.html
and also: http://www.andrewcollins.com/page/articles/Cygnus_Orion_Giza.htm.)

Egypt was not the only place, however, where Orion’s influence was felt.

Inspired by Bauval’s work, I stumbled across an Orion Correlation that the Anasazi (ancestral Hopi Indians) constructed in Arizona from about 1050-1300 AD. Every major star in the constellation corresponds to a specific masonry village site. The terrestrial replication of the celestial pattern is uncanny. 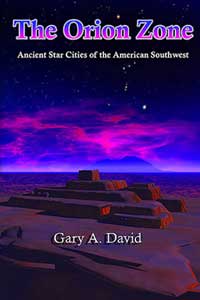 About one hundred miles west of Aswan in the Sahara Desert lies an archaeological site called Nabta Playa. Only ten to eleven feet in diameter, this megalithic calendar circle has a north/south line-of-sight as well as a summer solstice sunrise alignment. According to former NASA physicist Thomas G. Brophy, Ph.D., three stones inside the circle mirror the pattern of Orion’s belt at the meridian for this season during the period 6,400 to 4900 BC. Three other interior stones represent the shoulders and head of the constellation for the astoundingly early date of 16,500 BC.

Another set of megaliths south of the circle at Nabta Playa aligns to the vernal equinox heliacal rising [http://www.answers.com/topic/heliacal-rising] in 6300 BC of six key stars in Orion (Alnitak, Alnilam, Mintaka, Betelgeuse—Orion’s right shoulder, Bellatrix, and Meissa—Orion’s head). This vernal equinox heliacal rising happens only once per precessional cycle (nearly 26,000 years).
Satellite Imagery Measures of the Astronomically Aligned Megaliths at Nabta Playa (pdf)

Rock art researcher Rob Milne has found at least three distinct rock engraving sites in South Africa that have been laid out to reflect Orion. At Boomplaas, for instance, an alignment of engraved stones mirrors Orion’s belt as it appears on the summer solstice, December 22nd. Another alignment of stones at the same site imitates the belt during the rising of the constellation shortly before sunrise on the winter solstice, June 21st. Check out Rob’s fine Web site replete with photographs from his expeditions in the bush. http://sabic.co.za/robmilne

Orion Correlations indeed seem to be popping up all over the world. Just over thirty miles north of Mexico City the massive site of Teotihuacán also apparently reflects the stars of Orion. In particular, the configuration formed by the Pyramid of the Moon, the Pyramid of the Sun, and the Pyramid of Quetzalcoatl spatially correlates to Mintaka, Alnilam, and Alnitak respectively, i.e., the belt. http://www.philipcoppens.com/orionimage.html

Author Page Bryant has suggested that two sites erected by the Mound Builders of North America are potentially Orion correlations as well. Both O’Byam’s Fort in Hickman County, western Kentucky and the Hill Works in Ross County, Ohio (the latter about thirty miles northeast of the Serpent Mound) consist of three major mounds corresponding to the belt stars, with one of the three slightly offset in each case.
[Bryant, Starwalking: Shamanic Practices For Traveling Into the Night Sky (Bear & Co, Santa Fe, 1997]

Knights Templar researcher Jeff Nisbet has discovered an Orion correlation in Scotland. To very briefly sum up the template: the islands of Fidra, Lamb, and Craigleith located off the southern coast of the Firth of Forth represent the belt stars of Alnitak, Alnilam, and Mintaka respectively. Northeast of the belt, the Isle of May correlates to Bellatrix. Northwest of May on the Fife Peninsula a few miles south of Eden River once lay a stone circle called the Dunino Circle, now lost. If again found, this may correspond to Betelgeuse.

A line drawn northwest between May and the hamlet of Dunino comes to rest at Dunsinane Castle of Shakespeare’s “MacBeth.” A line drawn southwest from May through Fidra leads to the famous Rosslyn Chapel. A second line drawn from May through the Lamb leads directly to Tara in Ireland, an even more remarkable geomantic feat. A third line drawn from May through Craigleith leads to Temple, Scotland’s earliest known headquarters of the Templar Knights. Due south of Craigleith is the Castle of Yester, which corresponds to Rigel (Orion’s left foot). A line drawn from this isle through Yester intersects the Cisterian Abbey of Melrose to eventually reach the Glastonbury Tor in England.
For more on this excellent research, see Jeff’s Web site: mythomorph.com - The Pyramids of Scotland

According to the Czech magazine WM, three pyramids of stone perfectly mirror the belt stars in Montevecchia, a town in northern Italy about 40 kilometers from Milan. The highest of these pyramids is 150 meters tall. Identified by satellite and aerial imagery, these structures so overgrown with vegetation that they were originally mistaken for natural hills are thought to be over 3,000 years old. http://farshores.org/a03ipyr.htm and http://farshores.org/a03ipyr2.htm

Patrick Conlan has discovered another correlation to Orion’s belt in Ireland at Loughcrew, located three miles from the town of Oldcastle, County Meath. Running for three miles northeast to southwest along a ridge 700 feet high, three evenly spaced peaks are located with the western one slightly offset—similar to Mintaka. Nearby are 5,000-year-old cairn tombs, or passage graves, together with rock art. One stone with star glyphs apparently represents these peaks. http://conlanabu.com/

In addition, three henges located at the Thornborough Neolithic Monument Complex in North Yorkshire, England correlate to the belt stars. This template is arranged similar to the Arizona Orion, with his head pointed southwest. http://thornborough.ncl.ac.uk/index.htm

Other promising candidates for sites corresponding to Orion need further research. For instance, southwest of X’ian in China’s Shensi Province is a pattern of large ancient pyramids constructed of clay that appear to mirror the belt stars. http://www.earthquest.co.uk/articales/theory.html

The Jordanian author Rami Sajdi posits that the belt stars of Mitaka, Alnilam, and Alnitak correspond to the Middle Eastern sites of Jerusalem, the Essene community of Masada on the Dead Sea, and Petra respectively. http://www.acacialand.com/orion.html

Besides providing the exact pattern for locations of temple complexes or sacred cities, the rising or setting stars of Orion were incorporated into the archeo-astronomy of megalithic construction. The Bighorn Medicine Wheel, for instance, is a stone circle about seventy-five feet in diameter with twenty-eight spokes. It is located upon a promontory on the western slope of the Bighorn Mountains in Wyoming at an altitude of over 9,600 ft. The circle is adjacent to a number of line-of-sight cairns that forms astronomical alignments. The heliacal rising of Rigel is marked by one cairn. The helical risings of Aldebaran in Taurus and Sirius in Canis Major are also aligned with specific cairns, and each event is separated by twenty-eight days—the lunar cycle.
Medicine Wheel, Wyoming

In Guatemala, the archaeologist José Fernandez determined that all of the primary temples at the Postclassic Quiche Maya site of Utatlán (established about the time the Hopi Mesas were first being settled in Arizona) were oriented like the Nazca spider to the heliacal setting points of the stars in Orion. [José Fernandez, "A Stellar City: Utatlán and Orion," paper presented at the international symposium "Time and Astronomy at the Meeting of Two Worlds," Warsaw, 27 April-2 May 1992; see Graham Hancock, Heaven’s Mirror: Quest for the Lost Civilization, p. 35.]

Also, recent study of the eponymous Great Zimbabwe located in the country formerly known as Rhodesia shows that on the winter solstice three bright stars in the constellation rise over three stone monoliths on the eastern arc of the Great Enclosure. http://www.newscientist.com/article.ns?id=dn3137

The ultimate purpose of these earth-sky reflections scattered across the globe remains elusive.

“Is it possible that the incorporation of a ‘celestial plan’ in ancient and mysterious monuments from many different parts of the world, and a particular focus on the three stars of Orion’s Belt... could be parts of a global scientific legacy passed on by a lost civilization of very remote times?”

The above quotation from Graham Hancock’s Fingerprints of the Gods is part of the caption for a photograph depicting a huge spider “geoglyph.” Made in the desert like by removing the darker colored pebbles in order to leave exposed the lighter ones, this earth sculpture found on the Nazca Plain in southern Peru is 150 feet long.

The German mathematician and astronomer Maria Reiche studied this and other Nazca figures and lines for over forty years. She believes that the spider’s legs were shaped to represent the outstretched limbs of Orion with its waist forming his belt. Nazca spider

She furthermore posits that a particular line intersecting this anatomically correct arachnid from the Amazon jungles was oriented toward the heliacal setting of this constellation, perhaps for the purpose of coordinating solar and lunar calendars.

The spider figure is located close to what is known as the Great Rectangle, a geometric form of which has associations with Orion. Located nearby, an anthropoid figure deemed “the Owl Man” also bears an eerie resemblance to the Hopi god of death and the Underworld named Masau’u, who also has associations with Orion. http://www.morien-institute.org/nazca5.html (See a picture of Masau’u: http://www.theorionzone.com/outline.htm.)

The list goes on. As we have seen, either Orion’s pattern in the sky is reproduced by human-made structures on the ground or the rising and setting of Orion’s stars are lined up with astronomical markers. Various cultural sites in Peru, Mesoamerica, North America, Great Britain, Ireland, Europe, Africa, and Egypt along with other locations across the globe concentrate on this particular constellation with an archetypal intensity.

Probably not all of these sky-ground patterns are valid. Still we must still ask the question: Is this merely a series of colossal coincidences or are we witnessing a worldwide Orion legacy that was propagated long ago by a single cohesive force or intelligence? Are these correlations just the result of the collective unconscious or are they the manifestation of a deliberate, unified celestial plan? Are the Orion Correlations merely the intense need for humans to find patterns in the cosmos, or are they the inheritance of some lost super-civilization or even a gift from the stars?

Orion strides across the cold winter sky in stoic silence.

Excerpt from The Orion Zone: Ancient Star Cities of the American Southwest
Copyright © 2006 by Gary A. David. All rights reserved

Gary A. David is an independent researcher and writer living in northern Arizona. The Orion Zone: Ancient Star Cities of the American Southwest is now available from Adventures Unlimited Press. This book discusses a correlation between the stars of Orion and the Hopi villages and ruins in the Four Corners region of the US. (See http://www.theorionzone.com.) Recently Mr. David’s articles have appeared in Atlantis Rising, Fate, and World Explorer magazines.