Goldman Sachs doing God's work, blesses the invasion of Europe as good for the German economy 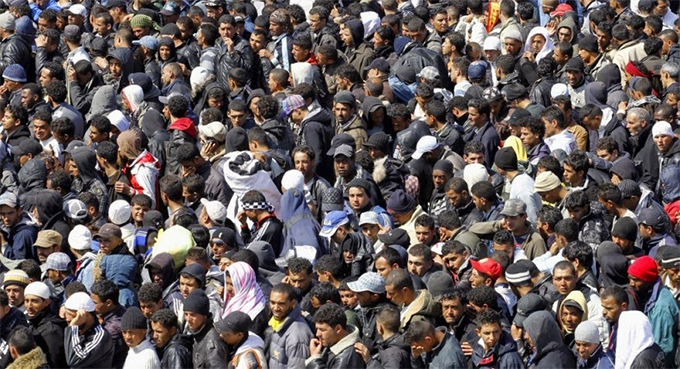 While it’s in no way out of the ordinary for a sitting Democrat to trumpet a set of beliefs that diverge markedly from the views espoused by the GOP frontrunner in the lead-up to an election, the extent to which the Obama administration’s position on immigration differs from Republican hopeful Donald Trump’s vision for border control is truly remarkable. The President has of course pushed for reforms which shield non-violent immigrants from deportation while Trump argues that anyone who didn’t come to the country via legal channels should be politely shown the door.

The fact that these two positions are so diametrically opposed underscores the extent to which immigration will likely be the most rancorous, contentious and divisive topic on the campaign trail on the way to elections in 2016 and make no mistake, this debate has very real implications for the US economy. 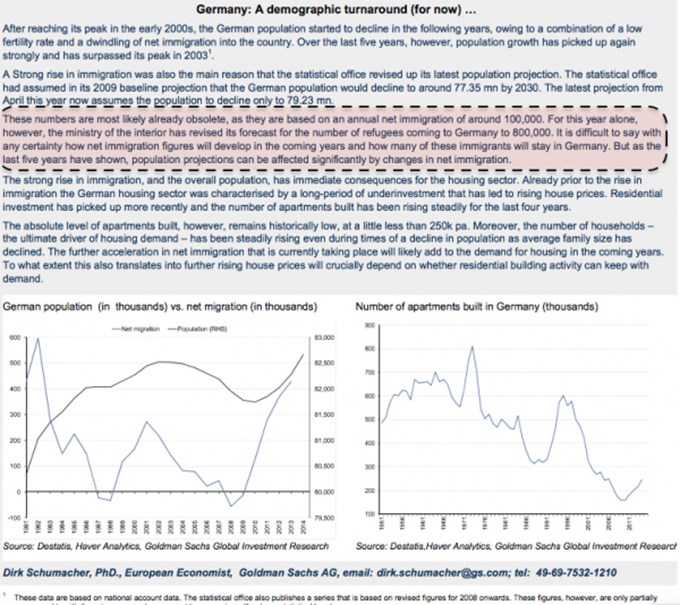 The immigration debate in the US and the jobs data shown above highlight the extent to which demographics are critical if we want to understand social and economic outcomes. Looking beyond the American political circus and the US jobs market, Japan is staring down a well-documented demographic nightmare while, as discussed here previously, China faces the end of its "migrant miracle" as the country approaches its Lewis turning point. Meanwhile, migrant flows have become perhaps the most talked about issue across Europe.

The point: demogrpahic shifts, whether gradual or sudden, whether wholly domestic or emanating from some exogenous shock (like say a horrible US foreign policy outcome) matter - and they matter a lot.

It's with that in mind that we turn to Europe, where a refugee crisis sparked in large part by Syria’s four-year old, bloody civil war recently reached a tipping point and the scramble to find a workable solution both in terms of allocating asylum seekers and finding the funds to accommodate them has become the single most pressing challenge facing European policy makers. Here’s the latest from BBC:

Germany can cope with at least 500,000 asylum seekers a year for several years, Vice Chancellor Sigmar Gabriel has said.

Germany expects more than 800,000 asylum-seekers in 2015 alone - four times the 2014 figure. Mr Gabriel reiterated that other EU states should share the burden.

The UN's refugee agency, UNHCR, says a record 7,000 Syrian migrants arrived in Macedonia alone on Monday and 30,000 were on Greek islands.

The migrants, mainly Syrians, are engaged in a long trek which takes them from Turkey, across the sea to Greece, through Macedonia and Serbia, and then to Hungary from where they aim to reach Austria and Germany. 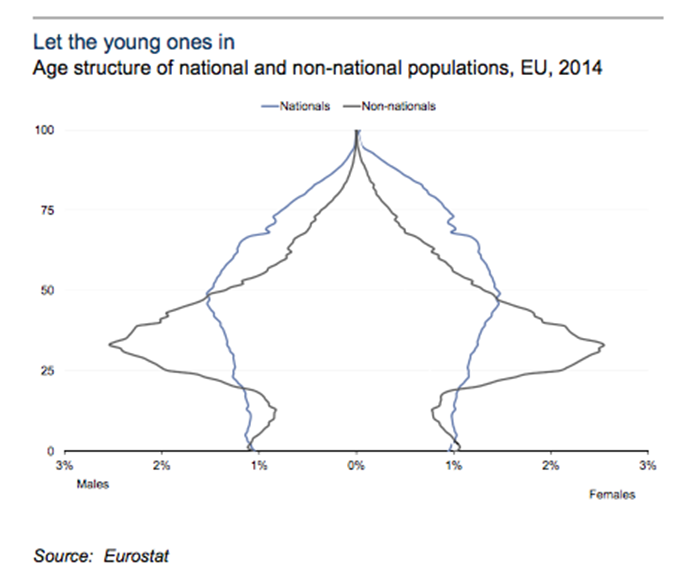 Hungary's conservative leadership is building a border fence to try to keep them out, but German politicians have expressed pride in crowds who welcomed new arrivals.

A Greek minister said on Monday that the island of Lesbos, which sits off the Turkish coast, was "on the verge of an explosion" due to a build-up of 20,000 migrants.

The EU is due to unveil proposals on Wednesday to distribute 160,000 refugees among member states on a mandatory basis.

And while it may be difficult for anyone to find the silver lining amid the chaos (especially when pictures of dead children are being trotted out as proof of why the West urgently needs to intervene further in Syria thus ensuring the situation becomes even more unstable than it was before), the implications of such a dramatic migration will be felt for generations to come and in some respects Goldman says more immigration may in fact be just what Western Europe needs. Here's more:

Whichever way we slice the data, the growth in working age population stands out as a key driver of economic growth for most countries. A healthy dependency ratio, a skilled workforce, together with strong institutions and an absence of major resource imbalances is usually the formula for country-level success. But with most DMs weighed down by ageing populations, a key question is this - can people inflows can counter challenging demographics? The short answer is yes, but only up to a point...

The rising concerns on ageing have unsurprisingly been accompanied by more accommodative policies on immigration; the number of countries with stated plans to grow their populations via immigration has gone up to 22 as of 2013, from 10 in 2010 (note that immigrants also tend to have higher fertility rates).

But for many countries, people inflows are only part of the solution. In order to maintain current levels of retirees/working age population ratios in 2025, immigration rates in Western Europe need to be 7x-8x higher than current run rate (based on UN estimates), while in Japan and Korea, the requirement goes up to a highly improbable 26x and 58x current levels. 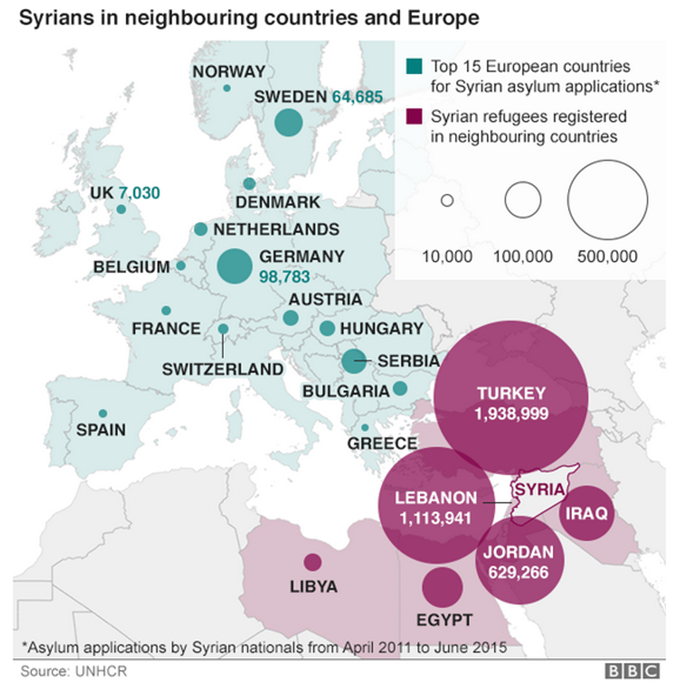 Now consider what was said above about the magnitude of Germany's refugee accommodation (i.e. that the country is set to take in some 500,000 asylum seekers per year), and then consider the following from the same Goldman note: 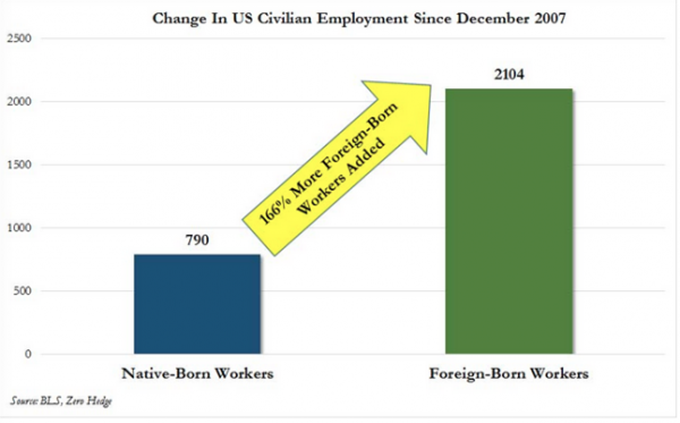 Obviously, it's far too early to draw any sort of concrete conclusions about what effect - positive or negative - the influx of Syrian refugees will have on Western Europe. Moreover, the societal and economic impact of people inflows is at least to some extent dependent upon what skills immigrants bring with them. To expand on Goldman's discussion of the so-called "skill fill", the question might be this: to what extent can immigrants help fill skills gaps in DM economies created by deteriorating demographics? Of course we must also consider what effect second- and third- generation immigrants may end up having on receiving countries' economies (i.e. does the original migration end up vicariously conferring a substantial benefit on the society of the receiving country and if so, how?).

We'll leave those questions to readers and simply close by pointing out (again) the tragic irony inherent in France's suggestion that the proper response to the current refugee crisis is for the French military to bomb Syria. That either represents an utter inability on the part of the French government to understand the West's role in destabilizing Syria in the first place, or, more likely, the latest example of how one way or another - via YouTube gas attack videos or via heart-wrenching pictures of desperate migrants fleeing the violence - the US and its allies are determined to find the right mix of propaganda to justify a ground incursion. And that's the real tragedy here: the pitiable plight of Syria's beleaguered masses will be used as an excuse to cause them still more pain and suffering.